A multicopter made from continuous carbon fibre-reinforced plastics 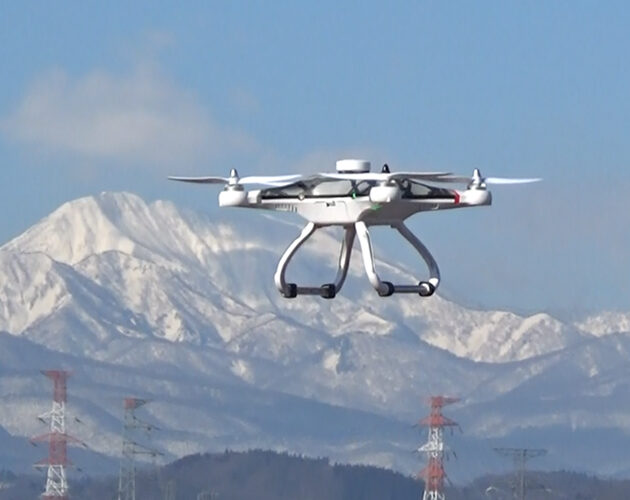 ln recent years, unmanned aerial vehicles (drones) have become widespread in a wide range of fields, from industrial use such as agriculture, infrastructure inspection and disaster investigation, to leisury use. There are various types of drones, but the mainstream is a multicopter with four or more rotors to control movement and altitude. A multicopter fuselage has to be both lightweight to increase the payload and high in rigidity to support thrust.

Although the structure is easy to manufacture, certain issues must be taken into account such as the increased weight due to the joining of multiple parts and a restriction on the body structure due to the shape of the material.

To achieve both lightness and functionality, manufacturing the airframe using three-dimensional CFRP moulding is ideal. By optimizing the material arrangement, a certain quantity of unnecessary materials can be eliminated, and the fibres can be oriented to use the anisotropy with respect to load.

The collaboration team designed the initial shape of the upper half to be analysed, using the existing airframe as a base. While the existing airframe design had edges, they redesigned it with smooth, continuous curved surfaces and a sufficient draft angle, while taking the moulding’s workability into account. The centre is flat to accommodate a GPS receiver antenna.

The existing airframe is made of approximately 1.5 mm thick ABS resin and has a fully-enclosed bag-like monocoque structure. For this reason, a shell was used as an analytical model, with a thickness of 2 mm for design scope calculations. As carbon fibre will be placed on the flat area around the GPS antenna, this area was not included in the design scope. The airframe is made up of the top and bottom halves of the body, which are connected by multiple joints and screws. A fastened state was modelled by linking the screw position elements.

When hovering in mid-air during flight, the airframe is subjected to various forces that are difficult to measure or estimate. In this project, as a model case without using actual conditions, the team secured the base to which a load would be attached and created conditions (load cases) for six different load/torque variations applied to the tip of the arms in four corners, where the rotors are located. Then, the shape producing the highest rigidity in the six different load cases was determined. The analysis results mentioned here are optimization results, strictly for the particular model case, and cannot be applied universally to actual machines.

The results of the optimization that took all six load cases into account led to a shape entirely covered by a relatively even mesh pattern. Setting multiple boundary conditions may have led to a result with potentially high versatility. The results of this analysis are finite element mesh data and cannot be used as CAD data. Consequently, an improved airframe shape was reconstructed according to the results.

How it’s made: the TFP method

Tailored Fibre Placement is one of the methods used to create preforms, in which a bundle of continuous long carbon fibres is sewn to a base cloth.

Although this method has been put to practical use in applications such as aircraft parts, few cases have been commercialized in Japan and future business development can be expected by establishing the technology early. In this study, the aircraft was strengthened by arranging CF according to the optimization results using this method, without losing the anisotropic features.

Because the preforms are fabricated in a flat format, they must be designed in such a way that the shapes they take after moulding are flat and unfolded, so that they can recreate a 3D shape inside a die during the moulding process.

To produce TFP preforms, data was created for the embroidery machine, defining the paths for placing the CF bundles.

In order to continuously supply and hold in place the CF, all the paths must be traced in a single stroke. As TFP requires a special embroidery machine equipped to supply CF, the production was outsourced to two companies with the right equipment: Tajima Industries and Kajirene. Glass fibre cloth was used for the base, and 3 mm-wide CF was stitched along the TFP paths. The CF banding was held in place by a white embroidery thread.

VaRTM is a resin transfer moulding (RTM) technology in which moulds are used for shaping and vacuum pressure suction is applied during the impregnation of the liquid resins. A preform was set in a single-sided aluminium mould (the female die of the airframe outer surface) and sealed with a bagging material. Vacuum suction was used to assist the impregnation of the thermosetting resin, which was then cured in an autoclave. The first prototype has zigzagged fibres due to the slightly oversized preform. To correct this, the size was adjusted during the design stage of the second prototype by changing the value of the preform centre plane offset from the airframe surface.

The first prototype had quality issues, including insufficient resin impregnation into the carbon fibres and residual airspace and voids in the CF bundles. These issues were dealt with by the following strategies in the vacuum bagging, impregnation and autoclave processes: changing the glass cloth cutting technique; reducing the resin viscosity; reversing the mould side in which the preform sets; and changing the impregnation technique.
As a result, the impregnation into the glass cloth was better, but there were more voids on the surface and in the interior of the CF bundle.

Further studies are required to improve the quality of the moulded parts. An experiment was conducted to fly the aircraft and evaluate its practicality. A pilot tested the manoeuvrability. The result was satisfying as the responsiveness during steering was better than with an ABS resin aircraft.

Combining topology optimization and CFRP materials is expected to provide high-performance structural parts that achieve both light weight and high rigidity. This study verified that the optimized structure can be formed as a three-dimensional CFRP by using a TFP preform on a multicopter body. In the future, broad application to various products, beginning with the aerospace sector, can be expected by accumulating know-how in preform design and CFRP moulding methods.