Quentin Vlamynck and his crew came out on top in Roscoff in the Final Rush, and so won the 2nd edition of the Pro Sailing Tour on Arkema. At the helm of this Ocean Fifty class trimaran for the 2nd year, Quentin Vlamynck has now carved his place as a highly talented skipper in this very demanding circuit, where competition is at its fiercest. 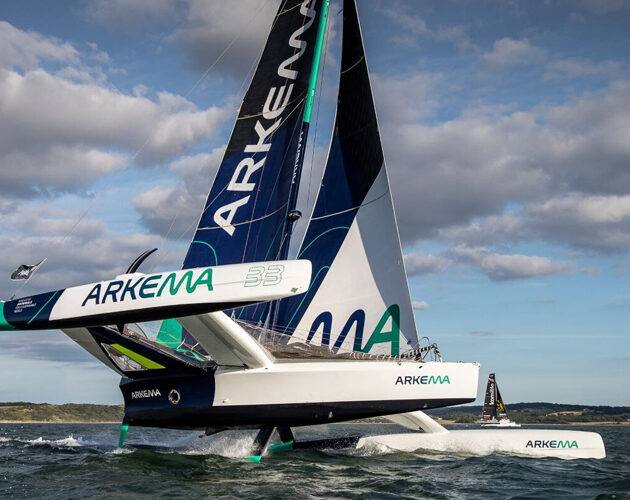 Consistent cohesion within the crew coupled with outstanding tactical sailing helped Arkema race to victory at the end of the 3 episodes – Bonifacio, Brest, Saint-Quay-Portrieux – and this Final Rush. A huge reward for the 29-year old skipper in the run-up to the major event, sailing solo in the second part of the season in the Route du Rhum – Destination Guadeloupe race.

Sailing off from Cowes on Wednesday 7 July at 8pm French time heading for Roscoff, passing the coast of Ireland, Quentin, Étienne Carra and Mayeul Riffet were brilliant over the 940-mile course in ideal sea conditions.

As they sailed into the Bloscon harbour in Roscoff, Quentin Vlamynck showed his pleasure and satisfaction at winning this final crew race: “Once again it was very intense sailing right from the start. We quickly took the lead of the fleet, and all we had to do then was keep our competitors in check! But it wasn’t easy because the conditions were more favourable for those at the rear, and it was nerve-wracking. We had to remain strong and steady so as not to make any mistakes. It’s really great to win this Final Rush. This is a fitting tribute to our consistency over the entire Pro Sailing Tour.”

Between Corsica, Brittany and England, the Arkema Ocean Fifty indeed excelled in consistency in the various episodes of the Pro Sailing Tour 2022. Whether in the inshore or offshore races, Quentin Vlamynck’s crew managed to win 14 of the 23 courses

“Our goal was to do better than last year, so we’ve fulfilled our contract! It’s a great collective success” Quentin Vlamynck, skipper of Arkema.