The Augsburg AI Production Network, founded in January, is an association of the University of Augsburg with the Fraunhofer Institute for Foundry, Composites and Processing Technology IGCV and the Centre for Lightweight Production Technology of the German Aerospace Centre (DLR). The aim is joint research into AI-based production technologies at the interface between materials, manufacturing technologies and data-based modelling. One application example where artificial intelligence can support production processes is the machining of fibre-reinforced materials. 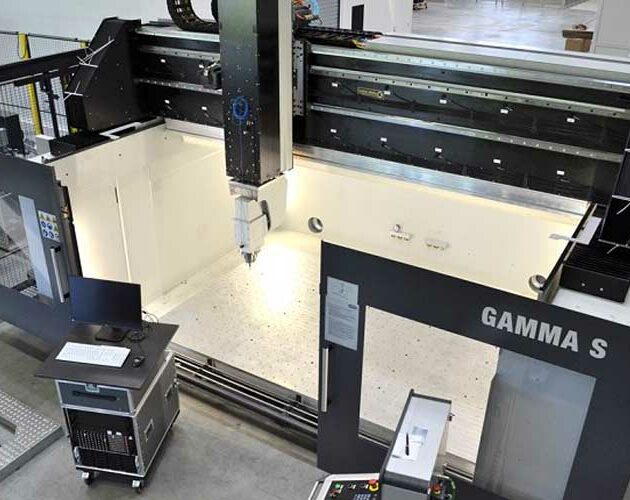 In the newly established AI Production Network, scientists are researching how artificial intelligence, AI, can optimise production processes. Many steps and facets of industrial production are being considered.

At the end of many value chains in aerospace or mechanical and plant engineering, for example, machines process the final contour of components made of fibre composites – a process that places high demands on the milling tool. Sensor systems that monitor and observe the process create optimisation potential here. Researchers at the University of Augsburg are currently using artificial intelligence to evaluate data streams that arise during CNC milling.

Research on such supposedly detailed process steps is relevant because industrial manufacturing processes are often highly complex, so that many factors influence the result. Equipment and machining tools wear out quickly, especially with hard materials such as carbon fibres. The ability to recognise and predict critical degrees of wear is therefore essential in order to be able to deliver high product quality. Research on an industrial CNC milling machine shows how suitable sensor technology coupled with artificial intelligence can deliver such forecasts and improvements.

Structure-borne sound as an indicator

The sensors are the “sensory organs” of the CNC milling machine. Most modern machines have some basic sensors already built in which record energy consumption, feed force and torque, for example. However, this data is not always sufficient for the resolution of fine details. For this reason, sensors for structure-borne sound analysis were developed at the University of Augsburg and also integrated into an industrial CNC milling machine. These sensors detect structure-borne sound signals in the ultrasonic range that are generated during the milling process and propagate in the system to the sensor. The structure-borne sound allows conclusions to be drawn about the state of the machining process. “This is an indicator that is as meaningful to us as bow strokes on a violin. Music professionals can tell immediately from this whether the instrument is in tune and how well the person playing it has mastered the instrument,” explains Prof. Dr. Markus Sause, director of the AI ​​Production Network

However, so that the milling process can also be optimised from the recording of the signal, the researchers working with Sause make use of what is known as machine learning. Certain characteristics of the acoustic signal can indicate an unfavourable process control, which points to poor quality of the milled component. As a result, the milling process can be directly adjusted and improved with this information. For this purpose, an algorithm is trained with recorded data and the corresponding states (e. g. good or bad machining). The person who operates the milling machine can then react – he is either presented with status information – or the system is programmed to react independently.

Machine learning can not only optimise the milling process directly on the workpiece, but also plan the maintenance cycles of a production plant as economically as possible. Functional parts should work in the machine for as long as possible in order to increase economic efficiency, but spontaneous failures due to damaged parts should be avoided.

Predictive maintenance is an approach in which the artificial intelligence calculates from the collected sensor data when a part should be replaced. In the case of the CNC milling machine under investigation, for example, an algorithm recognises when certain characteristics of the sound signal change. In this way, it not only identifies the degree of wear on the machining tool, but also predicts the right time to replace the tool. This and other artificial intelligence processes are being incorporated into the AI ​​Production Network that is currently being created in Augsburg. Together with other production facilities, a network is to be created that can be reconfigured in a modular and material-optimised manner.