The e-tron range is the spearhead for values upheld by the Audi brand: performance, design and electric motorisation. While the Audi e-tron SUV was kindling interest from electric vehicle lovers, the German brand unveiled its electric bicycle, or e-bike, the Wörthersee. 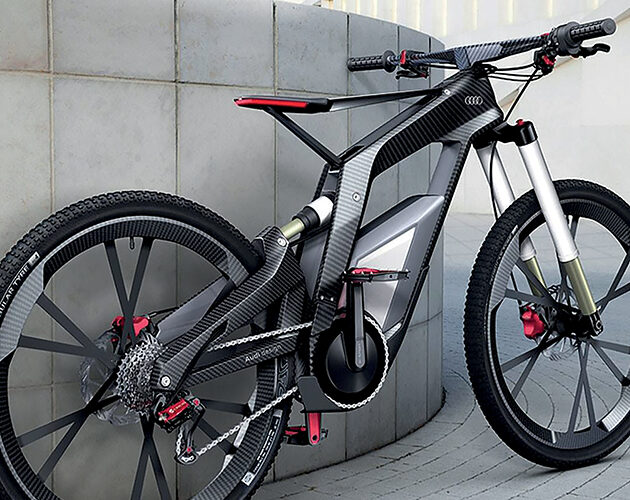 At first glance, what grabs people’s attention with the Audi e-bike is its exacting design suggestive of technical sophistication and power. Its ultralight frame is made of carbon fibre, contributing to its minimalist, immaculate aesthetic. But beyond external appearances, this electric bicycle’s performance is what distinguishes it from the rest of the models on offer.

An e-bike with all the features of a speedster Audi has unveiled its ultra-high-performance electric bicycle with a concept that’s like no other. Driven by a 2.3kW electric motor integrated to the pedal assembly, providing a torque of 250Nm, the weight of this e-bike from Audi is a mere 21kg. Its weight comprises an ultralight carbon fibre frame (1.6kg), two wheels made from CFRP (600g each), and a lithium-ion battery operating at 48V mounted directly in the frame (5kg).

Its light weight, combined with high-performing motorisation, enable Audi to put forward impressive mechanical performance. The e-bike user can choose between several programmes according to how they use the pedals, or rely on partial to full electric assistance to move forward. In “Pure” mode, the bicycle is propelled by the natural force of the rider’s legs. “Pedelec” is the mode for electric assistance, where the feature can take the user speeds of up to 70 km/h with a range varying from 50 to 70 km.
There’s also the “eGrip” mode, in which the engine is activated without requiring the user to pedal, via an accelerator a top speed of 50 km/h, and finally the “Wheelie” mode.

This mode is activated when the front wheel is in the air (performing a trick), and is supplemented by two submodes (“Power Wheelie” and “Balanced Wheelie”) to accommodate the user’s level of experience.

Range and onboard equipment The lithium-ion battery is mounted onto the frame and can be removed entirely. It weighs around 5kg and operates at 48V, providing this electric bicycle with 530wh of energy. It can be fully recharged in two and a half hours using a standard 220V outlet and boasts a range of 50-70km.

From a cycling point of view, the Audi e-bike is very well-equipped and above all, promotes its safety features. Front and back brake discs are installed on a 9-speed derailleur. Programmes are controlled using a touch screen connected to a computer that’s integrated into the upper part of the frame. Accessible at the front of the structure, the touch screen allows you to manage the many operating modes available with the Audi e-bike.

Here, the features are designed for fun, because they allow you to connect with the cyclist’s smartphone. When the cyclist does tricks with the modes activated, the smartphone can automatically post them to Facebook and compare to other tricks or wheelies shared by the Audi e-bike Wörthersee community.

Th e Wörthersee e-bike from Audi is a bike that’s diffi cult to categorize, with performance close to that of a moped, and appeal to an audience that rides freestyle (“wheelie” function). Audi describes it as a high-end pedelec for sports, fun and tricks. At any rate, it’s a bike for enthusiasts and demanding clientele who can fork out around €21,000 if they’re interested in acquiring this atypical e-bike.