A £78,883 grant from BIG Productivity has kickstarted a huge boost in business for Cornish manufacturer, Piran Advanced Composites Tld. 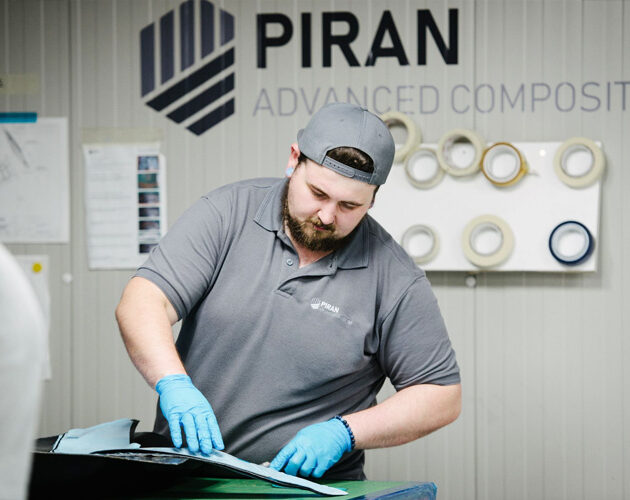 The Wadebridge-based form designs, engineers and manufactures advanced composites, mainly using carbon fibre. BIG Productivity funding has gone towards a new piece of machinery which can create master patterns to make moulds for aircraft parts. The new five axis CNC equipment has allowed Piran Advanced Composites to get involved in a number of high-profile projects, as well as increasing in-house production levels.

In addition, staff numbers at the business – established in the mid-1990s – have grown from five to 30 in the past 12 months. It’s hoped there will be opportunities to expand business even further, with the chance to take on apprentices in September.

Piran Advanced Composites also recently acquired a large space at Cornwall’s Enterprise Zone, the Aerohub in Newquay and has plans for further developments. Company boss Mawgan Searle said the BIG Productivity grant had come at the perfect time for the growing firm, set up by his father Joff.

Mawgan Searle, CEO at Piran Advanced Composites said: “Something we were doing on a relatively small scale has now become our core business. Receiving the grant from BIG Productivity set everything in motion and enabled us to bring in new projects on a larger scale.”

Piran Advanced Composites originally manufactured and repaired composites for the RNLI but has evolved to be at the forefront in the development of ultra-lightweight carbon fibre structures for world-leading technologies and aircraft.

The company recently used the new machinery to make parts for a new solar-powered, British made drone that can carry out surveillance from the stratosphere.

The PHASA-35 has a wingspan of 115 feet—the same as a Boeing 737—but it weighs just 330 pounds.  The aircraft, being jointly developed by BAE Systems and Prismatic, recently successfully completed a critical endurance test.

Mawgan said being involved in such ground-breaking projects was great for the company but also helped to raise Cornwall’s profile in the engineering and aerospace world.

“This is real chance for us to bring a completely different industry to the region,” he said. “Thanks to BIG Productivity, we are one of the most innovative companies in Cornwall with this specialist capability,” he added, explaining that the equipment runs on site for up to 20 hours a day.

“It’s an integral part of our business and what we have been able to do has been incredible.”

Over the past few years, Piran Advanced Composites has also taken advantage of other business support opportunities in the region. As well as research and development funding from Aerospace Cornwall, it has worked closely with Oxford Innovation. The business has also been supported by BIG Productivity’s Advanced Advisory Service which offers strategic, non-financial support to Cornish SMEs.

Lyn Newby, BIG Productivity’s programme manager, said: “Piran Advanced Composites Ltd has worked on world-leading projects in a variety of industries and is one of the leading advanced composite facilities in the South West. We are thrilled that this investment from BIG Productivity will retain work in Cornwall and support the company’s continued growth.”

BIG Productivity is supported by the European Regional Development Fund (ERDF) as part of the Cornwall and Isles of Scilly Growth Programme and is delivered by Cornwall Council.