In Hamburg, a team of leading companies in the aviation industry is developing nothing less than the future of aircraft construction. As part of the BiSconA project, a further “EcoPositioner” for tailor-made component positioning was delivered to the ZAL Center of Applied Aeronautical Research. Broetje-Automation is thus celebrating the 250th delivery of this modularized and high-precision positioning system specifically developed for the aviation industry. 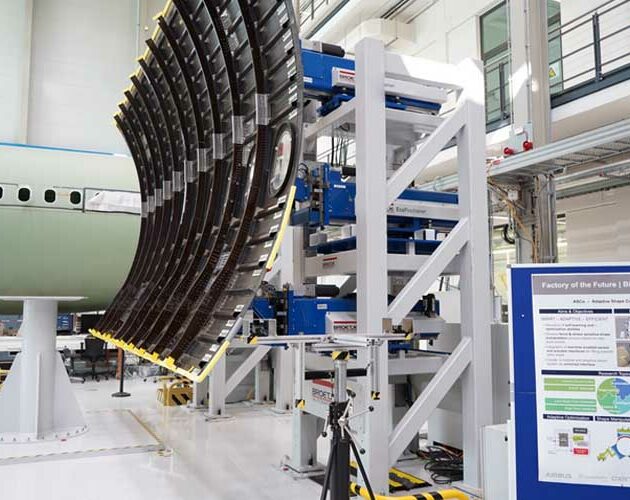 Together with ZAL and other partners, Broetje-Automation is working on the “BiSconA” project funded by the Federal Ministry for Economic Affairs and Energy to develop an automated “built-in  stress” compliant joining process for aircraft fuselages that sets standards in terms of accuracy and speed of the assembly process and ensures the stress-free condition of the fuselage over the entire assembly process. The positioning technology within the project is delivered by Broetje-Automation.

With the delivery of the “EcoPositioner”, Broetje-Automation has now celebrated a special anniversary: 250 EcoPositioners are already in use worldwide. In addition, there are more than 150 other positioning systems from Broetje-Automation ensuring efficient production in the aviation industry for international customers around the globe.

In addition to the supply of positioning technology, Broetje-Automation is developing a modular adaptive gripper system and a digital image of the production environment in the BiSconA project (“Built-in  Stress  conformal  Assembly”) and implements self-learning algorithms for continuous process optimization with a standardized control architecture and the integration of real-time measuring interfaces. Through this optimization and simultaneous digitization of the assembly of CFRP aircraft components, the performance and efficiency of the production processes is increased significantly. The project represents an important milestone on the way to the digitized Factory of the Future.

With the delivery of the 250th EcoPositioner as part of the project, the ZAL TechCenter has now been expanded with a sixth horizontal positioner. As early as 2016 Broetje-Automation delivered a test stand to the research center,  where the positioning systems have been further developed and optimized since then. The EcoPositioners have been part of company’s portfolio since 2010, after a publicly funded research project in 2009 gave the go-ahead for the development. As early as 2010, the positioners were able to convince with the first customer project in Europe. This was followed by the launch on the markets in Russia and China in 2011. Since then, the EcoPositioners have firmly established themselves in the product portfolio with numerous customers worldwide.

The positioning technology can thus be used for a variety of manufacturing processes, such as the assembly of fuselage sections, the section joining to the fuselage or the attachment of wings and tails to the fuselage.