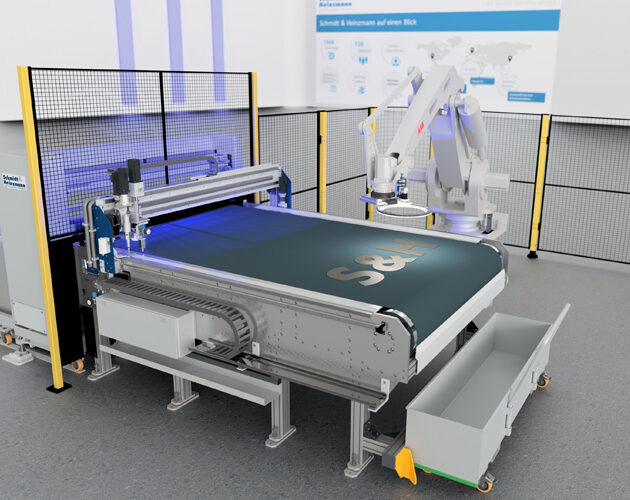 The system, which detects the positioning and orientation of carbon fibers, will be used in the automated production of CFRP components in the future. It will be integrated directly into the company’s cutting & stacking cells, which cut fabrics from dry fibers and consolidate the individual layers into a stack. The award ceremony took place during the “JEC DACH Forum” on 29th November in Augsburg, Germany.

When cutting and stacking carbon fibers, it is crucial to know the position and orientation of the material, as these affect both a robust manufacturing process and part quality. Until now, position and orientation have been measured either with conventional camera systems or by using laser or color sensors. When using conventional camera systems, homogeneous illumination of the recording area is necessary due to the reflection of the carbon fibers, which is difficult to implement, especially with large components. Laser and color sensors only provide point measurements along the material edge. The uneven edges of the carbon fibers result in significant measurement errors, which also makes this technique unsuitable.

Schmidt & Heinzmann’s camera system takes advantage of the polarization properties of the carbon fibers, which means that the light reflection and absorption of the fibers are irrelevant. The system determines the change of intensity with respect to the polarization direction. This relative value can also be determined under changing lighting conditions. A newly developed software then separates the resulting image into polarized an unpolarized areas. This allows the background to be hidden and the component contour to be measured. With an accuracy of± 0,38 mm, the system performs significantly better than conventional systems with an accuracy of ±4 mm.

Camera system significantly reduces the use of resource

When using the camera system, users benefit above all in terms of sustainability. Precise contour determination on the NC cutting table allows reduction of edge trimming by up to 85%. When stacking the cuts, the individual layers can be placed on top of each other even more precisely. This exact positioning is a prerequisite for producing preforms with final contour. Therefore, trimming of the components is no longer necessary in the wet compression molding process, for example, which saves 5 – 10% of the raw materials used (carbon fibers and resin). By eliminating the two process steps “trimming” and “sealing”, investment costs as well as energy costs of these sub-steps can also be saved.

Another innovation award for Schmidt & Heinzmann

With this award, the company has already received its fourth innovation award within 2 years. “We are pleased that another innovation from our product area “Cutting & Stacking” has been awarded,” says CEO Matthias Feil, “especially as the market acceptance for this product is very good so far. The first systems have already been sold, others are in the quotation phase.” Last year, the Cutting & Stacking solutions themselves already won the ThinKing Award from the Landesagentur für Leichtbau Baden-Württemberg (State Agengy for Lightweight Design. The innovative semi-finished production line “Cube“ was selected as one of the finalists at the “JEC Award” and the company was named a “Top 100 Innovator”.