As part of our Women in Composites series we caught up with Céline Largeau at JEC World 2022 to find out how a passion for cars has taken her from Formula 1 to her current role as R&T Project Manager/Development Manager Wind Energy Sector at IRT Jules Verne. 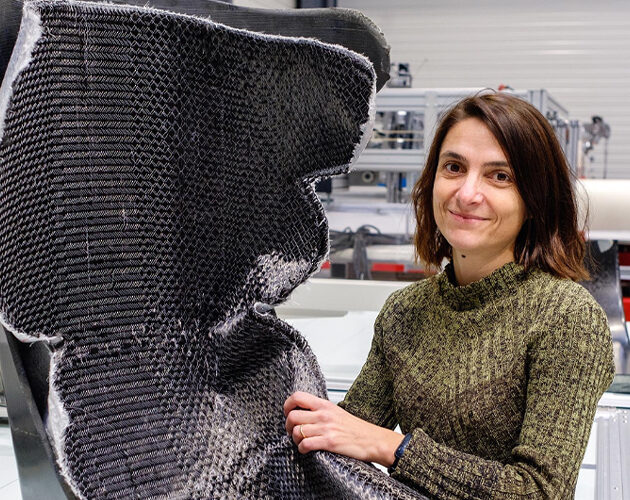 It’s no surprise that Céline Largeau became an engineer. Her father loved cars and he passed that passion on to his daughter.

“When I was a kid I never played with a Barbie,” she remembers. “My Dad bought me toy cars to build. I was always working with him on his old cars and he encouraged me to do engineering at university.”

She went ahead to study mechanical engineering at École Nationale Supérieure de Mécanique et d’Aérotechnique (ENSMA), near Poitiers, in France, including an option in combustion to satisfy her interest in engines. Back then, nearly 25 years ago, composite materials were not covered in her course – it was all about metal.

A first in Formula 1

After graduating, Largeau gained a place in automotive history, becoming the first female engineer in the Renault Sport Formula 1 team based in Viry-Châtillon. It was here she discovered composite materials.

“I was hired as a combustion engineer, but it was a chance to work on a car built using carbon fibre composite. I was there between 2001 and 2007 and it was a great time as this was when Renault became World Champions.”

Her experience as the only woman in the team was good.

“They welcomed me. I was a little nervous when I arrived, but the technicians especially were very nice to me. They were passionate about the cars, and so was I. They taught me the job and I learnt a lot. “

In 2007 she moved into the Renault group as a project manager, again working with engines, and in 2011 she relocated with her family to Nantes and accepted a role at automotive supplier Tristone Flowtech in Carquefou. As Project and Marketing Manager for Hybrid and Electric Vehicles, Largeau was in charge of creating a new team to develop battery cooling systems, creating new products by replacing metal parts with thermoplastic alternatives. After four years at Tristone, her pursuit of innovation attracted her to a new position at IRT Jules Verne, an industrial research centre dedicated to manufacturing.

IRT Jules Verne’s mission is to accelerate innovation and technology transfer to industry.

“I was interested in IRT’s strategy to promote innovation in Europe,” Largeau says. “This was important for me because in my previous experience, in Renault group and Tristone, I saw a lot of innovation starting but not continuing because of the need for financial payback. In Formula 1 the focus on innovation and development was so exciting and IRT offered the possibility to do that again.”

In 2015 she joined IRT as R&T Project Manager and Land Transport Sector Development Manager and reconnected with composite materials when she was asked to manage a project to develop a low-cost carbon fibre. The objective of the FORCE project is to produce a carbon fibre costing less than 8€/kg. New precursors, including bio-sourced raw materials such as lignin and cellulose, are being evaluated as alternatives to polyacrylonitrile (PAN).

“In this project we are developing a new bio-based carbon fibre. For me this started to meet another inspiration for me, and that is sustainability. So I started to connect my passion for materials with innovation and with my green inspiration all together in that one job.”

This synergy between materials, innovation and sustainability continued to grow when, in September 2020, she was appointed Head of Wind Energy Sector Development and became involved in the launch of the ZEBRA (Zero wastE Blade ReseArch) project. In ZEBRA, IRT is collaborating with Arkema, CANOE, ENGIE, LM Wind Power, Owens Corning and SUEZ, to develop a 100% recyclable composite wind turbine blade. The partners announced the production of the first prototype blade in March 2022.

“I am growing with this project and new role as wind energy business manager,” Largeau explains. “I’m glad to work with very professional companies and people with such expertise in wind energy. In ZEBRA we are 7 partners working together. It is a lot of work, a lot of pressure, but it is good pressure, because we all have the same objective to develop the first 100% recyclable blade.”

“Maybe it’s a strange career path, coming from Formula 1 to wind energy, but it fits,” she observes. “With age my inspiration has changed. When I was younger competition and Formula 1 was great, now I’m looking to the future and the green economy. I have three kids and it’s important for me to work in something that will benefit the future. At school my kids are learning about circularity and they are proud of what I am doing. It’s great for me to really link my private and professional inspirations and thanks to IRT I am able to do this.”

Largeau is excited about the potential of many composite technologies.

“Hydrogen, carbon pultrusion, so many more,” she says. “Here at JEC World we have seen so many new developments, and new companies. In the FORCE project we are working on the industrial transfer of the R&D and it’s very exciting to be part of this new business development. A lot of business agreement is made during the show, so it’s very important for us to be here.”

But her main objective in visiting JEC World this year was to meet with all the partners in both projects.

“I think this year at JEC World it is most important to meet people again face to face. In the ZEBRA project the first time we met our partners was in February, after two years of online meetings.”

Women need to prove themselves more

Throughout her career Largeau has noticed that women are often under greater scrutiny than men.

“I think a woman needs to prove herself more than a man, not only in composites, but in general. Women engineers always need to prove their technical knowledge and skills a little bit more than the men, even if they have the same experience. This can be frustrating sometimes, but it can also push you to progress. Maybe it’s because there are fewer women we are more in the spotlight.”

“But it’s not only for composites,” she continues. “I have worked in Formula 1, in the automotive world, and there are fewer women. At my university engineering school they are seeing the number of girls decreasing. Girls don’t want to be engineers; my daughter doesn’t want to be an engineer. It is not attractive to them.”

But, she notes, it is possible for women who do have a passion for engineering to build a very successful career.

“If you are passionate about it, it is possible to succeed, and you may also find a woman who will help you. Before joining IRT I only worked with men. When I arrived in IRT, for the first time my boss was a woman, and she was very inspiring. My current boss is a woman and I have a female colleague with a similar role as me. At IRT I have discovered working with other women with a passion like me and it is a wonderful experience.”

Advice for a new job

When starting a new role, Largeau believes it’s essential to take the time to learn from your colleagues.

“I think it’s important for women, and men, when entering a new company, to listen, and learn. Be humble. You must have this period of two to three months where you simply learn. If you behave like this the people in the company, and especially the technicians, will like to teach you. Listen to them, watch what they are doing, maybe get involved in the work. They have a lot of experience and you need to learn from them. For me it was the best way. When I arrived in Formula 1, I did that. I told them I’m new, I don’t know anything, just teach me. And it was a fantastic experience.”