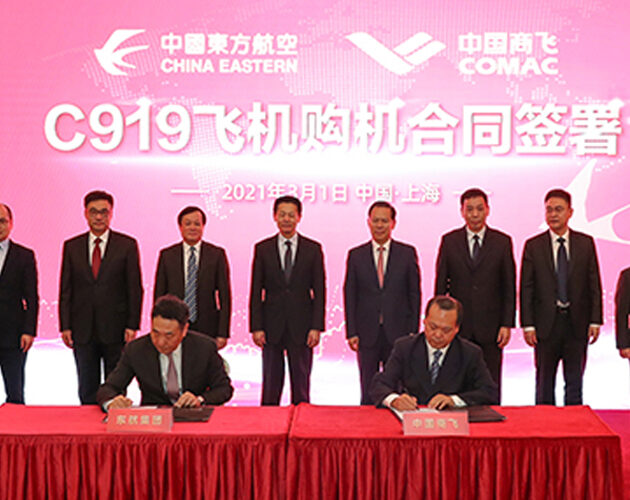 Five C919 aircraft would be introduced in the first batch, and China Eastern Airlines would become the world’s first airline to operate C919 aircraft. This is an important step for China Eastern Airlines in the introduction and commercial operation of the China-made trunk liner as a pioneer after the successful establishment of One Two Three Airlines (OTT Airlines) to operate China-made ARJ21 aircraft.

C919 aircraft is a large jet aircraft independently developed by China and owns independent intellectual property right. The aircraft has completed its maiden flight at Shanghai Pudong International Airport on May 5th, 2017.

China Eastern Airlines has been deeply involved in the design and development of C919 aircraft, trained and provided the first C919 flight crew to fly a jet as a companion during the maiden flight of C919 aircraft, and provided suggestions from the perspectives of customer use and maintenance. Relying on the industrial chain partnership and the geographical advantage of being both in Shanghai, China Eastern Airlines and COMAC have constantly promoted cooperation and innovation on the industrial chain, and jointly explored new practices in the commercial operation of C919 aircraft.

After the signing of the purchase contract, both sides would conduct docking as soon as possible and carry out all the preparatory work before the aircraft is put into operation, including supplementary operation certification of the new model of aircraft, training of professional personnel, signing of customer support and guarantee agreements, etc. Both sides would enhance cooperation in the areas such as aircraft import and export, material maintenance, logistics and warehousing, new technology application, material support, maintenance support and aircraft configuration optimization to ensure the high-quality operation of the first batch of aircraft.

According to the preliminary plan of China Eastern Airlines, the five C919 aircraft would be based in Shanghai and fly from Shanghai to Daxing District of Beijing, Guangzhou, Shenzhen, Chengdu, Xiamen, Wuhan and Qingdao to improve the market share of China Eastern Airlines in these markets and bring a “brand new experience” to the passengers of the China-made aircraft.