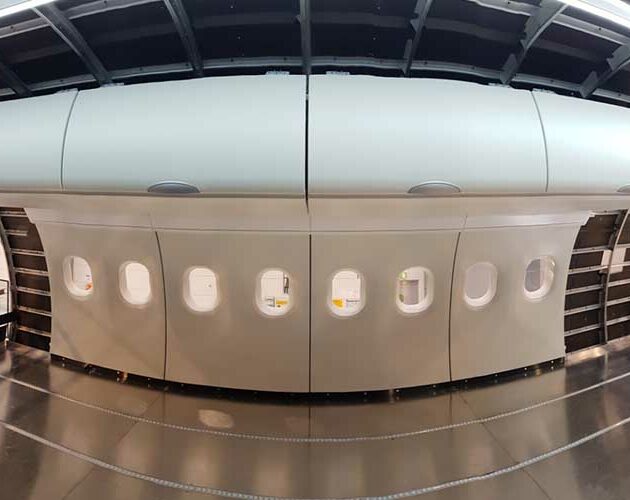 Under the project leadership of Fraunhofer, the participating consortia CALITO, EURECA, SIMFAL and VISTA succeeded in implementing automation solutions for the installation of specially developed lighter components in the project “Automated Cabin & Cargo Lining and Hatrack Installation Method” (“ACCLAIM”). Ergonomically improved working conditions also result from the man-machine collaboration achieved. The automation of installation steps developed in the project and the use of new types of brackets and assembly elements for faster installation of components could in future not only shorten but also reduce the production steps. This would increase efficiency in aircraft production and reduce fuel consumption in flight operations, while simultaneously reducing overall costs.

For the automated installation of the newly developed sidewalls (“Linings”) and hand luggage compartments (“Hatracks”) in the aircraft cabin or cargo area (“Cargo”), Fraunhofer developed in Stade a demonstrator of an aircraft fuselage on a 1:1 scale with associated infrastructure such as transport lift and transport paths. Fraunhofer also coordinated the R&D work of the partner consortia involved in the project. “CALITO” developed lighter components that can reduce the aircraft weight significantly up to 500 kg. Automated installation of the components (“EURECA”) and quality control (“VISTA”) were implemented with automated guided vehicle (AGV) including lightweight robotics equipped with sensors, and virtually monitored (“SIMFAL”).

“The “ACCLAIM” project presented us with the challenge of automating the process steps with the project partners in such a way that both the time required and the complexity of the process were reduced. The linings and hatracks were to be picked up automatically and fed to the cabin and cargo area. To install the components, we then had to maneuver them through narrow areas and precisely position and assemble them”, explains project manager Leander Brieskorn, Fraunhofer Stade.

Deputy project manager Parth Rawal, Fraunhofer Stade adds:
“We achieved this by installing the new lightweight components from CALITO in our specially developed aircraft fuselage demonstrator with EURECA-modified autonomous AGVs and lightweight robots, including intelligent grippers and sensors, in a highly precise manner and assembling them in their respective positions without any gaps, monitored by SIMFAL and tested by VISTA”

1:1 scale aircraft fuselage demonstrator – The automation environment The aircraft fuselage demonstrator developed by Fraunhofer in Stade provides the necessary logistics and installation procedures for the installation of linings and hatracks. It consists of an aircraft fuselage section with a cabin as well as a cargo area and an access platform with transport paths. A lift enables the components to be made available and transported to the respective assembly area by moving the AGV together with the robot and components to the cabin or cargo level. On the sides of the platform corridors leading to the entrances of the cabin or cargo area, there are orientation bars for the visual distance sensors of the AGV. The entire plant is equipped with a WLAN system so that the robots can communicate with the lift or the monitoring system and confirm the request for the lift as well as the individual process sequences.

Weight-saving linings and hatracks for automated, high-precision and quality-assured installation

The CALITO project consortium succeeded in developing lighter and at the same time more stable structures and designs both for sidewalls in the cabin and cargo area as well as for the hand luggage compartments of an A320 series aircraft in the cabin. The components are equipped with automation-compatible brackets that help them to lock automatically onto the appropriately designed counterbrackets of the aircraft structure. The potential use of these innovative components in aircraft interiors results in significant weight savings up to 500 kg. The components still have to undergo various qualification steps at the industrial user.

The AGV unit implemented by the EURECA project consortium, including the robots and grippers, enables autonomous logistics of the components by using guidance sensors. Once at the assembly site, the installation positions for the components are measured via a camera system and the components are installed with the support of the grippers. This not only saves considerable costs in industrial applications requiring qualification, but in particular replaces work that previously required workers to adopt ergonomically critical positions.

The SIMFAL project consortium developed a virtual reality (VR) software that enables rapid planning of the process steps in advance and overall process monitoring during the process. The VR software tracks each step online showing the current process step and the position of the automation unit via a monitoring system.

Finally, the quality control developed by the VISTA project consortium is carried out fully automatically after the components have been installed. A robot unit on an AGV equipped with a camera system is also used here. This automated inspection shows significant potential for savings and additional consistency in evaluation compared to the extensive, repetitive and physically demanding manual measuring steps currently required on assembled components for exact positional alignment and for checking the surface quality.

In addition, ergonomics studies and feasibility studies were carried out by SIMFAL regarding time, cost and weight savings for an efficient use of the developed systems carried out from all project partners. The results were subsequently compared and evaluated with data from a manually performed installation process of the components in Stade.

Besides the possible increase in efficiency due to automation, these evaluations highlight in particular the enormous physical benefit for the workers due to weight savings and optimized ergonomic working conditions due to the assistance of the robots and the VR system, thus a successful human-machine collaboration.

The automation solutions developed for the installation of linings and hatracks must be subjected to further standard qualification steps in terms of material, safety, repeatability, and profitability for industrial application. The R&D results obtained can also be transferred to the automated assembly of components in other industries, such as wind turbine, rail vehicle, commercial vehicle, automotive or shipbuilding, by adapting the pick-up systems.