Cobra International, a manufacturer of advanced composite components for the watersports, automotive, industrial, marine and luxury accessories sectors, will present some of the company’s most recent composite application collaborations and process technology developments at the upcoming JEC Connect 2021 online event. 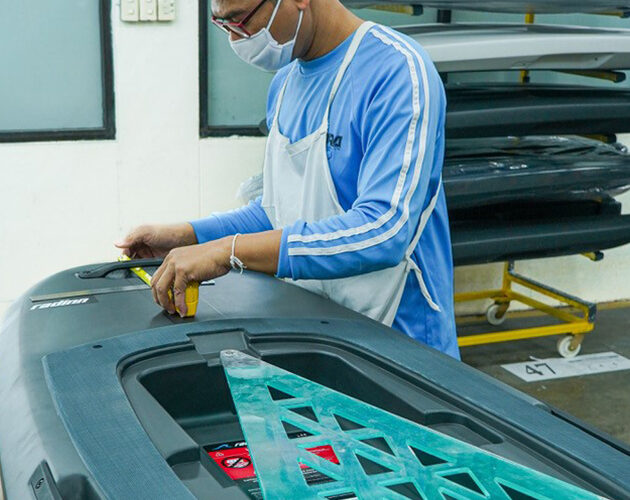 Large-Scale manufacturing platform for Radinn jetboards
Cobra recently announced its collaboration with Radinn to mass produce its new range of electric powered surfboards.  As some of the fastest jetboards on the market, each with market leading battery technology and high-performance water jets, the new Radinn boards provide a truly exhilarating experience.

Using Radinn’s existing board technology, Cobra led the technical development of a new construction process using a lower density EPS foam core and moulded glassfibre skins, as well as providing a large-scale manufacturing platform. The new lighter weight construction, perfected by Cobra over many years, provided weight savings of around 25% whilst maintaining the durability required by riders.

Though Cobra has produced prepreg parts for several decades at its 100,000m2 manufacturing facility, most previous production has been via autoclave or vacuum bag processing. With Cobra’s strategy targeting higher volume applications, a faster production process is required. Developed during the second half of 2020, Cobra’s new compression moulding line is currently producing monolithic carbon fibre wing and mast components for leading foil brands including Phantom Windsurfing and MFC.

Mass production for ARE Tahiti
Also on display will be Cobra’s recent collaboration with leading outrigger canoe brand ARE Tahiti to mass produce its new OC-1 canoe, ‘Mana’. The Mana features a closed deck on which the paddler sits on top of the hull and is available in two models; a hybrid version weighing 12kg and the PRO model – a weight optimized, ultra-light, full carbon version that weighs as little as 9kg.

A precise master model formed the basis of the mass production tooling and two sets of composite hull tooling were taken from this master plug, allowing a build rate of up to 50 OC-1 canoes per month.

The Cobra team will be available on the 1st and 2nd June for video calls throughout the duration of JEC Composites Connect 2021 to discuss all latest developments for watersports, automotive, architectural, industrial and electronics.

The Modern DB: a sports car in a speedbike