The association Composites Australia recently celebrated the careers and achievements of eight women leaders in the Australian composites industry in a special Women in Composites edition of its Connection magazine. 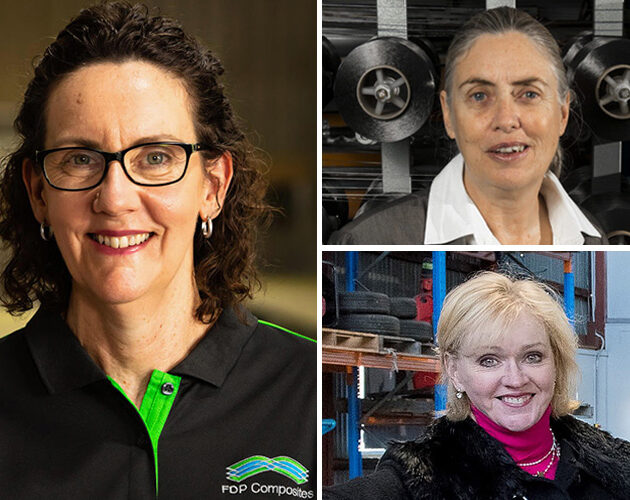 “From its early days in the 1960s, women were barely visible in the composites workforce and certainly not as employers,” says Leona Reif, President of Composites Australia, and Director of FDP Composites. “The work demands grit and determination, skill and passion, and the ability to move with the times. My colleagues . . . demonstrate all these qualities and more, and share a vision of a bright and prosperous future for their own companies and the entire composites sector, and I am proud to be among them.”

Here we present extracts from the interviews with Leona, Genelle Coghlan, a past-President of Composites Australia, and Kerryn Caulfield, the association’s Executive Director.

In 2008, Leona made the pivotal decision to leave her secure job to take over her father’s composite fabricating business along with her brother John. With Leona leading in business development and John at the helm of production and sales, they forged new careers in manufacturing composite components for some of Australia’s largest bus, coach and camper vehicle builders, as well as a range of other industry sectors.

“To have grown the business from a small family company to a national manufacturing enterprise is an achievement which has brought me significant career satisfaction,” Leona admits.

“The sector’s shift to sustainable mobility wasn’t quite on the horizon when I started in FDP Composites, but I am proud that we have the opportunity to make a difference to the environmental performance of public transport,” she says.

Before joining FDP Composites, Leona was expert in management of service operations and business process review within government services.

“With a Bachelor of Arts in Humanities, majoring in Applied Ethics and Politics, I was interested in how the decisions we make have flow on effects, and how examining the effects of those decisions can lead to improved outcomes. Good decision making requires systems thinking – an approach that views the system as a whole, interacting with its environment to meet objectives. Working in government was an opportunity to make a difference in the community. Now in manufacturing, I am applying the same set of skills in systems thinking to continuous improvement. Lean manufacturing is fundamentally an implementation of systems thinking.”

Leona has also applied her governance and management skills to Composites Australia. Her company became a financial member in their first year with FDPC, and Leona and John took a strong interest in the industry and developing relationships with other manufacturers. She was appointed to the Board in 2014 and elected as President in October 2016.

“I see my contribution to the sector as the development of a strong collegiate culture where members of the industry can learn and support each other to grow the industry as a whole.”

Read the complete article on the Composites Australia website.

Genelle Coghlan is a successful serial entrepreneur with many years of business, finance and manufacturing experience in Australia and internationally. After qualifying as a lawyer, she established a successful tourism business overseas, notably in the Maldives archipelago which she called home for decades. Following the sale of this venture in 2004, Genelle returned to Australia to become Managing Director of her family company, Colan Australia. During the 18 years since that time, while offshore competition has forced over 60 Australian textile mills to close their doors, Genelle has managed to turn Colan from a loss-making company into a smaller but profitable venture.

She counts this turnaround feat as her greatest business achievement.

“When I took over Colan, the textile industry had an average rate of government assistance of 26% – in the form of direct budget programs and tariffs. When this support was reduced to 5% and offshore goods flooded in, textile companies like ours simply went to the wall. My strategy was to remain niche and be the first to innovate through fibre properties and fabric construction.”

Colan Australia has specialised in weaving industrial textiles from technical fibres since it was founded in 1954. Close to 70 years later, Colan is still at the forefront of industrial textile manufacturing. The company produces a raft of fabrics for composites and protective and safety applications and is now Australia’s only manufacturer of advanced technical fabrics. It is also the only mill in Australia with carbon fibre weaving capability.

“I came into this company knowing that markets mature, shift and change,” she says. “As a lawyer, I understand that business is a contest – a contest for influence and competition in the form of price, quality, design, sales, location, and almost every business process. For Colan, success has come from remaining niche, and being the first to innovate.”

Genelle is acknowledged as one of the top professional female non-executive directors of Australian listed companies. She is also an active member of the composites industry as a committee member of Composites Australia Inc since 2007 and serving as President between 2010 and 2016.

In her career, Kerryn has not shied from adventure. She has dived into dumpsters to collect data on charitable donation waste, travelled into military zones in the UAE to assess opportunities for Australian manufactured defence apparel, and interviewed surfing legends about the success of Australian brands. She has contributed to countless industry reviews, from Free Trade Agreements to Technology Roadmaps, and held a number of ministerial appointments to advisory and funding committees. Kerryn has managed and headed over 50 offshore missions, 60 conferences and 250 industry technology workshops. She is particularly proud of raising close to $50 million in government grants for industry projects and being involved in committees that raised over $1 billion for the TCF&L sector.

Kerryn has also published prodigiously. In her role at Composites Australia, she has published 59 editions of Connection magazine and written close to 300 articles on composites and other related topics. Kerryn has also researched and written a profusion of white papers on a range of subjects from industry training to international market development for Australian manufactured goods.

Kerryn grew up in the east of Melbourne, where manufacturing firms once gainfully employed thousands of Victorians. After graduating from RMIT, she commenced her professional life developing textile ranges, which took her around the world. She became an expert in fibres and the manufacturing processes and production options for apparel, interior and industrial textiles.

A defining career turn came when she was offered a Victorian Government position as a Senior Trade Counsellor at the Australian Chamber of Manufactures, to assist companies expand beyond the domestic market. The large, vertically integrated textile mill Bradmill Textiles recognised Kerryn’s talents and offered her the position of International Business Manager. During her tenure, the company went on to develop an export portfolio of close to $50 million.

In 1995, Kerryn’s achievements were recognised by the Australian Government Trade Organisation for contributions towards Australia’s export earnings and she was listed in the Who’s Who of Australian Contemporary Women (1998).

Kerryn subsequently founded her own company to specialise in association management across a number of related industry sectors.

Kerryn believes that the success and viability of the local textile and composites industries in the future is linked to innovation, including in technology, products and processes, as well as new business models and frameworks. Most importantly, there needs to be a renewed focus on training and education that ensures the next generation of skilled workers, managers and leaders have the competencies and knowledge to create and capitalise on future business opportunities.