CopenHill: The tallest climbing wall in the world

Discover how the highest climbing wall in the world has been made in Denmark’s capital Copenhagen, offering a total climbing length of the routes of 80 meters. 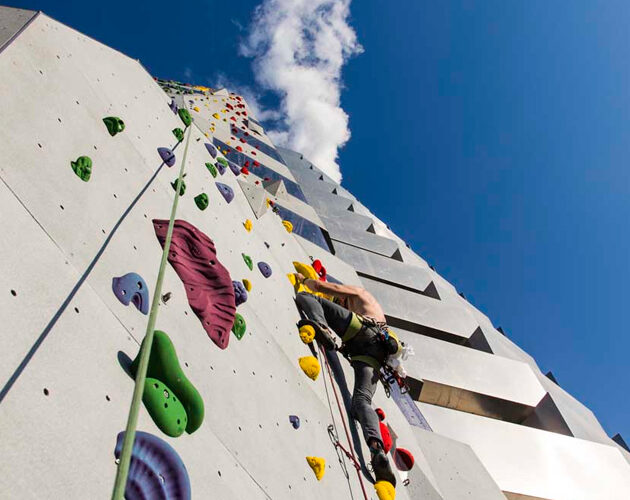 After having opened SKI365, a ski slope on the roof of the waste processing facility CopenHill designed by the architecture firm BIG in Denmark, the Amager Group has now drawn back the curtain on the world’s highest rock-climbing wall delivered by Walltopia, making it possible for mountain sports lovers to train in downtown Copenhagen.

BIG, who won the bid to build the project, has created a facility with an avant-garde, cut-out design. Visible from the centre of the city, this waste-to-energy plant is at the heart of an innovative project whose aim is to incorporate industrial buildings into urban planning, by giving them new functions. In this context, the facility offers inhabitants a way to get exercise in the middle of the urban environment, an initiative that is rethinking the place and role reserved for buildings in urban areas.

Diversifying the functions of a building

Since 2019, on the fringe of its primary function of producing energy, this facility has also embraced a mission to promote sports and exercise in urban environments. BIG had already achieved a first and spectacular step in this project by creating an XXL recreational space the size of the plant’s entire rooftop, which features a dry ski slope accessible to the population. In July 2020, they realized the second step in development, by unveiling the highest rock-climbing wall in the world, at 80m tall, which is integrated into the building’s facade. It’s enough to thrill rock climbing enthusiasts. The wall is reserved for experienced climbers, and the four different routes comprise real physical challenges. But before giving visitors a chance to try out the holds, there were numerous challenges to resolve in terms of design, technical aspects and materials forming.

When construction began on the facility, the Amager group, owner of the building, sent a request for proposals to the biggest rock-climbing wall manufacturers. Walltopia was awarded the consultation and thus committed to building a wall that would comply with the design created by BIG. Moreover, it had to suit the Danish climbing community, all while offering a technical solution that wouldn’t tarnish the overall design of the building. So as to preserve the natural flow of light, Walltopia made the choice of a stainless steel structure covered with plexiglass and fibreglass panels.

The Scandinavian climate is particularly harsh, with extreme temperatures and high winds, not to mention the corrosion caused by the salt air from the Baltic sea. To ensure the sturdiness and longevity of the works, the 1,200 m2 usable surface is composed of fibreglass panels, the most weatherproof rock-climbing wall material available on the market. Practically transparent from the outside, the wall delivered by Walltopia harmonises with the cut-outs in the building facade, to create a climbing route that blends perfectly with the whole.

Vasil Sharlanov, who worked on the design says :
“The wall design was a challenge, as we were striving to find the right balance between appearance and functionality. The goal was to create an appearance that matched the impressive building architecture while designing a wall topology that offers supreme climbing experience”

In all, no less than 55 metric tons of galvanised steel, 24 metric tons of fibreglass and plexiglass were exploited to execute this 80-meter-high wall. To install it, Walltopia used a special platform that acted as an elevator for outdoor construction works, one of many exceptional resources. This is also the first time that fibreglass has been used on this scale for this type of application.

Founded in 1998, Walltopia is present on six continents and exports to destinations in more than 70 countries across the globe. The company brings together more than 600 employees, and places innovation at the heart of its process, in order to offer the widest array possible in terms of materials and climbing surfaces. The company has more than 26,000m2 of production space in its two main facilities combined.

The first one is located in Letnitsa, Bulgaria, and moulds its fibreglass panels per 3D models. Inaugurated in 2010, this unit is staffed by 300 full-time employees and produces 100,000 m2 of plywood panels, 10,000 m2 of fibreglass and 800 metric tonnes of steel.

This article has been published in the JEC Composites Magazine Special Issue featuring Composites for Sports, Health & Leisure.