A ground-breaking new winding machine that uses rotating rings to lay down large volumes of material around a static mandrel is transforming the way long, straight, continuous composite parts can be made. 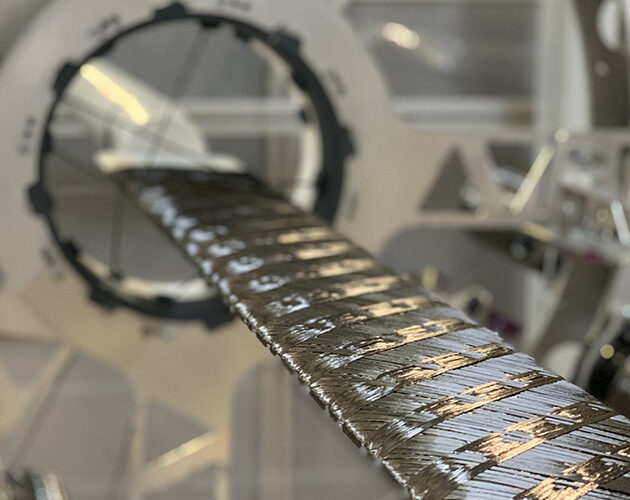 Unlike a conventional filament winding machine where fibres are wound onto a rotating mandrel, the MAW features rail-mounted rotating rings which move back, forth and around a static mandrel, to create the required winding geometry.

Benefits of a static mandrel

The static mandrel offers considerable practical benefits, particularly to manufacturers of large parts that need to be as light as possible.

In the filament winding process, the mandrel required to wind a large part – such as a wing spar – can be awkward to manipulate. It also needs to be made of a material that is robust and of high enough quality to be rotated at speed without being damaged.

Because it is fixed in position, the mandrel used in the MAW can be as large and as light as necessary. It can be made out of inexpensive and fragile materials such as foam or wax, which can be left inside the finished part without adding significant weight.

“If you want to create a 10m-long part on a conventional filament winding machine, you have no option but to build a 10m-long filament winder and incorporate a mandrel capable of rotating without excessive deformation at that length. This makes filament winding on a very large scale unattractive for many manufacturers.

“The MAW on the other hand allows a part of any length to be wound without having to scale up the size of the machine or mandrel itself. The rings pass along and around the axis of the part, winding as they go. At the same time, the part itself may be passed through the process in one continuous motion. This means, for example, a continuous composite pipe could be manufactured, wound and stored as it comes off the winder.”

The speed and volume of production is dependent on the fibre and mandrel profile being used, but even Cygnet Texkimp’s prototype can put down in excess of 1kg/min of carbon fibre onto a mandrel diameter of 500mm with the ring rotating at 60rpm.

“We don’t know of any other winding technology that can put down this volume of material at this speed to produce parts on this scale,” says Whitham.

The more rings that are incorporated into the machine, the more fibre ends or packages can be accommodated and the faster fibre can be laid down.

Multiple rings can rotate in the same or opposite directions. This allows manufacturers to tailor the winding geometry to suit their application by creating multiple layers of differing fibre angles. The resulting quasi–interlaced structure has less crimp than a comparable braided structure whilst retaining the stiffness of a filament wound part.

Cygnet Texkimp has developed the MAW to complement its existing filament winding and automation product streams, in which the company has made considerable investments over the last five years.

“We’ve essentially created a solution that flows from the unwound to the wound and finished part, and that is a major development in the composite part market that simplifies and streamlines the manufacturing process,” explains Whitham.

“When we combine the MAW with our AGV-guided and robot-mounted handling systems, and our packaging and palletising systems, the filament winder becomes part of a complete manufacturing cell which can be used to process the fibre all the way to the finished, packaged and inspected part.”

A production-scale prototype of the MAW is currently being housed at Cygnet Texkimp’s Innovation Centre in Cheshire (UK) where manufacturers and research organisations are being invited to trial the technology in an IP-secure environment.