The National Composites Centre (NCC) with industry guidance from Thales Alenia Space has manufactured an all-composites linerless (Type-V) tank demonstrator that is representative of those used for launch vehicle and satellite propellant tanks, delivering an estimated weight saving of 30% compared to conventional metallic propellant tanks in current use. The NCC has demonstrated this to engage UK interest in the manufacture of composite tanks for space propulsion needs of the future. This showcase project demonstrates how advanced composite technology can play a vital role on future engineered structures in space propulsion. 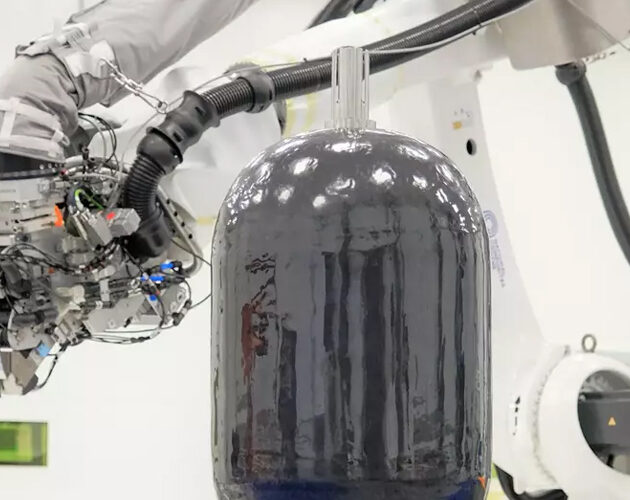 The overall aim for the SpaceTank project was to develop UK-based research and development tools necessary for the manufacture and inspection of cryogenic pressure vessels. In turn, the project would position the NCC to better support the growth of the UK space launcher and satellite propulsion economy. With an industry that is price-driven by launch mass, and where a 1kg reduction in weight can return thousands of pounds to the launcher and satellite manufacturer, the NCC is showcasing how composites can play a critical role in reducing the structural weight of a tank to help realise lower costs for satellite launch.

The one-year SpaceTank project focused on developing a new manufacturing solution for tanks to hold cryogenic propellants. Tanks are important in the space industry for holding the many mission-dependent liquids and gasses, such as liquid hydrogen, liquid oxygen, and RP-1. Making these tanks as lightweight, strong and durable as possible is integral to successful space missions.

The space industry recognises the critical role of composite materials in space, with some companies already exploring their use in space tank design. For example, Virgin Orbit (USA) and RocketLab (New Zealand) have both developed and demonstrated composite tanks as alternatives to metal for their Launcher One and Electron rockets respectively. In Australia, Omni Tanker and partners are seeking to develop and commercialise a composite linerless liquid hydrogen tank, and closer to home in Europe, MT Aerospace, are developing materials and manufacturing methods and undergoing tests for a novel new rocket fuel tank. The NCC SpaceTank project is levelling up the UK as a key player in this field, advancing the UK for design and manufacture of innovative propulsion products that have the potential to revolutionise future rocket fuel and satellite propellant storage.

The NCC SpaceTank demonstrator is 750mm long and has a diameter of 450mm, with a fluid storage capacity of over 96 litres.

This SpaceTank has been designed and manufactured with a nominal wall thickness of 4.0 to 5.5mm, which would allow for the tank to withstand 85 bar of pressured propellant. The carbon composite main body comprises of only 8kg of material mass, but as with all engineered structures, there are further opportunities with SpaceTank to optimise this weight reduction further. The pressure rating of the NCC SpaceTank can be increased with the use of higher strength carbon fibres and by increasing the composite thickness. Alternatively, the SpaceTank could be optimised for weight and cost for much lower pressure applications by using a thinner and lower stiffness composite material.

During the SpaceTank project, the NCC team developed an innovative method for including the metal fluid valve ports to the washable tool, to remove the need for any secondary assembly and bonding operations needed for the final product. These fluid valve ports were held in the novel tooling, enabling them to be co-bonded to the carbon composite during the latter stage of the manufacturing process.

For the carbon composite main body, the NCC used MTC510 epoxy carbon prepreg (supplied by SHD Composites) in 300mm tape width. MTC510 is an epoxy resin system that is specifically designed to cure between 80°C and 120°C and is toughened to increase its damage tolerance.

This material was prepared for the SpaceTank manufacturing process by BINDATEX who performed narrow width precision slitting of the tape and returned 22,000 metres of the material in a 6.35mm format prepared perfectly in accordance with the NCC’s requirement for use in its Coriolis Automated Fibre Placement (AFP) manufacturing cell.

The slit-tape was deposited onto the washable tooling using the tensioned filament winding operation of the Coriolis AFP system. A combination of helical and hoop-winding designed by the NCC engineers using Material’s Cadwind™ filament winding software was used to deposit over 24 layers of the material to a nominal 5.5mm thickness. The thickness and direction/angle of winding used here was for demonstration only; it is possible for the NCC to either increase or decrease this composite wall thickness and alter the winding angle and ply structure to fully optimise the tank for a specific pressure or loading requirement.

Immediately after the material deposition, the NCC SpaceTank was inspected for defects and thickness variation. It was then autoclave cured at 100°C and re-inspected afterwards. Ultrasonic C-Scanning and thermography non-destructive test (NDT) inspection techniques were used after curing, and these methods compared and contrasted for suitability of inspecting future tanks for defects such as delamination and porosity. Finally, after completing the NDT quality assessment, the internal tooling core was washed out with pressurised cool water to leave the inner tank cavity empty.

The tooling technique for the linerless NCC SpaceTank proved to be difficult, which led to the NCC developing a casting process in partnership with AeroConsultants utilising their Aqua water-soluble core material. The finished tool features a centralised male core with a nominal 30mm wall thickness which is cast in two parts and then bonded. The tool has three (washable) internal stiffening rings which were designed and manufactured to help withstand the torsion loading expected during the automated composite layup and the pressure exerted during the autoclave curing.

This demonstration by the National Composite Centre now provides a research foundation in the UK for future propellant tank development, and the NCC is now well positioned to help support a new UK supply chain for state-of-the-art components and equipment for composite tanks manufacturing.

Future research activity in this area this will support the increase of the UK’s 5% share of the global space economy. A report from the UK government in May 2021 showed that the UK’s space industry income increased from £14.8 billion in 2016/17 to £16.4 billion in 2018/19. The summary report for the UK Space Agency also highlighted that more than 3,000 jobs have been created within the UK space sector over last two years (2019-21).

There are a number of companies in the UK which are poised to capitalise on new opportunities for launchers and satellites in a rapidly growing global space economy, this demonstrates the need for immediate research and development in space propulsion technology.

Richard Varvill, Chief Technical Officer at Reaction Engines:
“Lightweight fuel tanks and systems will be an important contributor to future SABRE powered vehicles. Reducing the mass and weight of components is a significant challenge and we are excited about the NCC’s innovative SpaceTank project which has shown the potential benefits of composite propellant tanks for space applications.”

Roger Ward, Chief Technology Officer at Thales Alenia Space:
“Composite tanks are important for us because they have the ability to drastically reduce the cost and weight for future satellite systems. With the NCC helping to increase the performance capabilities of our systems, we can provide the best service possible to the range of governments, institutions and companies who rely on us.”

With the SpaceTank project and a number of other active and future projects in this area, the NCC has now enhanced its capability in optimising the design, manufacturing process and testing for cryogenic and compressed gas vessels, opening up more opportunities to work with customers on end-to-end projects. The NCC is continually engaging new projects with industrial collaborators for future fuel storage tank technology including space propellants and compressed and liquid cryogenic fuel storage across surface transport, aerospace and energy sectors.

Lamborghini enters the world of NFTs with "The Space Key"