The Ecoracer sportboat, built by the innovative startup nlcomp®, was elected Eco-focused Boat of the Year as part of the 2022 Boat Builder Award organized at METS in Amsterdam, an exhibition dedicated to nautical accessories and components. 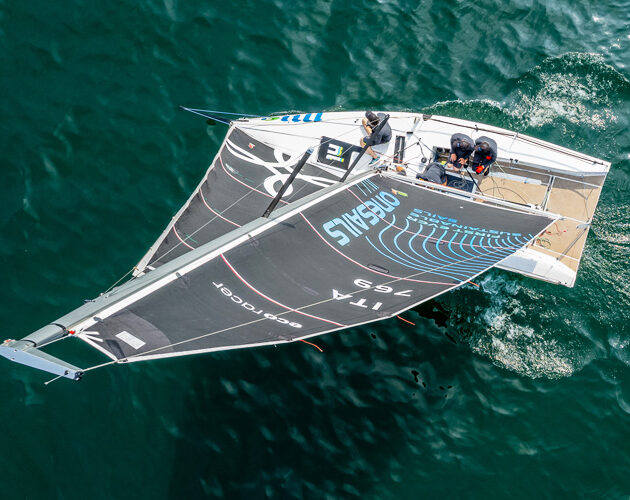 The Jury of the award, for which some big names in the international shipbuilding industry were also competing, defined the Ecoracer as “a racing yacht which is the result of an important development work and intense research activity to make it recyclable”. A recognition that for nlcomp® arrives on one of the most important stages reserved for the industry of the sector and for research applied to it.

Ecoracer is in fact a 25-foot sportboat designed by Matteo Polli and built with nlcomp® rComposite technology, which guarantees the recycling of the boat at the end of its life. rComposite is the innovative composite – patent pending – which nlcomp® has developed to offer the market a concrete solution to the end-of-life problems of fiberglass. The rComposite sandwich is composed of a thermoplastic matrix, natural or recycled fibers and NMG Europe’s Atlas HPE core. The Ecoracer project was supported by NMG Europe for the core materials, Onesails for the sail inventory, Arkema for the resins, Antal for the deck equipment, Armare Ropes for the ropes, Mitek for the electric motorization and by Officine TL Compositi who followed the construction process.

The Ecoracer design team, in addition to Matteo Polli who took care of the water lines, is made up of Fabio Bignolini in the role of project manager, Andrea Paduano who followed the development of the composite, Alessandro Pera and Mattia Sconocchia who are occupied with the structures, as well as by Roberto Baraccani and Alessandro Stagni who oversaw the construction phases. Samuele Nicolettis followed the development of the sails while Roberto Spata the optimization at sea, which led to the victory of the 2022 Italian Sportboat Championship.

Ecoracer was also the protagonist of the sea trials reserved for the 12 journalists of the jury of the European Yacht of the Year which were held in Barcelona in October. The winners of the award will be unveiled next January at the Boot in Düsseldorf, the most important exhibition dedicated to boats.

Nlcomp®, thanks to the equity crowdfunding campaign that is online on the Ecomill.it platform until December 2nd and has already raised over 260,000 euros, will soon announce some news about the launch of a new model, a 30-foot One Design built with the same technology as Ecoracer, alongside which will be born the first regatta circuit in the world made only from recyclable boats.

About Northern Light Composites:
Nlcomp® is an innovative startup that deals with the research and development of recyclable composites in order to solve the problems related to the end of life of glass fiber composites. Born in December 2019, today it has a team made up of the three founders Fabio Bignolini in the role of CEO, Andrea Paduano, Doctor in Materials Science, as research and development manager and Piernicola Paoletti who is the boat manager. In addition to them there are the partners Matteo Polli, world-renowned designer, Samuele Nicolettis, professional sailor and owner of Onesails Nordest and Sergio Caramel, aerospace engineer, who deals with sponsor relations. All the members of the nlcomp® team are sailors and regattas with experience at an Italian and international level, with numerous titles won in the world of offshore and One Design.

Zero-emissions aviation the focus for first Swinburne University’s founder in...