In this Women in Composites interview we meet Eimear O’Carroll, CTO of Irish startup Lios, who co-founded the company at the age of 18. She explains how a desire to reduce noise pollution and noise-induced hearing loss in the world has shaped her career. 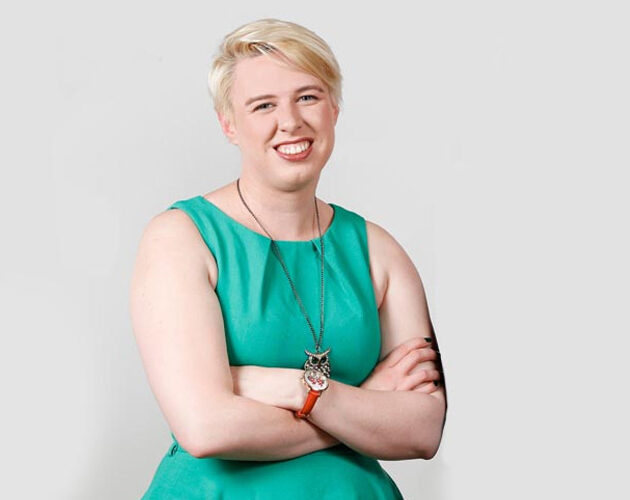 Eimear O’Carroll’s need to understand the world around her was evident even as a child and her home environment fostered this natural curiosity.

“In our house we all loved reading, history and music, so we had a lot of different ways to take in information. Education, and enjoyment of learning, was always a priority. My curiosity about how things work, and how to make them work better, was definitely contributed to by the atmosphere at home.”

Going to university was always an objective, and a growing interest in science led to her decision to study physics.

“Physics seemed like the best foundation for examining really big problems, and how to solve those problems.”

Alongside this, an interest in music led Eimear and school friend Rhona Togher, co-founder and CEO of Lios, to focus on the field of acoustics research.

“I used to play the drums in an indie band and Rhona very diligently attended all of our concerts. I did start to have problems with my hearing. Understanding more about hearing damage − something Rhona experienced as well − was the initial inspiration for what eventually became Lios and the products we created.”

Through high school science projects Eimear and Rhona began to investigate noise-induced hearing damage. In 2009 they entered their project on treating tinnitus in the BT Young Scientist & Technology Exhibition, a competition for students aged 12-19. They achieved second place and spurred on by this success decided to start a business to continue the research. The Local Enterprise Office, which provides support for anyone wanting to start or grow a business in Ireland, was a valuable resource in these initial stages.

“For any business I think it is all about the help you get and getting it when you need it. The LEO were very instrumental in helping us understand what we needed to do. Being really green helped as well. We were just really enthusiastic. We understood the scale of the problem and that if we could help to find solutions it really would improve the world around us. 50% of all hearing damage is actually preventable, which means millions and millions of people don’t need to have the problems they have.”

The friends founded the company before leaving high school, and then both started university.

Eimear joined the University of Edinburgh, where she continued to work part-time on the business whilst also gaining valuable experience through numerous other activities. These included serving as the first female President of the Edinburgh University Water of Life Society (a group dedicated to learning about whisky) and an intern role at Launch.ed, the university’s support service for student entrepreneurs.

“I moved to a new country, I didn’t know anyone, so trying new things, meeting new people, was a big part of what I did to build a community in Scotland. I’ll be the first to admit I didn’t always get the balance of time right. That’s a learning process. I had to figure out what mattered most, and to channel my time there. I’d say that’s a life-long learning process. I am notorious for thinking I can do ever so slightly more than I can.”

Through her involvement in the Water of Life Society Eimear had the opportunity to network with people from around the world, help organise events and secure sponsorship. During her tenure as President there was an increase in female membership.

“When I started in the society it was always really welcoming to women but there was still lower participation from women. In my later years it was closer to 50-50. This experience really highlighted the power of visibility, something I’ve carried through into entrepreneurship and it’s why Rhona and I work to encourage young women into science and business.”

The University of Edinburgh actively supports student entrepreneurs, something she believes may not have been guaranteed elsewhere.

“I was always treated with a willingness and openness to discuss my path and how I wanted to try and do things, which wasn’t always conventional. I was able to study a number of business courses alongside physics, and that was through the flexibility and support of the professors in understanding these two things have always been a part of me.”

When she graduated in 2014 Eimear felt confident to take on the role of Chief Technology Officer (CTO) at Lios.

“By that time, I’d amassed a lot of experience in entrepreneurship as well as completing a Master’s in physics. I think it was those things together, as well as meeting and building communication skills with lots of people from all over the world, that meant I was ready to become a full-time CTO.”

There were three people in in the company at that time. Today, there is a team of around 15 people. Over those years, Lios has collected numerous accolades, including JEC Composites Startup Booster winner 2018, and now it is preparing for the market launch of its technologies.

“We’ve been proving the technology at a prototype scale, understanding the market, and conducting proof of concept and joint development projects with customers in automotive, aerospace, home appliances and construction. They sound like very diverse industries, but they all use the same acoustic materials. Now we’re going from that prototype scale up to pilot scale as we’re getting the specifications together for the first versions of a product on the market. So eventually SoundBounce will be in your car, in your dishwasher, inside the walls of the building.”

Facilitating communication between different groups of people is a key part of the CTO role.

“We have mathematicians, chemists, physicists, engineers, and they don’t all speak the same language sometimes. It’s about trying to facilitate collaboration between them, and then trying to facilitate collaboration between our customers and our team, making sure the lines are joining up between what the customer needs and what we can deliver. The CTO part of it in particular is trying to think where are we going to be next month, next year, in three years? … trying to have that longer term view and making sure all the pieces are in place for that.”

“It’s such a breadth of people that I get to deal with on a daily or weekly basis, there’s no two days the same. And the scale of the problem we’re working on in tackling noise pollution means we are able to make a positive impact through our business, which gives a greater meaning to my role as well.”

We face more scrutiny than our male counterparts

There are still fewer women in technology startups, Eimear notes, but one advantage of this is that women do stand out.

“There is no missing me when I walk into a room of 98 men and I’m the one woman. So if someone wants to talk to me they know where I am! But I also think it’s true of women in every sector, that we face more scrutiny, and are held to higher standards, than our male counterparts and that’s something that does need to change.”

But the situation is improving, slowly but surely, and she is encouraged to see that there’s a greater number of role models now for women in business, and in composites.

“At CAMX last year I was delighted to find the Women in the Composites Industry group. I went to the meet up they had, and it was really stimulating conversation, a lot of similarities of experiences but also diversity of industries and roles.”

And whilst attracting more women into industry is an important first step, she believes supporting women throughout their career so that they can advance and grow into more senior positions is also crucial.

“Even in the startup world, it’s still very rare to see women in the role of CEO or CTO, let alone both of them as is the case with Lios.”

Her recipe for success?

“I always say surround yourself with great people and ask for help when you need it. If you’re trying to tackle big problems in life or business you need support, you need alternative perspectives, you need someone to bounce your ideas off. In my experience people are always really willing to help if you ask. You need to be able to lean on your support network when times are bad, and you need people to celebrate with when things are going well.”

“I’m very fortunate that Rhona and I have a fantastic co-founder relationship. We’ve been friends since we were teenagers, and that’s a very strong source of support that we have for each other and that we can provide to our team. We also have a big network of supporters, mentors, investors, and companies that we work with that we can turn to when we need help. That’s been essential to our success so far and I’m sure it will be essential to succeeding in the future.”