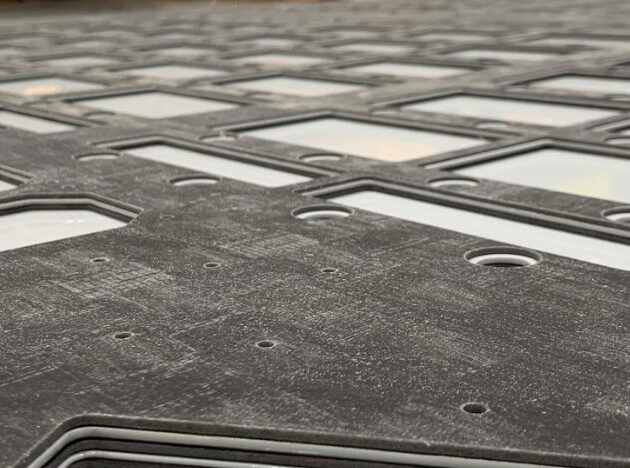 A critical risk of EV fires is damage to the battery, either when something penetrates the cell wall or if it is exposed to extreme heat. An internal short circuit can occur, followed by ‘thermal runaway’ and finally a fire or an explosion. The industry aims to reduce both the probability of fire and its inherent danger in all aspects of EV construction.

The composite/aluminium hybrid base plate, subjected to independent fire tests at Horiba MIRA in line with the standard UNECE Reg100 fire testing, confirmed that thermal insulation is improved in comparison to an all-aluminium baseplate. The test showed the hybrid baseplate not only retarded the heat penetration rate into the structure but resulted in a reduction of 60°C in the internal peak temperature maintaining the integrity of the battery cell module.Contrast this to the aluminium baseplate which resulted in sufficient internal temperature to melt the cell carrier with resultant chemical leakage and a potential live path between the cell and the enclosure.

The fibre metal laminate construction of the baseplate results in a much higher puncture resistance at lower plate thickness enabling the glass fibres to spread the impact load over a wider area to reduce peak stress delivering a stronger, lighter enclosure. Stalcom’s base plate material comprises aluminium and GF-PP joined by a unique bonding system ‘PowderBondPP’ from Powdertech Surface Science. PowderbondPP works synergistically transferring the load between the metal and composite materials to further improve puncture resistance offering greater protection to the battery cells it encloses.