In modern warfare, the stealth technology of fighters, bombers, and unmanned combat aerial vehicles (UCAVs) is an important factor that can determine the outcome of a war by securing air superiority. Stealth refers to a technology that avoids detection from enemy radars and infrared detectors. In the case of detection by infrared (IR) signature, the heat from the aircraft itself, especially the high-temperature engine and rear fuselage, emits the largest amount of heat radiation. This article has been published in the JEC Composites Magazine n°146. 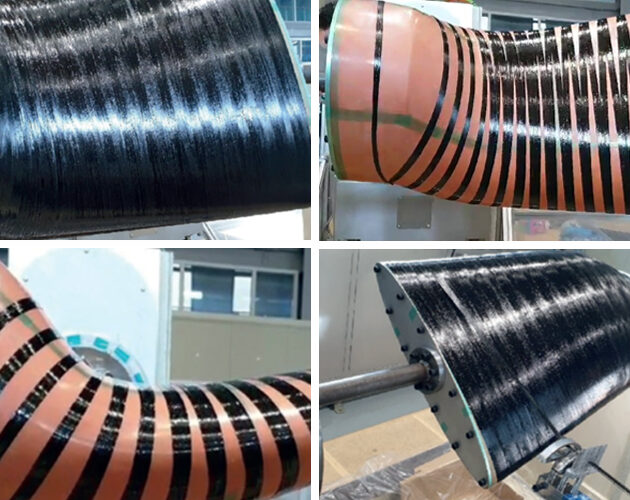 Since it is essential to design an aircraft engine nozzle to achieve IR signature suppression, an S-shaped nozzle (double serpentine nozzle) is applied so that the high temperature part of the engine is not visible. In addition, a large aspect ratio outlet shape is applied to reduce the infrared signature for the exhaust gas plume temperature (Figure 1). Multilayer composite materials are being used to satisfy functional and structural requirements for the manufacture of engine exhaust nozzles.

The inner most layer of the nozzle is made of a carbon fibre reinforced silicon carbide (C-SiC) composite for excellent thermal stability and erosion resistance. And the outermost layer is composed of carbon fibre reinforced plastic (CFRP), a lightweight material to maintain structural strength against axial thrust and internal pressure. Finally, for bonding and insulation, a ceramic material is used between C-SiC and CFRP material.

In this case study, the dry winding process was carried out only with carbon fibre in order to understand the formability of the shape of the engine exhaust nozzle, and the optimal winding pattern and angle setting was required to prevent the fibre slip in the vicinity of the double serpentine
shape in advance. Optimised process conditions for executing a successful filament winding process for non-axisymmetric shapes could be presented
through a commercial filament winding simulation tool (Figure 2).

Cadfil® has several different design strategies for winding non-standard geometries. Because this component is primarily a complex duct (a multi-curved tube of a variable section) a method based on using helical paths generated relative to a curved spine was used. This is analogous to winding a helix relative to the axis of a normal round pipe whose axis is a straight line. A brief summary of the process of creating a winding path in Cadfil follows.

First in CAD the part must be orientated as it would be presented to the winding machine so that the X axis of the part is the mandrel rotation axis. The Second step is to create spine curves to investigate. Figure 2a shows the part geometry and a couple of spine curves. The red curve was the initial design, and the blue curve is a small modification that allowed a slightly greater winding extent at the large diameter end. The mandrel surface geometry is exported from CAD as a triangulated mesh via FEA or 3D print formats. Cadfil supports several standard data formats. The curve geometries were exported as standard STEP data and are fully general composite curves made up of line, arc or complex splines.

The next step is a user dialog to create a set of data parameters for a winding path. The parameters include the surface geometry file, the step file and curve picked, the extent of the spine curve to use (trimming), the initial orientation of the start and importantly the Helical pitch of the winding.

The Pitch is in effect a distance of travel along the spine per rotation of the path around the part. Having created the path, the Cadfil software calculate the friction (anti-slip) requirements of the path so the user can check it is within acceptable limits. A set of paths can be created and combined to make a winding layer and sets of winding layers can be combined to make a complete component winding. Cadfil has a full set of 3D analysis tools available to look at the geometry, thickness and 3D motion of the winder.

The paths created can be exported to CAD, FEM model or used to generate control data for a wide range of CNC or robotic winder.

The ultimate goal of this study is to use highly priced SiC fibre through the winding process to manufacture the exhaust nozzles on the outermost layer
that are exposed to high temperatures.

Therefore, the minimum amount of SiC fibre could be used by setting the bandto-band distance (pitch) to be more than one fibre band width when designing the winding pattern (Figure 2a). To fill the gap between the bands, set the start position of the second circuit to a point shifted by 10mm from the start position of the first circuit (Figure 2b).
It can be seen in Figure 2 c that all the gaps are filled when the circuit is repeated 6 times in total.

As shown in Figure 2d, it was predicted that the fibre would gather at the beginning of the curved part, but a uniform thickness distribution would be formed in other regions.
The collision between the machine and the mandrel during the winding process can be predicted through the 3D graphic viewer (Figure 2 e), and in this case, the machine’s movement was not disturbed by the mandrel.
A relatively inexpensive carbon fibre bundle was used to optimise the winding process conditions.
In the actual process, it was expected that the fibre slip would occur finely along the curved surface.

However, it was confirmed that the position and angle of the fibre band
were accurately wound according to the winding pattern design tool through the adjustment of the fibre tension (Figure 3).

This study confirmed the feasibility of non-axisymmetric aircraft composite
parts that can lower production cost while meeting initial design goals by applying a low-cost winding process compared to other composite manufacturing processes.