West System epoxy is proud to be sponsoring four friends who are aiming to do something extraordinary: to be the first crew to row non-stop from mainland Europe to mainland South America in a pure class boat made with carbon and fibreglass fibre. 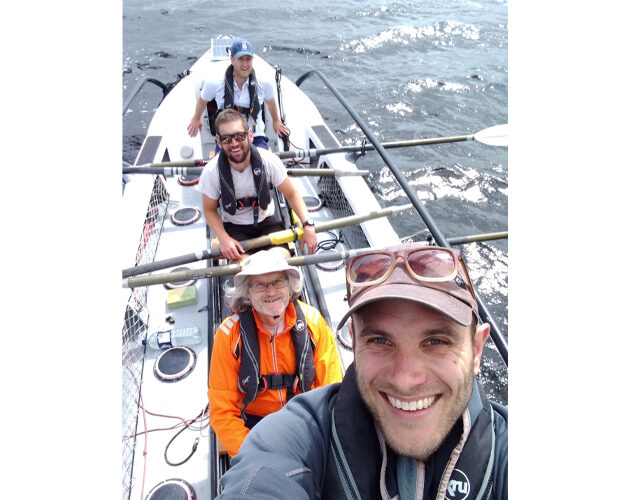 The normal Atlantic challenge starts in the Canary Islands and finishes in the Caribbean. Instead, Jim Davidson, Justin Coleman, Rob Lucas and Tom Riley will be rowing from Portugal to French Guiana, adding another 800 miles onto an already incredibly difficult challenge.

The team are using a carbon fibre and fibreglass boat, Trilogy, which was constructed in 2013, and has already completed three Atlantic crossings.

“Our boat is a pure class rowing boat, so it gains no advantage from the wind,” says Tom Riley. “We would be the first crew to make the journey in such a boat.”

Trilogy holds three rowing positions and a watertight cabin at either end. Power comes from solar panels and is stored in two marine batteries.

“The team at West System was kind enough to provide us with the materials we needed to fix a new rudder and daggerboard,” says Tom.

The new rudder was made with Western Red Cedar and Sapele used for the leading and trailing edges. The daggerboard was made using laminated African hardwood and both were handmade by Michael Riley, Tom’s father and craftsman cabinet maker for over 50 years.

“We let in a strip of unidirectional carbon fibre on both sides of the daggerboard for additional stiffness,” says Tom. “The rudder also has a ‘yoke’ attached on top with joints that needed filleting.”

The rowing team wanted to keep the rudder clear to retain its beautiful design.

Wessex Resins and Adhesives, who the rowing team came to for advice, recommended West System 105 Epoxy Resin with 207 Special Coating Hardener because it is very clear and shows off the grain from the wood.

“We’ll be setting off from the marina of Portimao, on the south coast of Portugal,” says Tom. From there, the crew will push towards the Canary Islands where they’ll have to navigate notoriously unpredictable weather. They’ll then track the African Coast before heading west across the Atlantic Ocean to French Guiana. A route accounting for a staggering 3,800 miles.

The team will be following a routine of a rolling two hours of rowing, followed by two-hour break. During that they’ll be sleeping, eating, confirming navigation and performing any maintenance required on the boat, potentially using West System SIX10 Adhesive, which will be stored away in a locker and used as an emergency repair kit.

“We plan on completing the trip in 60 days and during that time we’ll be entirely self-sufficient. We’ll be taking all our own food and desalinating the water we need for drinking, cleaning and cooking,” says Tom.

The crew will raise money for two charities during this challenge: Surfers Against Sewage and Our Blue Light.

A marine conservation charity, Surfers Against Sewage (sas.org.uk) works with local communities to protect oceans, beaches and marine life. Its primary focus is on plastic pollution but it also works on other issues too, including climate change, water quality and coastal development.