The 2022 NASCAR Camping World Truck Series season will see a new look F-150 in the field as Ford Performance unveiled the 2022 NASCAR F-150 that will compete starting next season. 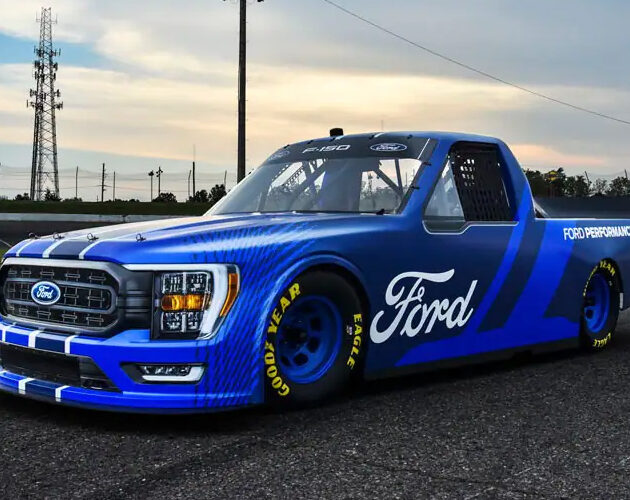 Development of the new truck took place both in Ford’s Dearborn design center and at the Ford Performance Technical Center in Concord, North Carolina, where Ford’s NASCAR scale model and aero teams are located. Extensive development continues on full-motion simulators at the technical center, where both racing and production work takes place.

“We’re proud to be the first to show off our 2022 NASCAR truck today,” said Mark Rushbrook, Global Director, Ford Performance. “The Ford F-150 is the pride of the Ford truck lineup so we’re glad to be able to update the race version to show off the dynamic front end styling that is truly F-150.  We can’t wait for our teams to get on track with it next February in Daytona.”

Changes include an all-new composite nose surface that incorporates design character from the production F-150, as well as newly designed composite hood and tail areas. The hood switches from steel sheet metal to composite for 2022 while the new-look fender will remain sheet metal.

“It is great to have a new look for our NASCAR Truck Series F-150 starting next year,” said Hailie Deegan, driver of the No. 1 F-150 in the NASCAR Camping World Truck Series for David Gilliland Racing. “The aggressive look of the nose and the other styling changes really mirror the production F-150 and in the process has helped improve some areas such as aerodynamics for us on the track starting next season.”

Deegan appears in the reveal video, which also incorporates a pre-production 2022 F-150 Lightning electric pickup. It was filmed at the Ford Motor Company Rouge Electric Vehicle Center and nearby Flat Rock Speedway.

The 2022 NASCAR F-150 makes its competition debut in February 2022 at Daytona International Speedway looking to expand on an already impressive on-track resume. Since its series debut in 1995, F-150 sports 107 all-time race wins and driver’s championships in 2000 with Greg Biffle and 2019 with Matt Crafton