GCRE signs Memorandum of Understanding with The Orange Train Wash

The UK’s Global Centre of Rail Excellence (GCRE) has signed a Memorandum of Understanding (MOU) with revolutionary train wash company, The Orange Train Wash, of which Dura Composites is the manufacturing partner. 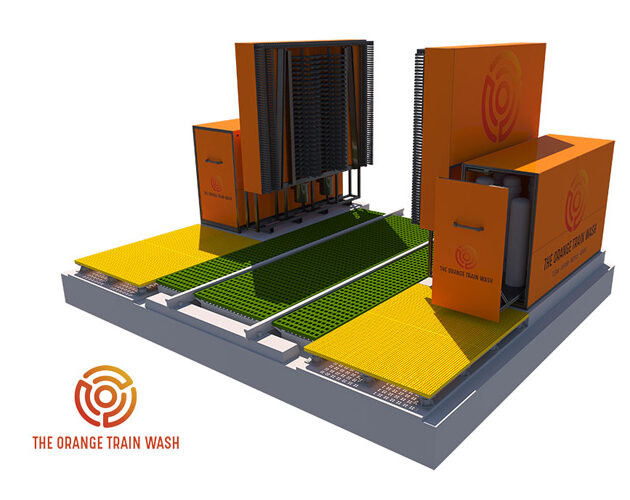 The Orange Train wash is a new product that cleans trains using a unique method that is significantly cheaper than a traditional train wash, and which also offers huge operational and environmental benefits. Unlike a regular, static, train wash, Orange Train Wash is designed to be installed on each road of a sidings, and only requires a three metre by one metre footprint on either side of the train.

The solution cleans a train at speeds of up to five miles per hour, meaning trains can be cleaned in situ, eliminating the time and work involved in taking a train to a location with a train wash facility. It does not require any drainage because almost all of the water is recycled and reused.

Dura Composites supports the Orange Train Wash in its mission to provide the industry with a sustainable and cost-effective way of cleaning trains and has partnered with the company to provide a sustainable substructure and walkway system for the washing solution, as well as funding and assembly operations which will allow The Orange Train Wash to demonstrate its value to train operating companies around the world.

Richard Palmer, Rail Sector Sales Manager at Dura Composites said: “Dura Composites has invested in The Orange Train Wash to become the exclusive manufacturer of the game-changing sustainable and portable train washing system. This alliance will help clients such as train manufacturers and train operating companies access a one-stop shop where we can design, supply and install the enabling Orange Train Wash infrastructure, including the substructure. the safety walkway and the Envirosump which is used to capture the small amount of waste water ready to pump out using existing CET systems.“

The Orange Train wash can be available as both a temporary or permanent solution. With a four day setup and one day removal the system can be installed in a temporary position and moved to a new permanent location when the site permits.

Richard Palmer continued: “Due to the significantly lower costs and working parameters required when compared to traditional methods, we believe this disruptive innovation will vastly improve efficiencies for depot operations by reducing train movements, increase train wash frequency economically and sustainably with a systemised reporting system to show amount of water and energy used and saved.”

The new MOU between the Orange Train Wash and the GCRE will enable the two organisations to collaborate and proactively promote the environmental and commercial benefits of the train washing system developed by The Orange Train Wash. It will be based at GCRE in South Wales.

The GCRE, which was first established by the Welsh Government as a Special Purpose Vehicle (SPV) in 2021, is planning to build a world class rail testing centre. It will aim to fast track improved services for passengers and freight operators, deliver significant efficiencies for the rail industry and the delivery of major projects, and be a key asset in achieving decarbonisation and sustainability targets, among other objectives.

Richard Palmer continued: “We are excited to be a part of this project with GCRE Wales and have a range of innovative and sustainable product solutions which are a perfect fit for this important  world-class centre of excellence. GCRE Wales are a driving force for bringing innovation to market, so this agreement feels like the perfect fit for both ourselves and The Orange Train Wash. We look forward to collaborating with both parties to provide a vital service to train manufacturers, network operators and the wider industry.”

The system from The Orange Train Wash maintains water temperature at 20 degrees before heating it back to 85 degrees for the next approaching train. This means that unlike with conventional train washes, winter conditions won’t disrupt train washing programmes. Featuring easy to use reporting software, the system also provides accurate reports of carbon and water savings.

Kelly Warburton, Chief Commercial Officer for GCRE said: “Train washing has hardly changed in the last 30 years so the solution from The Orange Train Wash really is a game-changer for the rail industry. This MOU is another important step forward for us so we’re pleased to have been able to make the announcement.”

Martin Whitbread of The Orange Train Wash said: “The reality is that traditional train washing solutions are expensive, time consuming and environmentally damaging. Our solution costs significantly less to buy, install and run with almost all water being recycled and reused. Furthermore, it can handle 60 trains a day with a carriage taking just 22 seconds. The partnership with GCRE is a great fit for both organisations and we’re delighted to say that we will be helping to accelerate innovation as part of this exciting new rail technology hub in Wales.”