With a gita mini, you can leave that heavy backpack at home. This smart two-wheeler robot knows exactly how to keep pace with its owner, making carrying your belongings a breeze. 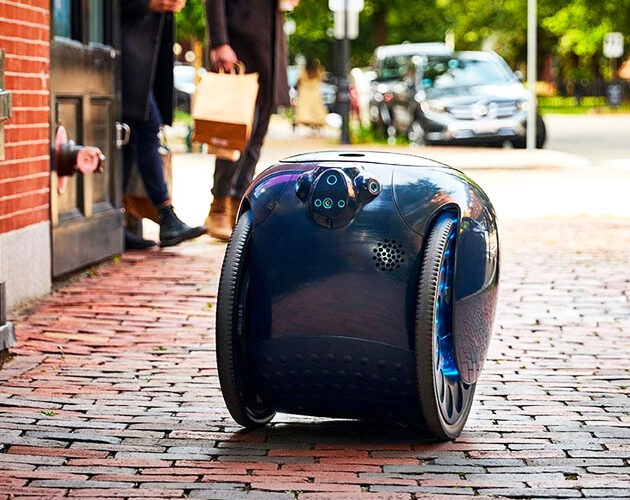 Small, practical, and at­tractive, the gita robot and its most recent alter ego, the gita mini, are two solutions from Piaggio Fast Forward (PFF) that aim to improve everyday life and increase the distance pedestrians can travel on a daily basis. The approach is simple: enable individuals to get around more easily on foot, followed closely by the robot that totes what its owner would typically have to haul.

gita, the robot that frees you up to walk more

gita is a semi-autonomous mobile robot mounted on two wheels. It is battery-powered and able to carry up to a 18kg payload (9kg for the mini version). This deve­lopment project arose from a twofold conclusion. First, when pedestrians travel wit­hin an urban environment, they often need to use their hands to support themselves, open a door, or pass through a turnstile. Then, the weight of the objects carried has an impact on a person’s ability to move, and is a decisive fac­tor when choosing a means of transport.

From these two observa­tions, and with a view to pro­moting walking on short and medium-length commutes in cities instead of driving, the PFF team decided to create gita, a robot with a futuristic toybox appearance and fully equipped for getting around in an urban setting. With its three-dimensional video sensors, the robot is able to recognise obstacles and people in its surroundings, enabling it to dynamically follow its owner while they walk. It is also operational at night, thanks to colour-sen­sing technology. Its various neural networks take in the information in real-time, af­fording the robot an ability to quickly react (stop/dodge obstacles to avoid a collision, for example) all while fee­ding its continuous learning programs to improve ma­noeuvring performance.

How it is made

The gita product line is made from composite materials for several reasons. Composites accelerate project execution by offering considerable free­dom of design, with the pos­sibility of producing parts quickly. They also give the finished product enhanced performance. The gita’s com­posite materials were pro­duced through 3D printing of carbon fibre, and their stiffness and featherweight made the choice a no-brai­ner.

According to architect Greg Lynn, PFF’s chief creative officer, the composite parts were fabricated through a wet layup vacuum process that consolidates unidirectional carbon fibres with an epoxy resin system. The PFF colla­boration with MarkForged, a Boston-based company that has done trailblazing work in composite 3D printing, was a critical factor in selec­ting these materials and pro­cesses.

The company has five or six of the MarkForged 3D prin­ting units. “A few print conti­nuous fibres and the rest print with chopped filament,” says Lynn. The gita has nearly 80 mounts for sensors, panels and ergonomic components like handles, all of which are also 3D printed using carbon fibre reinforcement or car­bon filament reinforcement. He went on to explain that the epoxy resin was really compatible with how those elements were mounted.

Piaggio Fast Forward has also launched gita’s little brother, the gita mini, which is smaller and keeps an even lower profile. In exchange, it transports 9 kg (in compari­son with the 18-kg capacity in the standard version) of cargo, less than half of the larger model. It’s perfect for carrying a picnic, beach gear or groceries. With a dedi­cated app, gita mini owners can also control software updates, open and close the cargo bin lid, check battery status and even keep track of your gita’s mileage.

This article has been published in the JEC Composites Magazine N°143.