GT-R50: A no-limits reimagining of the Nissan GT-R

Nissan and Italdesign have created a new prototype vehicle – the Nissan GT-R50 by Italdesign – in their first-ever collaboration. 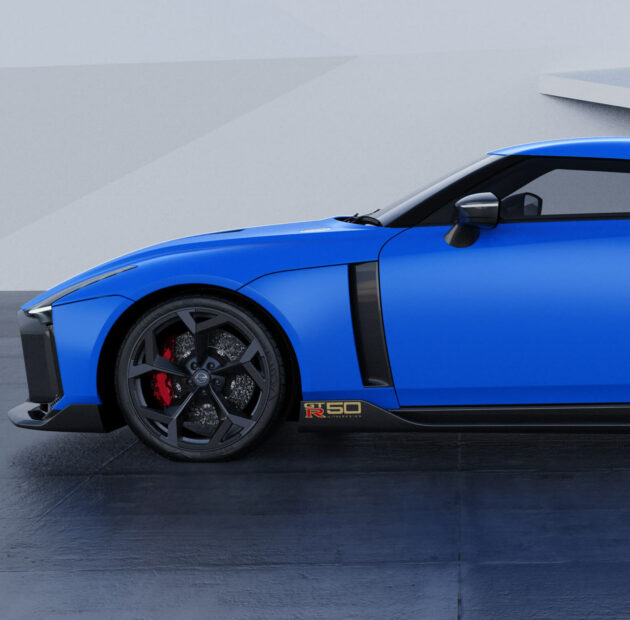 Based on a production 2018 Nissan GT-R NISMO model, the unique car commemorates the 50th anniversaries of both the GT-R and Italdesign and will make its debut in Europe next month.

Italdesign developed, engineered and built the car. The distinctive, crisp exterior and interior designs were created by the teams at Nissan Design Europe in London and Nissan Design America.

Design at its best

Starting at the front, the Nissan GT-R50 by Italdesign features a distinct golden inner element that stretches across almost the full width of the vehicle. The hood has a more pronounced power bulge, and the thin LED headlights stretch from the wheel arch to the lip above the outer cooling intakes.

Dominating the side view, the distinctive roofline has been lowered by 54 millimeters and features a lower center section, while the slightly raised outer portions give the roof profile a muscular look. The signature GT-R “samurai blade” cooling outlets behind the front wheels have gained more prominence with a gold inlay and extends from the bottom of the doors to the shoulder line.

The rear highlights the car’s wide track with taut, muscular flares around the wheels. The shoulder line tapers around the base of the rear window and draws toward the center of the trunk lid. In a dramatic fashion, the rear window line descends longer and deeper than on the standard car. Combined with more gold elements, it appears as a separate modular element of the rear structure.

The GT-R’s twin round taillights have been reimagined as a separate “floating” feature with thin light rings and hollow centers, mounted so as to join the outer buttress and the central portion of the trunk structure. A large, adjustable rear wing, mounted with two uprights, completes the overall look. Custom wheels – 21 x 10 inches in front and 21 x 10.5 inches at the rear – accentuate the car’s bold stance. The exterior is finished in Liquid Kinetic Gray paint with distinctive Energetic Sigma Gold anniversary accents.

Inside, the Nissan GT-R50 by Italdesign reflects its modern, high-performance pedigree. Two different carbon fiber finishes are extensively used across the center console, instrument panel and door linings, along with black Alcantara and fine black Italian leather on the seats. Gold accents echo the exterior treatment across the instrument panel, doors and the futuristic race car-inspired switchgear. The bespoke steering wheel’s central hub and spokes are made of carbon fiber, while the rim features a flat bottom and matching Alcantara trim.

From Microtex Composites research comes a new type of matrix which allows to reach outstanding technical and aesthetical performances. X4-140 is an epoxy “carbon look” resin, one-of-a-kind, when compared to matrices of the same category.

The X4-140 resin has been used for:
> carbon look parts such as the rear diffuser (where the carbon texture is visible)
> the body colour in a combination with the surface film SF 150. It allows to obtain a proper surface finishing where the texture is not visible.

Underneath the new shape, the Nissan GT-R50 by Italdesign is all business. Drawing on Nissan’s GT3 racing experience, the NISMO organization enhanced the hand-assembled 3.8-liter V6 VR38DETT engine to produce an estimated 720ps and 780 Nm of torque.