H2 Racing Truck: a hydrogen racing beast for the Dakar

The H2 Racing Truck® is the first vehicle in Gaussin’s range of zero-emission, 100% hydrogen and electric road trucks. 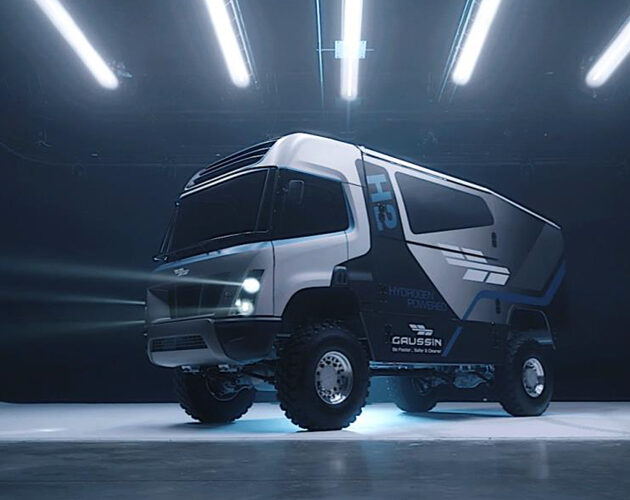 Gaussin, a pioneer in the clean and intelligent transport of goods and people, presents the H2 Racing Truck®, the most powerful 100% hydrogen and electric racing truck ever built. The Gaussin H2 Racing Truck® will compete in the World Rally-Raid Championship with the 2022 Dakar Rally in Saudi Arabia as its first stage.

The H2 Racing Truck® incorporates high-performance design to withstand extreme environments, and it is intended to demonstrate the performance and reliability of the hydrogen-electric motorization developed by GAUSSIN. The data and information collected during the 2022 Dakar Rally will be used to further develop Gaussin’s range of road trucks scheduled for launch from 2022.

“On January 12 in NEOM, Saudi Arabia, the Dakar organization presented its “Dakar Future” energy transition program, which aims to make the Dakar 100% “green” by 2030. The climate outlook announced by scientists is indeed alarming. We are the first generation to feel the effects of climate change and the last generation to act. By entering the first 100% hydrogen and electric truck in the Dakar, Gaussin intends to demonstrate the reliability and performance of its hydrogen road range in a difficult environment. New technologies based on renewable energies are available and mature and should help accelerate the energy transition. For the GAUSSIN Group and its partners, this project, which has now become a reality, represents a technological achievement and the fruit of years of work and experience in zero-emission mobility “, declared Christophe Gaussin, CEO of Gaussin.

“We are delighted that Gaussin, a pioneer and visionary company in the transport market, is taking part in the Dakar Future initiative with a 100% hydrogen truck. By competing in the Dakar, Gaussin is laying the foundation stone for the energy transition we all want to see, and the Dakar is the ideal open-air laboratory for manufacturers”, said Yann Le Moenner, CEO of Amaury Sport Organisation.

The H2 Racing Truck® is the first model in the new range of Gaussin’s zero-emission, 100% hydrogen and electric road trucks that will be launched from 2022. Unlike the solutions currently available on the market, Gaussin’s hydrogen system has been developed for an ultra-light chassis designed around the hydrogen and electric powertrain, based on the modular skateboard launched last April by Gaussin.

Pininfarina Chief Creative Officer, Kevin Rice sums it up perfectly: “We made sure the design faithfully represents the group’s values and roots: reliability, performance and robustness, “Be faster… Safer & Cleaner”. This defines GAUSSIN’s new signature which is shared across all the vehicles in the range”.

“We are thrilled to see the first-born truck running, as a result of the extraordinary collaboration with Gaussin”, affirmed Silvio Pietro Angori, Pininfarina CEO. “We have leveraged our long experience in designing sustainable and intelligent mobility combined with our ability to create unique user experiences to shape the full GAUSSIN range of zero emission road trucks. We are sure that this new range of ecological, smart and unique style trucks will write a new chapter in the history of the zero-emission mobility.”

The H2 Racing Truck® is the most powerful hydrogen truck in the world combining technology, power and robustness designed with high quality components to operate in extreme environments, including: