Hennessey Special Vehicles, the Texas-based hypercar manufacturer, has released details of its Venom F5 Roadster ahead of the new car’s global debut at The Quail, A Motorsports Gathering in Monterey, California. 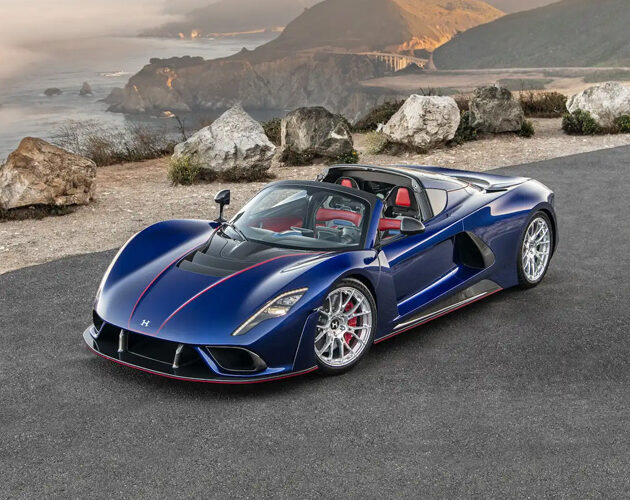 The Venom F5 Roadster is based on the Hennessey Venom F5 Coupe – the two are nearly identical mechanically – yet distinguishing the Venom F5 Roadster from its fixed-roof sibling are several attributes that set the open-air model apart – physically, cosmetically, and emotionally.

Mid-mounted in the carbon-fiber monocoque chassis is Hennessey’s celebrated twin-turbocharged, 6.6-liter, ‘Fury’ V8 engine rated at an astonishing 1,817 bhp. Power is sent to the rear wheels through a robust automated single-clutch gearbox. With a dry weight of under 3,100 pounds, the Venom F5 Roadster promises phenomenal performance… and an engineered top speed exceeding 300 mph.

John Hennessey, company founder, and CEO: “We created the Venom F5 to be the ultimate expression of a hypercar. The Roadster version takes the Coupe’s speed, exhilaration, and awe, plus a sprinkling of respect-inducing fear, to a new, truly visceral level that brings owners closer to the Venom F5’s extreme performance. Our 1,817 bhp ‘Fury’ engine screams behind the exposed cockpit, with its roar unobstructed by a roof – it is an unmatched automotive experience.”

Most conspicuous is the hypercar’s new roofline. In contrast to the F5 Coupe, the F5 Roadster’s roof has been re-engineered with a removable panel crafted from rigid carbon fiber composites. The single-piece roof is fully insulated against the elements and lined with soft Alcantara upholstery. The weatherproof panel is secured with four quick-release bolts and a pair of high-strength latches to withstand the hypercar’s staggering acceleration capabilities and aerodynamic forces at extreme speed. The lightweight roof panel weighs a mere 18 lbs (8 kg), making removal and installation easy for one person.

Owners may choose to store the panel in a bespoke Merino wool travel bag or as a standalone work-of-art on a custom-made, sculptural pedestal – devised by Hennessey’s in-house design team to enhance the ownership experience. The roof pedestal, crafted in carbon fiber like the roof panel, mirrors design themes from the Venom F5 Roadster. Viewed from above, its ‘blade legs’ trace the shape of the car’s rear decklid, while the side profile uses the hypercar’s bodyside air intake form for inspiration. In addition, the sharply angled, streamlined stand displays the ‘Venom F5 Roadster’ script on the front face of the base in the same eight-microns thin aluminum as the car’s ‘H’ nose badge.

The Venom F5 Roadster features a new tempered glass engine viewing window. This panel, in the middle of the rear engine cover, spotlights the massive ‘Fury’ V8 engine in all its glory. Its engineering was no simple task – developed and certified for use in jet aircraft. The sizeable glass panel can withstand aerodynamic forces exceeding 300 mph and temperatures beyond 1,000 degrees Fahrenheit (540 degrees Celsius). The detail is extraordinary – the engine viewing window is encapsulated within a removable carbon fiber engine cover that features intricately-milled heat extraction holes that match those in the rear bumper. Additional heat extraction is achieved by dual aluminum air vents, four on each side of the glass panel, which match the vents behind each front wheel.

The Roadster is further distinguished from its coupe sibling by its unique wheels. Forged from aluminum alloy and then milled to perfection, the lightweight wheels feature seven pairs of spokes, each resembling an elongated Hennessey ‘H’. Milled into the outer face of each wheel rim is the ‘Hennessey’ script, mirrored by the ‘Roadster’ script on the opposite side. Owners may opt to upgrade the Hyper Silver wheels to highly polished aluminum – this exclusive finish requires a painstaking process of hand polishing that takes weeks to complete. The wheels are secured with five titanium nuts, an alloy revered for its strength, heat tolerance, corrosion resistance, and extremely low mass.

Hennessey’s Venom F5 Coupe was engineered from the outset with an open-top version in mind, so only minor adjustments were required to deliver coupe-rivaling chassis rigidity, strength, and stiffness – this ensures that drivers may access the same crisp handling characteristics as the Venom F5 Coupe with or without the roof in place.

As with the Venom F5 Coupe, discerning Roadster buyers may specify any exterior and interior color combination or leave areas of the Venom F5’s carbon fiber chassis and body panels exposed. Opting for either a gloss or satin finish allows the stunning woven composite to be appreciated fully (pre-exposed areas of carbon fiber on the Venom F5 Roadster are standard, as they were on the Coupe). The same minimalist yet high specification of the coupe model is retained within the passenger cabin.

“It’s exciting to see the continued innovation from Hennessey from the test track to the road,” said Steve Reindl, President of Shell Lubricants Americas. “We share a passion for performance, and our co-engineering alliance provides us with an extreme testbed for Pennzoil in some of the fastest road cars.”

The Venom F5 Roadster will be manufactured in Texas in an exclusively low volume of just 30 units (this approach of guaranteeing a unique ownership experience saw the 24-unit Venom F5 Coupe production run sell out shortly after its appearance at Monterey Car Week in 2021). Roadster production begins in late 2022, with validation of the model’s high-speed capabilities set to occur as the production rate levels out.

Hennessey Special Vehicles has priced the new Venom F5 Roadster at $3 million, with each of the 30 personalized examples individually commissioned to its owner.