Hopper® the sport blade accessible to all 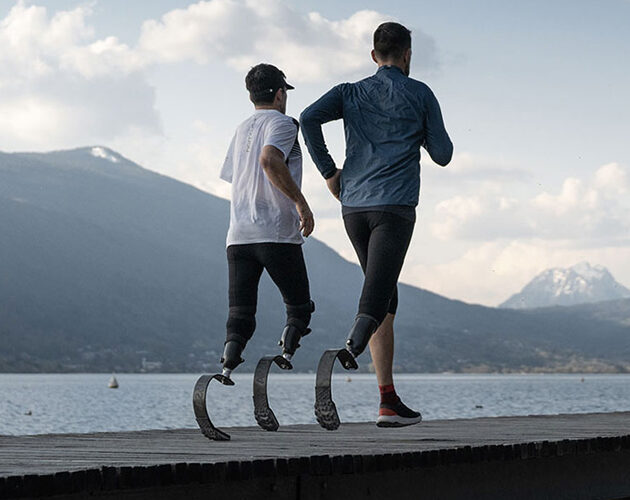 During a discussion at the end of their children’s school day, Jérôme (a polyamputee) and Benjamin (an engineer at Airbus) realized that together they could launch an exciting project. Jérôme’s problem is the following: improving accessibility to sports for people with disabilities. Benjamin launches the project via Airbus Humanity Lab and proposes it to engineering students from IMT Mines Albi. The 6 students from Mines decided to analyze the needs, to carry out workshops with specialists to define a first axis to work on. Running is a complex subject for people with lower limb amputations. The cost of a blade, between 4 000 € and 8000€ , not reimbursed, does not allow people to equip themselves.

The idea that propelled the project: to use the ends of rolls of composite materials used by Airbus, normally discarded, and to shape them into recycled and more accessible prosthesis. The students sized the blade on software and then carried out the prototyping in the school’s laboratory.

The first two prototypes allowed the students to win the jury’s “coup de coeur” award at the Mines’ovactions innovation contest. Proud of this achievement, they decided to continue in their free time to develop adapted and accessible solutions, and gathered various partners to continue developing the project. Airbus, Salomon, EDF, Décathlon, the 3Dx lab of Dassault Systèmes, I-Run and the Occitanie region joined the movement. The technological incubator of IMT Mines Albi and the Clément Ader Institute decided to support them in their approach.

1 year later, the first tests of the blade

On February 13, 2021, the first blade test day took place on their land in Albi, in the south of France. About 15 people were able to test the blade. For the first time since his amputation Hugo could run! An emotional moment that crowns more than a year of work on their free time to develop the product.

The project initially named LISA “Lame innovante sportive accessible” becomes Hopper®. A more global project, federating around strong values. Hopper® comes from “Hopper grass”, a being personifying agility and nature. The student project became a company, founded by the entire initial team, with a common objective: to make sport and mobility accessible to everyone around the world. Their first solution: the accessible racing blade which will be available in spring 2022 in France and Europe.

From 19 to 64 years old, 6 different stories and 6 different profiles took up an incredible challenge. The ascent of a 3000m summit in the Alps, equipped with Hopper sport blades.

From 8 to 68 years old, 20 people were pleased to try our blade. A large amount of smiles and a great satisfaction for the team. Other test days are coming in the next months in France.

The two young directors of the Hopper company, Victor Premaud and Hugo Roche, paid a visit to the Airbus Technocentre at the start of the year. They indicated that the future blades will be produced in Saint Hilaire de Chaléons at Sisco composites in the spring of 2022 from “re-use” material supplied by the Airbus Technocentre.

They will also soon launch the manufacture of a new prototype in re-use carbon from a new 3D printing mold provided free of charge by Airtech.