This is the antenna that will transmit back the first close-up images of the distant Dimorphos asteroid since its orbit was shifted by a collision with NASA’s DART spacecraft. 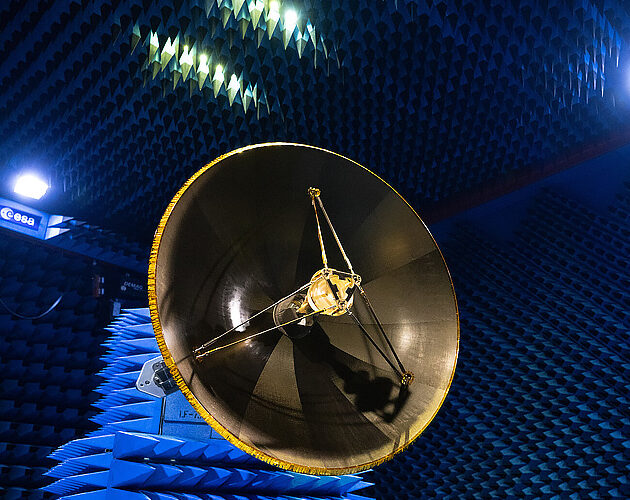 The 1.13-m diameter High Gain Antenna of ESA’s Hera mission went through a week-long test campaign at the Compact Antenna Test Range, part of the Agency’s ESTEC technical centre in the Netherlands.

The CATR’s metal walls isolate external radio signals while its foam-spike-lined interior absorbs radio signals to prevent reflections and reproduce the empty void of space. Each test session took more than 10 hours at a time, with the antenna rotated a degree at a time to build up a 360 degree picture of the antenna’s detailed signal shape.

“The High Gain Antenna is really a crucial part of our mission – it will be our sole means of receiving data and sending commands with the volume we need, with the Low Gain Antenna as backup for low data rate emergency communications” explains Hera antenna engineer Victoria Iza.

Hera system engineer Paolo Concari adds: “Coupled with an innovative deep-space transponder, this antenna will also perform science in its own right. Doppler shifting in its signals due to slight shifts in Hera’s velocity as the spacecraft orbits Dimorphos will be used to derive the mass and shape of the asteroid. But for this radio science experiment to work well, the antenna signal will need to remain stable over time, which means the antenna itself has to maintain its geometrical shape very precisely.”

The High Gain Antenna was manufactured by HPS in Germany and Romania. The company was checking that the antenna’s CATR test performance met mission requirements, comparing the results to simulated radio frequency data.

“The antenna reflector is made of carbon fibre, which makes it very stable and resistant to temperature extremes and general environmental stresses,” comments Fulvio Triberti from HPS. “With a total mass of just 7.5 kg, it is a scaled up version of a smaller model produced for ESA’s Euclid observatory, which will operate 1.5 million km from Earth. But Hera’s antenna will need to cover much greater distances still than Euclid, transmitting and receiving across as far as over 400 million km.”

Located on the exterior of the spacecraft, the High Gain Antenna is especially susceptible to accelerations during launch and the high and low temperatures experienced in space – for added protection against the latter, the antenna will be flown covered in a Kapton-Germanium sunshield that provides thermal isolation while radio waves can still pass through it.

So, as a next step, the antenna will undergo vibration testing at IABG in Germany, to reproduce launch stresses, followed by ‘thermal vacuum’ testing at AAC in Austria, to simulate temperature extremes. Then the antenna will return to the CATR next spring, in order to check that this environmental testing did nothing to degrade its radio-frequency performance.

Antenna engineer Ines Barbary led the CATR test campaign: “The challenge for us has been the very high gain of the antenna, and also its tightly focused directivity – it is a very narrowly focused beam with low side lobes. Our test signals cross less than 2 m from our antenna to the High Gain Antenna within the chamber but our specialist software can transform the signals as if they are travelling across vast distances.”

The High Gain Antenna boosts its signal more than 4000-fold to reach Earth, focused down to only half a degree, so that the entire spacecraft will move in order to line up with its homeworld.

“It’s a fantastic feeling to see flight hardware take shape like this,” concludes Paolo. “And all involved did a great job in making it happen on time, to meet our launch schedule in October 2024.”