The method developed by researchers will lead to a profound shift in recycling technologies which can help the country move towards a circular economy for wind turbine blades. 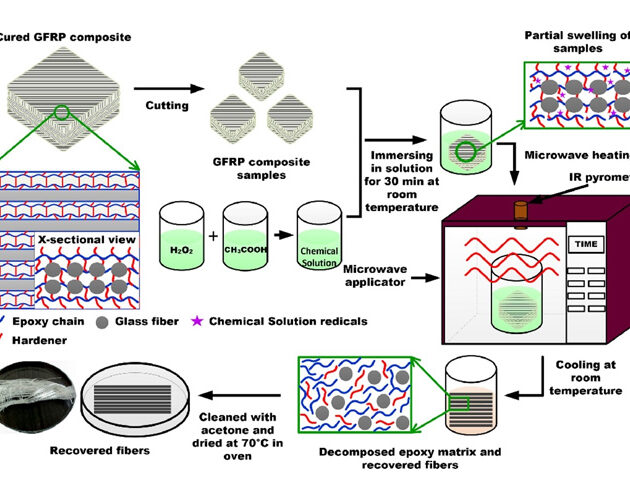 Researchers at the Indian Institute of Technology Mandi have used microwaves to recycle polymer composites to make wind turbine blades. The developed method is rapid, sustainable, and ecofriendly compared to currently used methods like landfills, thermal based recycling, etc.

The findings of the research have been published in the Resources, Conservation and Recycling Journal. The research has been led by Dr. Sunny Zafar, Assistant Professor, School of Mechanical and Materials Engineering along with Dr. Venkata Krishnan, Associate Professor, School of Chemical Sciences, IIT Mandi and coauthored by theirstudents Ms Manjeet Rani and Ms Priyanka Choudhary.

There is a worldwide impetus to adopt renewable sources of energy such as wind energy to overcome the drawbacks of fossil fuel-based energy. India is the fourth largest installer of wind energy systems and as of 31 July 2022, the total installed wind power capacity was 40.893 GW. Wind power is harnessed through the installation of wind turbines (windmills) in strategic areas in the country. The blades of these wind turbines are made of polymer composites that are polymer systems in which fibres such as carbon fibres and glass fibres are incorporated for strength.

Explaining the research, Dr. Sunny Zafar said, “We have developed a sustainable microwave-assisted chemical recycling (MACR) process to recycle glass fibre reinforced polymer (GFRP) composite waste. Also, we used microwaves to aid the chemical degradation of GFRP composites with hydrogen peroxide and acetic acid. Both hydrogen peroxide and acetic acid are ecofriendly chemicals, the former used extensively as a disinfectant/antibiotic and the latter being vinegar.”

At the end of the service life of the wind turbine blades, the de-commissioned structures, composed of glass fibres in epoxy polymers are demolished and either landfilled or incinerated. Both methods of disposal add to environmental pollution and cost. It is predicted that about 200,000 tons of composite waste would be generated by wind turbine blades between 2024 and 2034 all over the world. This negates the environmental benefits offered by wind energy.

Furthermore, restrictions on landfill disposal and fluctuating raw material costs could increase the costs of these composites used in wind turbine blades.

While talking about benefits of the research, Dr Venkata Krishnan said, “The recycling method that we have developed can lead to a profound shift in recycling technologies, which can help the country move towards a circular economy for wind turbine blades.”

IIT Mandi team have developed a rapid and eco-friendly method to recycle the fibres present in the composites used in making wind turbine blades. A particular uniqueness of this work was that no harsh chemicals were used in the extraction, and the green-chemistry approach was used.

The researchers found that the decomposition rate of epoxy in our method was 97.2% with recovery of the glass fibres. The recovered glass fibres were tested, and their properties were compared to those of virgin fibres. The recovered fibres retained nearly 99% of the strength and greater than 90% of other mechanical properties as compared to the virgin fibres.