As a part of the European Union’s DOMMINIO project, IMDEA Materials Institute is helping to create embedded smart sensors which will provide real-time updates on aircraft during flight to engineers on the ground. These sensors, which will be manufactured from carbon nanotubes, will be embedded into key aircraft components via 3D printing during manufacture, resulting in significant cost and time savings for companies. 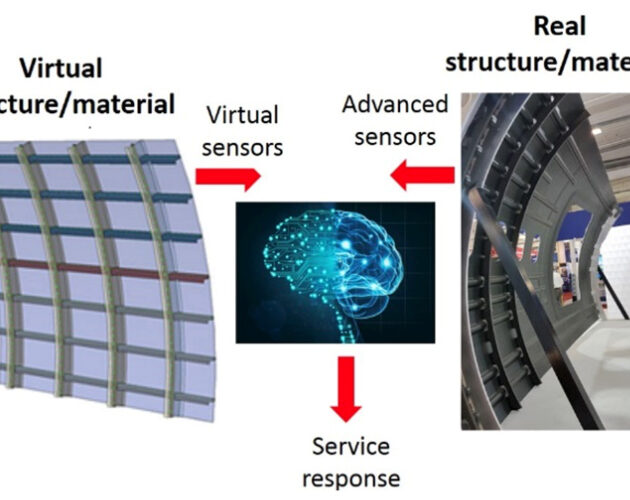 IMDEA Materials Institute is playing a key role in the development of next-generation aircraft sensor technology which will enable real-time monitoring of airframe components in flight.

Such smart sensors, designed to be embedded within the parts themselves, are set to provide enormous benefits in both cost and safety to the airline industry in the coming years.

This, at least, is one of the goals of the European Union-funded Digital Method for Improved Manufacturing of Next-Generation Multifunctional Airframe Parts (DOMMINIO) project.

One of IMDEA Materials’ roles within this international research consortium is in carrying out the advanced simulation and experimental work required to develop the sensor technology, and in the creation of high-fidelity virtual models known as “digital twins”.

“They are called digital twins because they are very accurate digital models that are updated during the whole life cycle, replicating the physical part or component within the aircraft in real-time,” explains IMDEA Materials researcher Moisés Zarzoso.

“Through its embedded sensor, the physical part is able to communicate directly with engineers on the ground. If, for example, you had an impact during flight from hailstones, information relating to any possible damage to the part would be recorded by that sensor and then sent automatically to its digital twin”.

“Using that information, the simulations that we are developing will be able to analyse the risk that a potential impact could induce in the structural integrity of the component, and to determine its remaining lifespan.”

This research is being conducted via the Institute’s Structural Composites group led by Professor Carlos González. The role of simulation and modelling work in the development of such cutting-edge sensors allows researchers to push the boundaries of materials characterisation.

“In order to design the sensor, we have to be able to characterise it,” Zarzoso said. “We can do this through experiments, but also with simulations”.

“With simulations, you can go further in some aspects. You can study the effects of certain design parameters that would either be impossible, or extremely expensive, to test experimentally.”

Crucially, the technology being developed through the DOMMINIO project would not only allow real-time monitoring. It would also implement advanced 3D printing techniques and advances in the production of carbon nanotube (CNT) fibres to embed the sensor within the part during manufacture.

This means they would no longer need to be attached post-production and would also allow for a significant reduction in the amount of electrical cabling required to power the current generation of aircraft sensors.

A combination of lighter and more energy-efficient sensors, along with reduced cabling, will see aircraft become more fuel efficient and thus, more environmentally friendly and cheaper to fly for operators.

Also involved in the DOMMINIO project is IMDEA Materials’ Multifunctional Nanocomposites group, led by Dr. Juan Jose Vilatela, which has taken on the role of developing the CNT sensor and experimental analysis of its piezoresistive properties when embedded in the component.

“The sensors are being designed to be made from these fibres, which are incredibly light compared to existing materials and which also consume very little energy,” explained Zarzoso.

“They are also 3D-printable and, given that they are CNT fibres, they can be easily embedded into a component manufactured from traditional carbon fibre, which is a very common material in aircraft production.”

The benefits of this technology, however, go beyond weight reduction. It will also permit airlines to adopt more efficient and effective maintenance programs.

“Aircraft maintenance is programmed, after a pre-determined amount of flight hours, you have to stop the plane flying to check the various parts and components,” Zarzoso said.

“If you could have a new way of designing and manufacturing these aircraft, that could give you real-time information from sensors about the structural health of the airframe, you could improve the maintenance process”.

“This would result in significant time and cost savings for the airlines while adhering to the demanding safety standards for aircraft”.

The DOMMINIO project is funded by the European Union through the Horizon 2020 research and innovation program.

Along with IMDEA Materials Institute, collaborators in the project include coordinators AIMEN Technological Centre in Galicia, British aerospace giant BAE Systems and Spanish aeronautical firm ACITURRI, the National Technical University of Athens, and the French-based Arts et Métiers Institute of Technology and Industrial Center for Plastics and Composites (IPC).