The Japan Edit is a monthly curation of business news and reports which have a direct impact on the Japanese – and global – composites industry.

A high-performance material that is easy to disinfect

The Japanese company Hide Kasuga 1896, established by Hideyuki Kasuga, the former president of NiKKi Fron, develops and manufactures special resins. Its research base in Nagano City uses a variety of hemp, cotton and silk materials. They will soon start commercializing a high-performance composite material made of synthetic fibres and urethane resin. This new material has high strength and durability, and is easy to wipe off and maintain. The company is developing products using carbon fibre and expects that the demand for easy-to-disinfect materials will increase due to the impact of the new coronavirus infection.

The company commercializes bags, wallets and business card holders made of a flexible material produced by impregnating carbon fibre with urethane resin. It has been gaining recognition as a luxury brand by manufacturing school bags and key chains under the Lexus brand of Toyota Motor Corporation and providing materials to the Japanese subsidiary of German camera maker Leica. However, according to President Kasuga, “Carbon is too expensive in terms of function and price to expand its use, and the problem was that there was only one black colour.”
The company thus focused on existing fibres. NiKKi Fron has its roots as hemp wholesalers, and Nagano Prefecture has a history of prospering with raw silk. Hemp and silk can provide materials in various colours, textures, and price ranges while creating a connection with the local community. The company has been conducting research for about a year, anticipating applications such as bags, sofas, wristwatch bands, and exterior parts for robots used in medical and nursing care settings.
The new composite material enhances strength and durability while making the best use of hemp’s texture, and the urethane-coated surface can be repeatedly disinfected with alcohol. President Kasuga explained, “The new Coronavirus crisis has created a demand for constantly disinfecting surrounding objects.” In addition to commercializing bags and other products in-house, they plan to supply them as industrial materials to various manufacturers.
An exhibition will be held from October at the Gallery de Kasuga commercial facility in Tokyo. In collaboration with Fujifilm (Tokyo), bags, chairs and cameras using new materials for the exterior will be exhibited. Hide Kasuga wishes to develop more sophisticated materials in collaboration with the Faculty of Textile Science and Technology. For this reason, it opened a joint research base with universities and companies inside the Faculty.

Developing a dye for polypropylene fibres 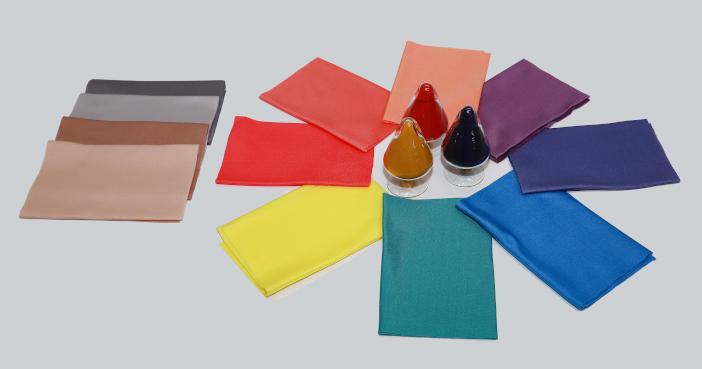 Kanazawa Institute of Technology, the University of Fukui, and Arimoto Chemical announced that they have succeeded in dyeing polypropylene (PP) fibre, which was difficult due to the complexity of the fibre structure. A patent was filed for this development. They introduced a technology to dye in the air, where carbon dioxide at high temperature and high pressure spreads without using water.
Starting with the results of this research, the new technology is expected to develop in fields such as the apparel industry and sports clothing, where PP fibres have not been used much so far.
PP fibre is one of the four major general-purpose resins along with polyethylene, polyvinyl chloride, and polyethylene. It is the lightest of all chemical fibres, has excellent quick-drying and heat-retaining properties, and has the advantage of being inexpensive as the main raw material. It is used not only in clothing such as underwear, but also in a wide range of fields such as food packaging films, bedding, and home appliances.
PP fibres have a dense structure and, unlike existing fibres, they have no functional groups associated with dyeing, so dyeing is difficult with a general technique using a large amount of water. Another method uses a pigment insoluble in water, but it is limited to thick PP fibres and the number of colours is also limited, so it was not suitable to dye clothing.
Therefore, the research group introduced a quinone-based atom that has a high affinity for PP fibres and built a mechanism that makes it easy to dye PP fibres. Furthermore, carbon dioxide was used in a pressure cooker as a supercritical fluid at a temperature of 120°C and 250 atm, and red and blue were obtained as new dyes.
Traditionally, dyeing has been using water as a medium, but this involves many problems such as waste liquid treatment and a large energy consumption. To solve these problems, a dyeing method using carbon dioxide in a supercritical state was developed in Germany in 1991. This method has practical advantages such as the absence of waste liquid, environmental friendliness, and the ability to recover excess dye. It has been put into practical use since 1996, led by the University of Fukui.
Supercritical dyeing is a process in which the dye dissolves in carbon dioxide in the supercritical state, then it adheres to the surface of the fibre to be dyed and spreads into the fibre. The carbon dioxide is dissolved in the fibre after dyeing. The same method was used in this research, and the results showed that the colour did not fade easily even after washing.
With this research, the three primary colours red, blue, and yellow were prepared. In the future, the company plans to sell seven types of dyes, including purple and green, aiming to expand the application field of polypropylene. 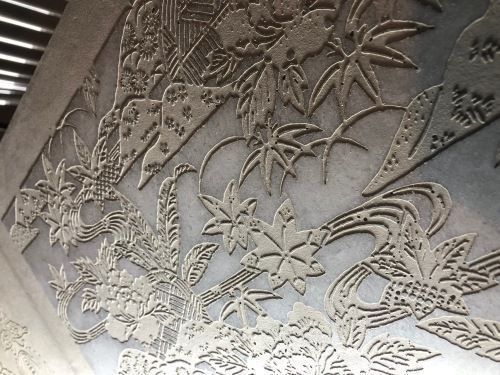 Hybrid Prestressed Concrete (HPC) is a material that has begun to spread from Okinawa.
The project “Una-“, which creates a stage space using the roof tiles of Shurijo Castle that burnt down last year, started in August. The project is an effort to transform the damaged roof tiles into HPC (Hybrid Prestressed Concrete) panels that combine low thickness and strength. After completion, the panels will be used to create a high-quality space such as the stage set up in the garden where traditional Ryukyu performing arts entertained envoys during the Ryukyu Kingdom era. The project was reviewed by the prefecture and approved as an idea to utilize damaged roof tiles.
The project was devised by Professor Yamauchi of the Faculty of Music at the Okinawa Prefectural University of Arts. The executive committee that runs the project, organized by the Ryukyu Traditional Performing Arts Design Lab, is made up of Professor Yamauchi as the representative director, HPC Okinawa, which developed the Hybrid Prestressed Concrete, Giken, which manufactures the product, Ryukyu Bingata, and Okicom, a member company of the Ryukyu Bingata Expansion Consortium.
HPC is an innovative concrete that uses carbon fibre and other materials to achieve both low thickness and strength. It is highly airtight and suitable for surface modelling. The “Una-” panel is a combination of four HPC panels weighing about 80 kilograms, and is planned to have a Ryukyu Bingata design. The panel is named “Una-” as an artwork. Una- will be used as a “stage” where Ryukyu musicians will sit down and play classical music, which is expected to create a space where tradition and innovation are fused.
Masaki Ahagon, CEO of HPC Okinawa, said that the panel will be produced at the Giken factory in Nanjo City. 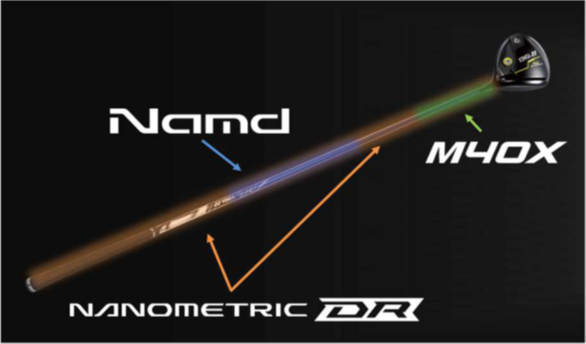 The Yonex company started accepting custom orders for the Rexis Kaiza-Mass golf shaft at the end of September 2020. This product combines three types of advanced carbon materials: Namd, M40X, and Nanometric DR. Due to the softness and flex achieved, this combination allows a more stable swing and trajectory.

Namd is a technology developed by Nitta Corporation to produce composites with carbon nanotubes nano-dispersed uniformly into carbon fibres. It improves the interfacial adhesion between the carbon fibres and the shaft resin. The large bending back and restoring force result in an increased head speed, and a comfortable shot feeling extends the flight distance.

M40X is a next-generation carbon fibre developed by Toray Industries that combines high strength and a high elastic modulus. It offers both strength and elasticity, and repels the ball strongly. It is compounded at the tip of the shaft.

Nanometric is a material developed based on Toray Industries’ Nanoalloy technology. It is tenacious and has a greater resilience and impact strength than general carbon. It brings stability to the entire shaft.

This new type of shaft contributes to an increased flight distance by improving stability and meet rate through the synergistic effect of the three types of advanced carbon.