Hyundai Heavy Industries Group (HHI Group) speeds up the era of eco-friendly ships by launching a demonstration project to apply fuel cells, which are in the spotlight as a next-generation energy source, to large vessels. 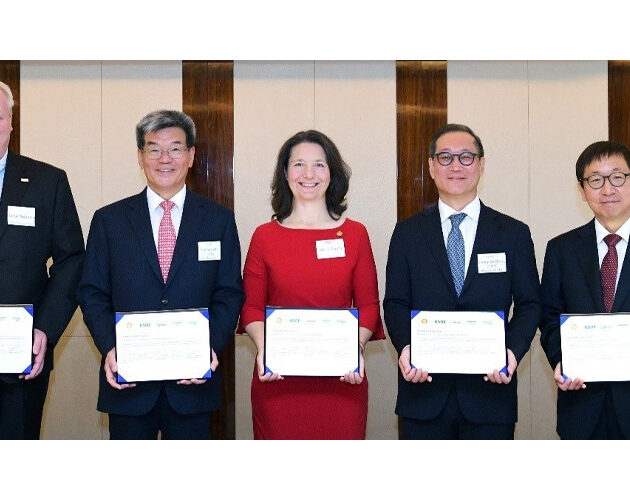 According to the agreement, HHI Group will use a 600KW high-efficiency Solid Oxide Fuel Cell (SOFC) for power generation on a 174,000 cubic-meter LNG carrier to be run by Shell from 2025. Based on this, it will develop and supply high-efficiency, eco-friendly ships that can apply fuel cells to propulsion power sources in the long term.

This LNG carrier will use fuel cells as an auxiliary power unit (APU) and perform its demonstration for one year on the actual trade route.

Based on the expertise in shipbuilding for over 50 years, HHI Group will build a ship, design and install SOFC placements, and integrate the ship system.

Shell will be in charge of managing and operating the ship, as well as managing the demonstration project, while Doosan Fuel Cell and HyAxiom will develop and supply fuel cells for the ship. DNV will conduct inspections of the structure and equipment of the demonstration ship for accreditation registration.

The International Maritime Organization (IMO) has announced environmental regulations aimed at reducing greenhouse gas emissions by 50 percent from that of 2008 by 2050 to reduce greenhouse gas emissions in the shipping industry. Accordingly, next-generation ships that apply high-efficiency fuel innovation systems, such as fuel cells, along with eco-friendly energy sources, such as LNG, hydrogen, and ammonia, have been drawing significant attention.

Karrie Trauth, SVP of Shipping & Maritime at Shell, said “This consortium and the cutting-edge technology we’re pioneering could help deliver less carbon-intensive operations in the near term while unlocking a pathway to net-zero through the blending of conventional and alternative fuels until zero-carbon options are available at scale. We’re excited to be collaborating with some of the leading names in shipping who share a vision of a zero-emission industry and are working hard to progress shipping decarbonization.”

In addition to this agreement, HHI Group is developing its own SOFC technologies to promote fuel cell development projects.