Kanvaslight is revolutionizing the lighting sector while co-cure has transformed the materials sector. The combination of the two promises a new solution, LamLight, breaking the mold with a new concept for lighting. It is now possible to illuminate locations that have never been explored. 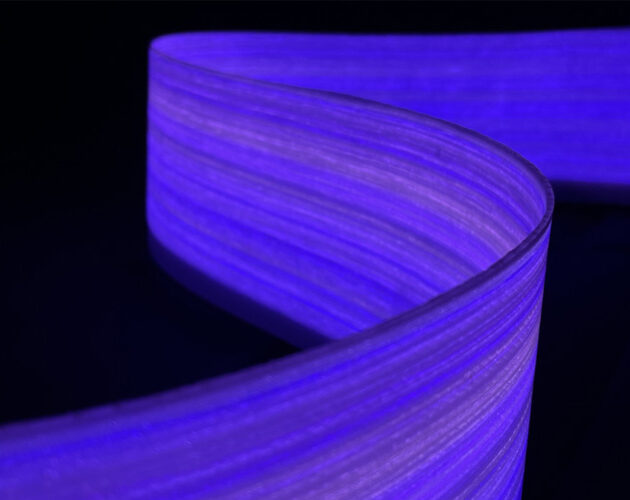 LamLight is a two-component system built with an electronic (Light Injector) and a lighting composite (Schematic 1). LamLight uses the phenomenon of light transportation with Kanvaslight illuminating fabrics laminated with co-cure resin. With the fiber optics laminated throughout the composite, electricity does not flow in the composite, making LamLight the ideal lighting solution in terms of safety. Once the electronic is plugged into a power source, the light injector shines a powerful magnified light through a patented optical coupler, the light can then be diffused into the various optical fibers of the composite. The fiber optics are treated to allow light to leak out, creating a very uniform and smooth lighting effect.

We quite often use the analogy to a pipe of water. Imagine that water is going into a pipe from point A to point B. If you create small holes along the pipe, water will leak along the way reducing the volume reaching point B. With Kanvaslight, the company use the same principle with fiber optics. Normally, it is impossible to see light going along the fiber optics, only at the two ends. The fiber optics are treated to create “micro holes” along them in order to “release” 80% of the light injected on the length, only 20% is remaining at the end of the fibers. With LamLight, 80% of the light used is released to create lighting surfaces (Picture 1).

Since the inception of LamLight, new uses for the product have emerged. LamLight can illuminate more than just a logo or a graphic design; its multi-faceted application will bring your branding and message to life. Users also have the choice of RGBW colors that they can control by way of a smartphone, tablet and more.

LamLight can seamlessly integrate into a structure, without altering its mechanical properties unlike other light-emitting solutions. This allows it to be used in various industries such as marine, pools, aeronautics, and more.

Kanvaslight is a technology created by Guardtex in 2017. Initially integrated into boat bimini tops, Kanvaslight lighting fabrics quickly evolved into other applications, the latest being composite integration. Using woven optical fibers and LED lights, UL approved and CE certified Kanvaslight can be safely used in a wide range of applications, including sun shades, flooring and seating. No electricity flows through the fabric, making it a safe and versatile solution. The patented technology allows the use of textile structures to create broad lighting surfaces producing perfectly diffused light (Picture 2). Designed to withstand extreme conditions on the water, the integrated lighting creates a clean-line installation that is visible only when illuminated.

Understanding marine challenges, Guardtex was able to centralize all the light injectors (electronics) in one area using optical wires (Schematic 2). The company developed these wires to transport the light between the light injector and the composite with minimum light losses to integrate the electronic device further away from the illuminating composite. No electricity flows into the optical wires, only light.

Co-cure is a resin that is a hybrid of a flexible polyurethane network and a UPR rigid cured network. Co-cure is highly compatible with Kanvaslight illuminating fabric as a resin, making the LamLight composite. Co-cure provides the best light transmission ratio while keeping the composite flexible and resistant. More than just being able to transform composites into lighting surfaces, Co-cure also allows a boat manufacturer to reduce the boat’s weight while improving its mechanical performances. It can double the life expectancy of composite structures. Co-cure has been selected by the U.S. Navy for their advanced combat crafts. Co-cure allows a 90% improvement for gloss and glass retention, 40% improvement on abrasion resistance, and 100% improvement in impact resistance.

LamLight is a revolutionary technology for boating, pushing the limits of design even further. Designers and engineers can thus imagine illuminating shells, illuminated floors, showers, interactive spas… LamLight goes much further still by offering all composite structures a new lighting function. Functional or aesthetic, it is possible to respond to new problems in complex environments such as explosive areas. Generating neither heat nor electric current, it is possible to integrate LamLight into a fuel tank to inspect it in complete safety. LamLight simplifies interior lighting by making structural parts a source of light.

And why not imagine lighter and more economical space stations by transforming the walls into sources of ambient light?

Born from a great collaboration

Guardtex is a high-tech textile solutions company based out of France with an American office in Tampa, Florida. Guardtex has been in the marine industry for over a decade and has made great strides in that industry due to their innovative ways of thinking, a prime example being the revolutionary Kanvaslight, the Illuminating Fabric. With Kanvaslight, Guardtex has been able to break out of the marine industry and enter many others such as RV, Outdoor, aerospace, interior design, and now including the space of composites with their partnership with Structural Composites Inc to create LamLight.

After receiving an IBEX Innovation Award for co-cure (2018) and one for Kanvaslight (2021), Guardtex and SCI decided to collaborate in order to combine their two technologies. Already in the idea of creating a luminous composite, Guardetx and SCI carried out a series of tests, by varying the parameters of the technology. One year later, Lamlight is officially made public with a first award at CAMX 2022 for “the most creative design”.