Located two steps away from the emblematic CNIT building in the Parisian business district of La Défense, the Latitude will welcome its new occupants at the beginning of 2022, after three years of works. Significant restructuring and a thirty-two-metre extension have been added to the 70s-era Berkeley building. 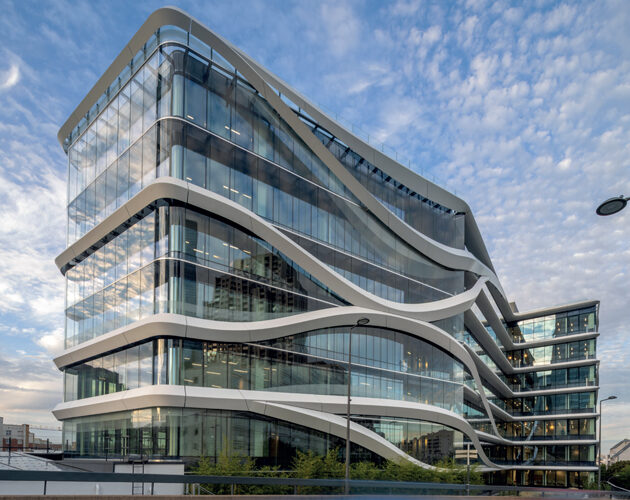 To create a distinct silhouette and stand out from the mineral, vertical landscape of La Défense, Studios Architecture imagined “flowing, curvy horizontal signature”, whose waves of ribbons would envelope the building. This audacious 1,500 square metres of articulation were produced entirely from composite materials, through close collaboration between Bouygues Bâtiment Ile-de-France Rénovation Privée, Meca, the engineering and design office, and materials supplier Sika Industrie. The technical barriers were lifted one by one, without compromise to quality or aesthetic.

The shift from an architectural project to a technical solution

Just a glance at the project overview suffices to grasp the challenged that the ribbon-shaped articulations represent in the architects’ vision. And after looking more carefully, the Bouygues Rénovation Privée team that was awarded the contract in August 2018 realised that the ribbons vary in form and that each one was different.

Their thoughts went immediately to the choice of material. The tendering documents mentioned a design principle involving thermoforming and an internal metallic structure. This route would not turn out to be compatible with the technique chosen to execute the facade. To rise to the challenge of fulfilment, a quest for an alternative began.

While conducting research on the materials used for racing boat models and tooling, Hakim Bouhouita, construction manager for Bouygues, contacted David Angeli from Sika Industrie. Sika their composites expertise, materials, and rolodex of potential subcontractors to the project.

The use of machinable PU foam boards seemed appropriate. After a visit to the Sika technical lab, Labelite foam boards in various densities, glued and anchored with Sika Biresin F180-1 fastcast polyurethane resin were an obvious choice. The boards would be machined in 3D to create unique pieces, and coated with epoxy resin SikaBiresin CR82 and glass fibre to bring together their properties of resistance and light weight.

It remained to be seen whether all the stakeholders in the project (architects, technical design office for the facade, and customer) would be convinced that the composite material solution was a viable one.

In November 2018, Bouygues Rénovation Privée consulted Meca, which already had a few engineering studies of covering elements or composite material facades under its belt. This new project represented a substantial challenge, as a technical solution had to be developed starting from the ground up in a very short timeframe. Challenge accepted: at the end of December 2018, the first prototype showing the appearance was assembled and approved.

At the beginning of 2019, studies for the facade had already begun, and many technical details had to be provided to the facade builder, Goyer. Adaptations were made to the glass fibre reinforcements to suit the constraints of the construction site. Four levels of reinforcement were defined to cover every part. Two 200g/m2 chopped glass strand lengths of fabric would be sufficient for the parts subject to less strain, while the longer ribbons that stretched to 10 metres high with and a span of 7.5 metres would be produced from four 1,200 g/m2 quadriaxial pieces of fabric. Elements made from CTBX Marine plasterboard would be interspersed prior to machining.

These would support the transition between foam and metallic connectors and provide the stiffness necessary to fasten the ribbons. Samuel Durand at Meca performed the calculations for components and fasteners. As a member of the CEN TC250/WG4 in charge of the Eurocode Composite (TS19101) project, validation can be completed according to the future European regulation even before it is officially published.

The articulations were modelled entirely in 3D. In order to avoid aggregation/synthesis of work packages in 2D, as is still the case in spite of advances made in BIM, the facade engineer adapted the design tools used and also integrated the latest components in 3D.

Use of composites validated by ATEx

The Eurocode composite was not yet published at this stage of the project. This meant that the use of composite materials-based structures was still considered an uncommon building technique and not covered by a harmonised standard, nor was it compliant with any European technical assessment, as required by the CPR. An ATEx procedure therefore had to be undertaken, so that the facade treatment could be insured.

Assessments were performed by both the inspection bureau Socotec, and CSTB, on the basis of a qualification programme involving studies and tests for which the engineering and design office Meca prepared the specifications. This programme highlighted two critical parameters: durability and manufacturing quality.

It provided for conducting accelerated ageing tests (1000 hours) on the stratified materials, sandwich areas and the fasteners in representative conditions for thermal shock, rain, and saturation in humidity. The goal was to validate the compatibility of materials and a low impact of ageing on their strength and resistance. Fatigue testing was also performed to validate the component and fastener vibration behaviour in wind.

All mechanical testing was performed in the Sika Industrie laboratory, with the support of Thomas Delhaye, which allowed the time necessary for making a decision regarding procedure to be reduced considerably.
Factory-manufacturing of facade treatments.

Once the laboratory tests were validated, all that remained to be secured for the project was composite parts manufacturing. Quality control and materials traceability were simplified by the fact that Sika supplied all materials for the ribbons. The project partners then organised the technology transfer to the manufacturers, Le Prince Borel and SMM Technologies.

Patrick Noirclerc from SIKA Industrie guided implementation of the resin infusion technique retained to manufacture the dressings for the public hallways and passageways (112 elements, 32 different moulds).
Some details were also finalised, like the angles of the ribbons, refilled before machining so that they wouldn’t become blunt during transport and installation.

A specific quality programme was established for the project, which was used by CSTB to monitor compliance during an audit of the manufacturer. Particular attention was paid to the post-curing process for the ribbons. The manufacturing controls defined in the ATEx file were supervised by members of the Bougyues construction teams. In September 2019, the first ribbon left the factory.

Shortly afterwards, experts from the ATEx commission gave approval for the design, manufacturing and installation technique for the composite materials facade. In their technical appraisal, they made specific mention of the quality of the technical file submitted by the grouping.

The first ribbon was installed on the building in April 2020. Edouard Jaffre, from Bougyues Bâtiment Ile-de-France Rénovation Privée, was in charge of assembly logistics. The complexity of the project – keeping in mind that each piece is unique – was compensated for by the kind of materials and factory prefabrication. The level of precision used when producing each piece, associated with their light weight, made assembly simpler. The Latitude building was delivered in September 2021.

To update a 1970s building to a 2021 aesthetic within a very short timeframe, three French companies, Bouygues Bâtiment Ile-de-France Rénovation Privée, MECA and SIKA came together, each one contributing their know-how. This alliance, based on intensive use of composite materials, made complying with the architects’ initial drawings possible, all while ensuring the lightness and durability of the forms.

A portable solar panel made with supercar waste material