The COVID-19 global pandemic has forced many businesses to find new ways of delivering their goods and services. For London’s Advanced Composites Training (ACT), that meant developing new digital technology to provide the top-quality instruction that has made the company a global leader in composites training since 1996. ACT’s recently-launched augmented reality training uses the Microsoft HoloLens2 and software developed by New Brunswick’s Kognitiv Spark to offer live courses to students anywhere in the world. 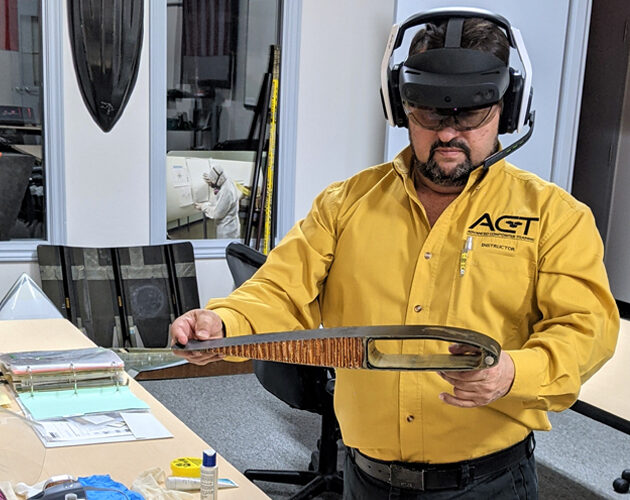 ACT founder, Wilson Boynton, believes his company is the first to use augmented reality to deliver intensive composites technology training for the aerospace, aviation, automotive, marine and renewable energy industries.

Composites are fiber-based materials – like carbon fiber – used in the construction of things like airplanes, ships, cars, and wind turbine blades. As the only privately-owned Canadian composites training institute exceeding both Transport Canada and American Federal Aviation Administration standards, ACT works with both civilian and military technicians from more than 39 countries.

Demand for composites training has remained strong since the beginning of the pandemic, says Boynton, prompting the decision to explore virtual training options. “Augmented reality allows us to project holograms that the instructor sees through the HoloLens,” he says. Students tune in from their laptop or other digital device. “They see exactly what the instructor sees. It’s like having someone looking through your eyes while you are doing the work,” he explains.

Reaction to ACT’s augmented reality training has been positive. “Clients are very satisfied,” says Boynton. “Students get the experience of being here, without having to travel.”

The launch of augmented reality training is the latest in a number of exciting milestones for ACT.

This February, Boynton enjoyed the thrill of watching NASA’s Perseverance rover land on Mars. Less than two years ago, he was invited to NASA’s Jet Propulsion Laboratory (JPL) to provide training in the composite materials used in its construction. “Composites made the whole thing possible,” he notes.

This April, ACT celebrates 25 years in business. The company plans to celebrate with a 25th Anniversary Virtual Open House on May 11. “People can take a virtual tour of our facility through the use of the HoloLens and learn more about our training options,” Boynton says.

While augmented reality training will continue to allow technicians from around the world to strengthen their composites knowledge without the inconvenience of travel – long after the global pandemic is over – Boynton believes it will never completely replace the in-class experience.

“Technicians are tactile learners,” he says. “Augmented reality training is an effective way to deliver the vast majority of the knowledge people need to be comfortable working with composites, but it will never completely replace hands-on learning.”