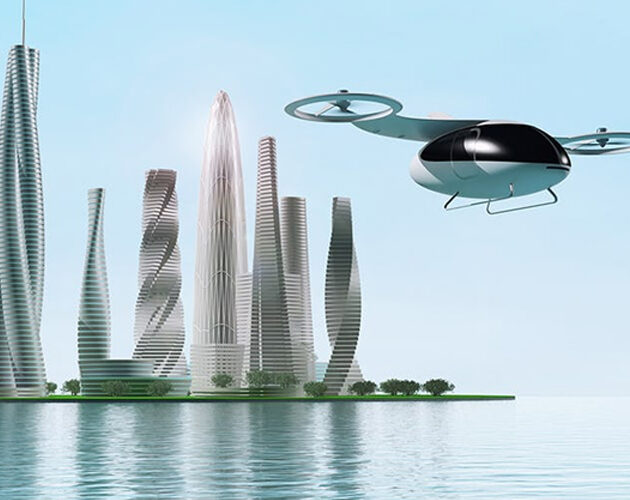 The concept of flying taxis is easy to hype. Everybody have all grown up with images of the future that include mass mobility in the air. It is one of the staples of any depiction of advanced societies and a trope of almost every science fiction movie or book (however dystopian). IDTechEx’s new report “Air Taxis: Electric Vertical Take-Off and Landing Aircraft 2021-2041” is not that hype.

This independent research into eVTOL aircraft for passenger transport reflects the reality of the eVTOL market at this early stage of its development.

Their analysis of air taxi / passenger drone operations within Urban Air Mobility (UAM) suggests that there are frequently talked about areas for air taxi deployment which simply do not look viable, offering commuters no perceivable benefit at a greater expense. However, IDTechEx’s research also indicates applications where eVTOL aircraft could provide a faster, more direct, and flexible journey, at a lower cost than competing transport modes. It is this potential which has attracted the attention of huge companies both inside and outside the aviation industry and stirred major investment into this nascent market.

Indeed, many of the world’s largest aerospace and automotive companies are ramping up their interest in eVTOL aircraft, recognising it as a potentially disruptive new transport mode. Incumbent OEMs like Boeing, Airbus, Embraer, and Bell have ongoing eVTOL development programmes. The major aerospace suppliers Raytheon, GE, SAFRAN, Rolls-Royce, and Honeywell, are all investing in eVTOL related technologies including electric and hybrid-electric powertrain components, systems for autonomous flight and advanced air traffic management systems. Furthermore, composite material manufacturers like Toray and Hexcel have been working with OEMs on the advanced lightweight materials required for several facets of eVTOL design. The automotive industry is taking an interest as well, with Toyota, Hyundai, Geely, Stellantis, Daimler, and GM, all funding, collaborating on, or conducting their own eVTOL projects.

Toyota invested nearly $400 million in eVTOL start-up Joby Aviation in January 2020, in a $590 million funding round that was joined by private fund manager Baillie Gifford, which famously invested early in Tesla stock at $6 per share. Baillie Gifford have also invested $35 million in German eVTOL OEM Lilium, recognising the long-term potential of this transformative emerging market.

Aside from Joby Aviation and Lilium, there are a host of interesting eVTOL start-ups around the world, including Volocopter in Germany, EHang in the China, SkyDrive in Japan, Vertical Aerospace in the UK, and Jaunt Air Mobility and Beta Technologies in the US, who are at various stages on the way to a commercial product. A number are now conducting manned test flights of their eVTOL aircraft. US eVTOL OEM Archer Aviation, who have made very little information public about their aircraft, recently announced their intention to become a publicly traded company via a merger with a special purpose acquisition company (SPAC). This deal would value Archer at some $3.8 billion. In addition to this news, Archer also announced a $1 billion order by United Airlines for its eVTOL aircraft. As the first eVTOL aircraft get closer to flight certification, interest in the market is certainly on the rise.

The new report “Air Taxis: Electric Vertical Take-Off and Landing Aircraft 2021-2041” contains detail on the reaction of aerospace and aviation OEMs and suppliers to this developing market, along with background into ongoing eVTOL development projects. They present journey time analysis for various air taxi applications as well as an investigation of total cost of operations for eVTOL air taxi services, with comparison against current helicopter operating costs.

eVTOL aircraft present opportunities for companies across numerous technology fields with significant challenges still to be addressed, especially in battery technologies to meet demanding high power, high energy density, and high cycle life requirements. These demands are leading many to look at hybrid powertrain options with either existing turbine and piston engine or fuel cells. The demanding requirements of electric powered flight offer a promising market for developers of many cutting-edge enabling technologies such as lithium metal batteries, advanced composites, and axial flux motors.

There are opportunities across the board, with first-mover advantage rewarded due to necessarily slow aviation certification times, to ensure safety requirements are met. Those to market first will have the opportunity to be the face of this electrifying new market as a brand leader at the technological forefront. For any company wondering whether they should investigate this market, the question is why not? The hard work being done over the next decade could pave the way for eVTOL to have a significant role in future mobility.