For the first time, luxury supercar maker McLaren Automotive is collaborating with APL to unveil an entirely new silhouette 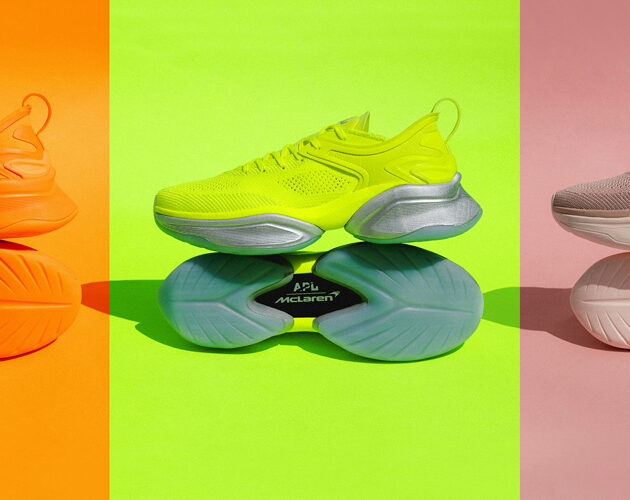 Inspired by McLaren’s iconic supercars and hypercars, the first offering from the collaboration is the limited-edition APL | McLaren HySpeed™, a breathtaking new silhouette designed as an all-purpose performance running trainer which marks the luxury supercar maker’s first footwear collaboration.

Born from innovation and rooted in technology, the history of these two iconic companies have followed a similar path that brings them together to form a new future. Whether it be on the court, the road or the track, APL and McLaren have always driven to push performance to new levels.

From APL’s patented Load ‘N Launch® technology designed to instantly increase vertical leap, to McLaren’s hyper luxury Speedtail and emphasis on reducing vehicle weight to maximize efficiency and experience, the desire to push the limits is at the heart of each company.

Combining the pursuit of performance and luxurious materials with world-class craftsmanship, state of the art manufacturing techniques and bold aesthetics, APL and McLaren represent the pinnacle of luxury and performance.

With such close parallels, the collaboration was naturally guided by McLaren’s design pillars to create a truly unique footwear collection. This has resulted in the development of a new range of footwear that progresses design, performance, technology, and construction in the luxury footwear category.

This one-of-a-kind footwear from the APL | McLaren collaboration has resulted in an entirely new silhouette being developed, the APL | McLaren HySpeed™, which is designed as an all-purpose performance running trainer launching in five bespoke colorways, directly influenced by McLaren’s supercars.

The APL | McLaren HySpeed™ features a three-piece segmented midsole with APL FutureFoam pods in the front and rear that are connected by a full-length lightweight carbon fibre plate topped by an all-new nitrogen infused midsole compound that is engineered for supreme responsiveness and energy rich compression.

Additionally, the shoe has a microfiber heel with extended wings and an internal advanced fitment system with three-piece cushion heel padding and APL’s signature Souffle Sockliner.

The outsole also references design details of McLaren’s supercars, featuring a tread pattern inspired by performance tires that are designed for speed and grip.

“It has been a pleasure to collaborate with APL creating the APL | McLaren HySpeed™ shoe. It perfectly embodies both our own McLaren and APL’s DNA and design philosophy. APL has developed new technologies specifically for this shoe – inspired by our ground-breaking work using lightweight materials – which also maximizes the wearer’s comfort and experience.

“Like stepping into a McLaren, it is all about optimizing performance, agility and speed.”
Goran Ozbolt, Acting Design Director, McLaren Automotive

“Over the past two years, the APL and McLaren teams have collaborated on countless design sketches, many different construction techniques, extensive product testing and rounds of samples to create the most unique performance shoe the market has ever seen.

“From original sketch to retail product launch, there have been three unique midsole iterations with proprietary compounds developed, multiple brand-new upper constructions using a wide variety of materials, and over 50 colorways sampled. The APL | McLaren HySpeed™ is truly an exercise in design and engineering excellence that was created through pushing the limits of what is possible in footwear.

“Working with McLaren has been a dream come true for us at APL. McLaren’s history in design and performance is unmatched and the team’s expertise and attention to detail truly shines in this collaboration. McLaren is one of the world leaders in the use of carbon fibre and the weave which we collectively created for the HySpeed™ is not only hyper functional, but it is also incredibly beautiful.

“One of the greatest commonalities between APL and McLaren is our quest to make beautifully designed products that perform at the absolute highest level, and that is exactly what we have done with this collaboration. The HySpeed™ is our most expensive in-line product to date and is the introduction of our newest pod-based midsole technology. The HySpeed™ features a three-piece segmented midsole with APL FutureFoam pods in the front and rear that are connected by a full-length carbon fibre plate topped by an all-new nitrogen infused, proprietary blended midsole compound that is engineered for supreme responsiveness and energy rich compression. The heel padding is modelled after McLaren’s ultra-lightweight McLaren Senna seats that are designed to hold you in place but are unbelievably comfortable.

“The APL| McLaren HySpeed™ is the culmination of years of work but is only the beginning of a long-term collaboration between APL and McLaren.”
Adam Goldston and Ryan Goldston, APL Co-Founders

The APL | McLaren collaboration comes in White/McLaren Orange, White/Black/Ombre, Rose Dust/Creme, Energy/Metallic Silver, and McLaren Orange is available for men and women and retails for $450 USD.

The APL | McLaren HySpeed™ will feature a special designed box that has almost as many features as the shoes themselves.

The box is a drawer style box with the outer sleeve being a combination of gloss McLaren Orange, metallic orange foil, and black foil logos. Pulling out the drawer you are presented with a black inner box and transparent smoked black shoe cover that displays the technical blueprint drawing of the shoe tooling.

Pulling the drawer out all the way reveals a line drawing of the McLaren F1 road car, one of the most iconic and desirable supercars ever made. For such a special collaboration, and special shoe, it deserved equally impressive packaging.