A collaboration between two of the UK’s leading experts in textile machinery has been launched to demonstrate the capability of new winding technology used in the manufacture of composite parts. 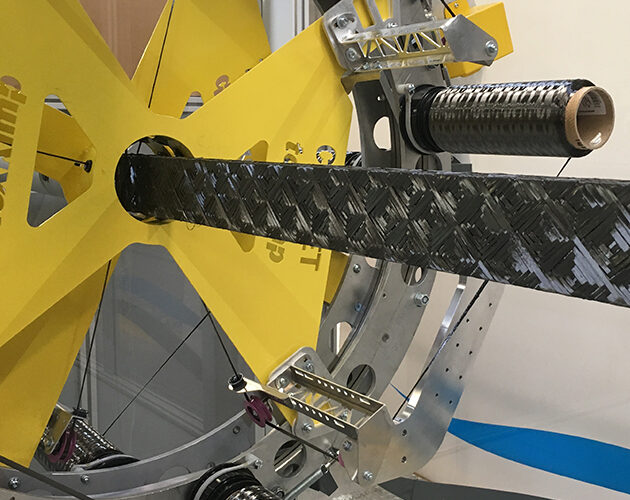 The research will be undertaken by the NCCEF, the commercial arm of the Northwest Composites Centre which provides independent, accredited testing and qualifying services to the aerospace, automotive, oil and gas, marine and wind energy industries, including all major primes and Tier 1 and 2 suppliers.

The 3D Winder is a robot-mounted, multi-axis, high-speed winding machine. Launched in 2018, it is the first winding technology of its kind capable of laying down very high volumes of fibre quickly and accurately to manufacture complex, curved composite components that are strong and repeatable.

The Multi Axis Winder (MAW) was launched in January 2021 and uses rotating rings to lay down large volumes of material at high speed around a static mandrel. This technology is a development of the 3D Winder but has been optimised for throughput and designed to manufacture long, straight, continuous composite parts with angles and slight curves, including aircraft wing spars, crash protection structures, fuel pipes, tubes, masts and other profiles.

The NWCC has been awarded funding and resources from The Engineering and Physical Sciences Research Council (EPSRC) Impact Acceleration Account to carry out and showcase the results of its work.

“Engaging the rigour of a respected, external testing body will help us to gather valuable data and demonstrate their uses and benefits to the industry with the aim of accelerating their adoption.

“We are confident that they offer unparalleled levels of speed and throughput at reduced capital cost; what the NWCC research will also show us is where these techniques sit in the process hierarchy in terms of the strength and impact resistance of the finished part.”

The project will be led by Professor Potluri, Director of the NWCC. Researchers will take a range of composite parts manufactured on the MAW, 3D Winder, a braider and a conventional filament winder and carry out a series of tests, including four-point bending, impact, and bending after impact testing, to investigate how strength and damage tolerance are affected by the manufacturing technique.

“Trials like these are extremely useful not only to validate new technology but to give commercial customers the insights to select the right technology for their business.

“The main purpose of our research is to quantify how structural performance and damage tolerance can be maximised depending on the method of manufacture employed.”

This is the second time the two organisations have worked together.

In 2018 they took part in a Knowledge Transfer Partnership which focused on a 9-axis winding concept first developed by Professor Potluri. That technology was further developed and commercialised by Cygnet Texkimp to create the 3D Winder.

“The University has a key role to play at the interface between academia and industry, supporting the commercialisation of innovative concepts that have the potential to transform manufacturing,” said Professor Potluri.

“Combining our knowledge and resources with those of a world-class company like Cygnet Texkimp means that together our work can have a real and positive impact on the industry.”

Cygnet Texkimp CEO Luke Vardy will present findings from the research project as part of the Composites World Tech Days: Composites in the Hydrogen Economy, exploring the role of 3D Winding technology in the manufacture of hydrogen storage tanks, on 18th May 2021.