The SM42-6Dn show, the first Polish hydrogen locomotive PESA, was probably the most anticipated premiere of the TRAKO 2021 International Railway Fair, and this was confirmed by the crowds of guests who filled the exhibition tracks. This event was also mentioned by Prime Minister Mateusz Morawiecki in a letter addressed to fair participants. 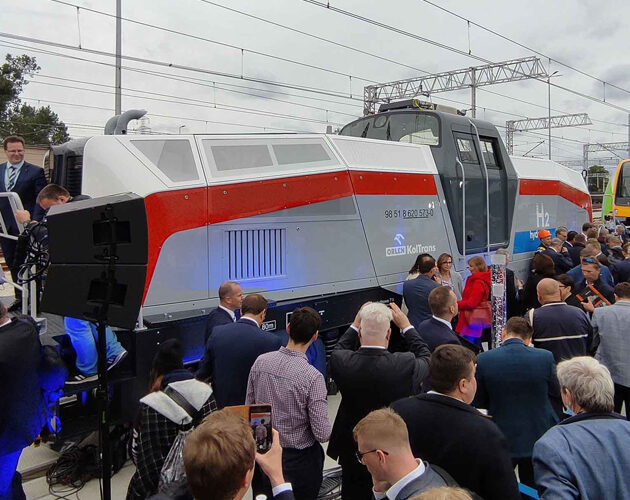 Prime Minister Mateusz Morawiecki wrote:
“This year’s TRAKO edition will include the premiere of the first Polish hydrogen locomotive – the result of cooperation between PKP SA, PKN Orlen and PESA. I believe that this particular initiative will be of key importance for accelerating the development of this type of technology in Poland.”

The importance of this event for the entire industry was emphasised by the Minister of Infrastructure Andrzej Adamczyk in his speech.

Minister Andrzej Adamczyk said:
“In the European Year of Railways, it is a symbolic premiere. The implementation of hydrogen technologies in rail transport may be of key factor CO2 emissions redcution, and PESA, a Polish manufacturer, consistently implements hydrogen powered rail vehicles, confirming the competence and innovation of our industry. This locomotive is the beginning of the road to Polish passenger hydrogen-powered train and another step on the way to the goal of a safe, comfortable and ecological Polish railway – congratulations and fingers crossed for the success of the project”

Paweł Borys, President of the Polish Development Fund, who was present at the premiere added:
“The premiere of the PESA hydrogen locomotive confirms the enormous development potential of the company, which has successfully undergone a very difficult restructuring process. The company is back on track, it carries out production, delivers new vehicles to customers on time, and most importantly – it looks to the future, has a strategy and a team that can build innovative vehicles that can be used to modernise the rolling stock in Poland and expand into foreign markets”

Two years ago, PESA made low-emission rail transport the basic assumption of its product strategy. The new Pesa Regio160 passenger vehicle platform was designed, among others, by based on electric drives powered by the overhead contact line or by electricity from batteries or hydrogen cells.

Krzysztof Zdziarski, President of the Management Board of PESA Bydgoszcz SA. added:
“In 2019, we established a special research and development team whose goal is to build prototypes of a shunting locomotive and a passenger multiple unit with drives using hydrogen- powered fuel cells. We cooperate in the implementation of these projects with strategic partners – PKN Orlen and PKP SA, to jointly undertake actions accelerating the implementation of hydrogen- powered rail transport on the Polish railways.”

The SM42 6Dn locomotive is a 4-axle shunting locomotive with 4x180kW traction motors. It has been equipped with an innovative power source, which is a zero-emission hydrogen drive. Two hydrogen cells manufactured by Ballard are responsible for generating energy. The 85 kW cell is a system that generates voltage in the chemical reaction of hydrogen with oxygen from the atmosphere. Hydrogen is taken from tanks with a total capacity of 175 kg. One refuelling allows for 24-hour shunting of the locomotive.

The locomotive was also equipped with an autonomous driving system, which allows the driver to control the vehicle by one person while setting up trains, and an obstacle recognition system (anti- collision).

The locomotive presented at TRAKO is a prototype whose production has just ended. Its concept and design are the work of Bydgoszcz constructors, and during its implementation, the company cooperated with many renowned domestic and foreign technology partners. They included companies such as ABB, Ballard, Worthington, Luccini, Rawag, TSA and CADD.

Lech Lipiński, head of hydrogen projects at PESA Bydgoszcz announced:
“This project is like a journey into the unknown for our entire team of several dozen. The prototype is ready, I am glad that we could show it at Trako, and after the fair, the next stage, i.e. tests and research, we want the locomotive to be put into service next year at the refinery in Płock”

After the modernisation, the SM42-6Dn not only gained an innovative drive, but also a modern look. The minimalist style of the vehicle body refers to the current trends. The most important change is the transfer to the central part of the driver’s cab, which is two-way, has a social area and an air-conditioning system. Due to the enlarged technical part, the side platforms were removed and the entrance was moved to the side of the cabin.

As part of the development of the Regio160 platform, PESA is working on projects for further low- emission vehicles. These include electric multiple units that are to be prepared to be powered by an overhead contact line, batteries or hydrogen fuel cells. The first hydrogen-powered PESA passenger vehicle is to be put on track at the turn of 2025/26.

As part of the hydrogen vehicle project, the company has established strategic cooperation with PKN Orlen and PKP SA, and will soon sign agreements with other partners who want to cooperate with PESA as part of the implementation of hydrogen technologies in rail transport.