Purdue, collaborators to “put a flag in the ground” for in-space manufacturing 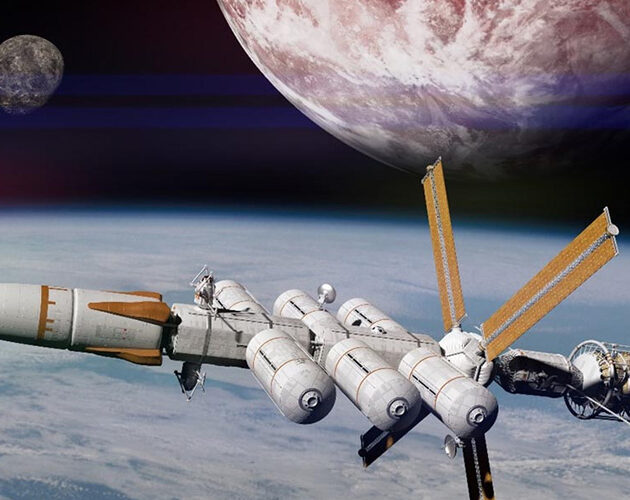 Through NIST’s Advanced Manufacturing Technology Roadmap Program (MfgTech), more than $3.25 million has been awarded in 2022 to universities and nonprofit organizations to develop manufacturing technology roadmaps to strengthen U.S. innovation and productivity across entire industry sectors. In April, NIST announced funding for two other projects in which Purdue is the lead institution or a partner university.

UNH and collaborators were awarded $297,877 to explore a new paradigm in manufacturing for the equitable commercialization, industrialization and democratization of ISM. To create the roadmap, researchers will analyze barriers to commercializing a space-based manufacturing economy, recommend solutions and develop guides that will help strengthen U.S. leadership in space, economic growth and national defense.

The space commerce economy is projected to reach $1T within the next few decades. Space commerce demands space infrastructure, and ISM is critical to delivering that.

“If we are going to build the economy between here and the moon — if we’re going to put that flag in the ground — the first thing we need to build is infrastructure. Manufacturing is the very heart of that infrastructure,” Malshe said.

The team, along with industrial, government and academic partners, will analyze technical and commercial gaps for a space-based manufacturing economy, such as in low-earth orbit (LEO) and on the lunar surface.

“My dream of building a manufacturing factory in space was launched in 2018 when my son (Harsha) and I competed and won one of the top two spots in the NSF Manufacturing Blue Sky Competition — also called the David Dornfeld Manufacturing Vision Award,” Malshe said. “That is our passion, as space commerce will need fundamental and applied research in physical and digital space infrastructure, a skilled workforce, an entrepreneurial ecosystem, and an equitable and trusted space delivered by convergent manufacturing.”

John Vickers, principal technologist for advanced manufacturing at NASA, is one of the project collaborators.

“NASA is very interested in this roadmap effort to explore transformative approaches for in-space manufacturing that aim to provide benefits both on Earth and in space,” Vickers said. “Advanced research and technology demonstrations will be essential for deep space exploration and development of commercial capabilities for future U.S. leadership in space.”

There is a growing demand for launching satellites, supplies and spare parts into space via rockets, which carries an expensive price tag, not to mention demanding efficiency. The long-term vision for the success of ISM must explore complex issues such as logistics and supply chain in extreme environments, operating manufacturing processes like 3D printing in zero gravity, maintenance, qualifying parts manufactured in space, gathering raw materials, building space-friendly robots, autonomous vehicles and many more.

“While manufacturing processes and supply chain systems have been optimized for the fabrication of products on Earth, extensive fundamental and applied R&D related to ISM must be conducted. Our roadmapping effort will identify and prioritize the technical barriers in order to accelerate the commercialization and democratization of space,” said Brad Kinsey, professor of materials science and mechanical engineering at the John Olson Advanced Manufacturing Center.

John Saiz, an industrial associate with IfM Engage at the University of Cambridge, will support the team by guiding the roadmapping activity and also by bringing valuable insights from his past career at NASA’s Johnson Space Center.

“This also signals to the world that Purdue and its partners are serious about taking the lead,” Malshe said. “We are humbled to be getting a grant from NIST. We are enthusiastic that we are getting an opportunity to be at ground zero of Space 2.0 as pioneers.”