Scheurer Swiss supports the focus project «Daedalus» of ETH Zurich with its engineering know-how and networks the project team with partner companies. 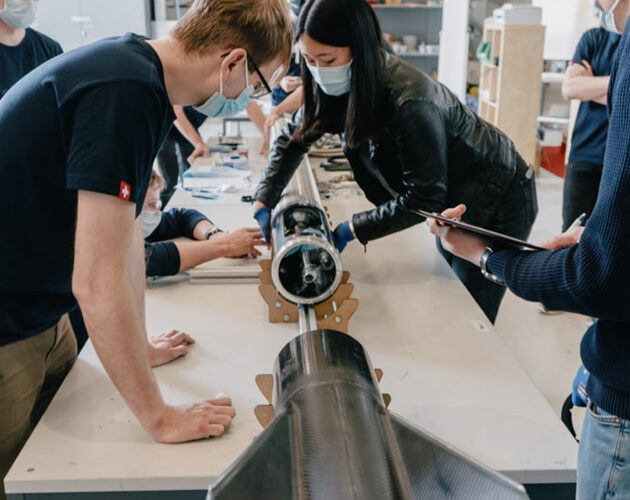 The engineering company Scheurer Swiss GmbH, known for its many years of expertise with fibre composite technologies, is supporting ETH Zurich’s «Daedalus» project as a sponsor with its engineering expertise and is networking the project team with the right companies to produce the third generation of the hybrid rocket motor for this year’s ARIS «Piccard» rocket.

Six space-loving ETH students are pursuing the concept with the goal of using the hybrid rocket motor to reach an altitude of 30,000 feet (about 9,150 meters) and win this year’s largest academic rocket engineering competition in the world, the Spaceport America Cup, as well as the first university rocket launch competition in Europe, EuRoc. Its hybrid rocket engine has just successfully completed static field testing and is ready for the first hybrid flight in ARIS history.

Development of the third generation of the ARIS hybrid rocket engine

The «Daedalus» focus project supported by Scheurer Swiss is part of ARIS – «Academic Spaceflight Initiative Switzerland» – which was founded in 2017 by students at ETH Zurich to promote spaceflight in Switzerland. Together, budding engineers, scientists and economists have since been developing systems for aerospace with the goal of advancing humanity by developing systems for space.

As part of ARIS, the «Daedalus» focus project is designing a third-generation hybrid rocket engine, which will be incorporated into this year’s ARIS «Piccard» rocket. What is special about the way a hybrid rocket engine works is the combination of a solid fuel with a liquid oxidizer. The coexistence of the two different aggregate states until immediately before ignition results in a high level of safety, as unintentional ignition can be largely prevented. With the help of this engine, the rocket is expected to reach an altitude of 30,000 feet (about 9,150 meters), leading the six-member «Daedalus» development team of mechanical engineering students from ETH Zurich to victory at the world’s largest academic rocket competition, the Spaceport America Cup in New Mexico, and at the first university rocket launch competition in Europe, EuRoc in Portugal, in 2021.

The project kicked off in September 2020, and after the concept and design phase, which was supported by valuable input from industry and research experts, the final design of the hybrid rocket motor was already in place by December 2020. The major challenge of the project is the integration of the engine into the «Piccard» rocket, as this places high demands on the design of the engine. For this reason, the six-member project team worked closely with experts in lightweight construction. «To achieve our ambitious goals, we depend on competent industrial partners in the field of fibre composite technology. Scheurer Swiss, with its many years of experience in high-performance composite engineering, was ideally suited for collaboration in our eyes, » emphasizes project manager and media spokesman, Aaron Ehrat.

After an extensive two-month test campaign, during which the performance of the engine in the rocket was tested, the «Daedalus» project team at ETH Zurich has completed the static tests on its hybrid rocket engine with great promise: «The course of the entire test campaign was extremely successful and the data collected shows that we are ready for the flight of our engine in the rocket. », says Adrian Fuhrer, Hybrid Rocket Engineer, and adds: «The great support that Scheurer Swiss provided us, especially at the beginning of the project, in the field of composite engineering and the networking with other competent partners for lightweight construction and fibre composite technology, was very valuable for us and made the project possible in the first place. »

Scheurer Swiss CEO, Dominik Scheurer, praises:
«ETH Zurich’s focus project «Daedalus» exemplifies how highly efficient technical systems with great potential for success can be developed with the use of fibre composite materials and lightweight construction technologies. We congratulate the «Daedalus» team on the successful test series and are pleased that we were able to support the team with our engineering expertise and network it with our partner companies in a target-oriented manner. Now it’s time to keep our fingers crossed for the maiden flight of the «Piccard» rocket in July! »