The NCC, in collaboration with Cranfield University and aerospace engineering specialists, Meggitt, has successfully developed and demonstrated a novel sensor technology for capturing data during liquid resin processes. 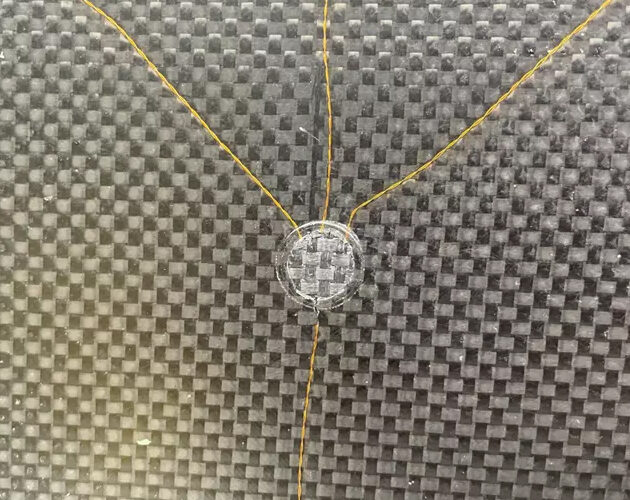 Research into dielectric sensors, which originated at Cranfield University, was further developed at the world-leading composites research centre through their Technology Pull-Through programme, and then applied in industry by Meggitt.

The sensor system is a significant step toward the digitalisation of resin transfer moulding (RTM) by providing accurate data capture of resin infusion. This can be used to validate computer simulations of the process, enabling industry to reduce the number of initial experimental trials, facilitate a ‘right first time’ approach, crucially reducing the time and cost spent manufacturing components.

Initial research into the sensors was led by Dr Alex Skordos, Reader in Composites Process Science at the School of Aerospace, Transport and Manufacturing at Cranfield University, before it was brought to the NCC. This was done through the successful Technology Pull-Through (TPT) programme, which partners with universities to evaluate and mature their low-TRL research ready for industry adoption.

Conducting trials of the sensors at typical aerospace material processing conditions of 7 Bar and 180°C, the NCC showed the sensors could precisely detect resin as it flowed inside the preform, as well as its cure progression – both properties invisible as the process happens. Furthermore, the sensors provided no adverse effects on either the process or part quality.

Upon hearing of the successful use of the sensors in the NCC TPT programme, Meggitt approached the NCC to use the technology in an ATI-funded project they were conducting with the NCC’s fellow High Value Manufacturing Catapult centre, the University of Sheffield Advanced Manufacturing Research Centre (AMRC), producing industrial scale aircraft components.

The NCC team worked alongside the AMRC and Meggitt to successfully integrate the sensors into a closed RTM tool, with no modifications to the tool being required. In trials, the sensors successfully captured data on the resin flow progression and degree of cure, agreeing with results from previous reports and theoretical models.

Dr Peter Karapapas, Principal Engineer at Meggitt, said: “We were interested in applying this sensor technology as a way of building in a smart function to the RTM process for monitoring part production. This is with the aim of minimising the time and effort required in post-production NDT and inspection on future components as we move towards digital manufacturing. The sensors were robust and effective during the demonstration on the large-scale composite housing part designed for a civil aviation jet engine air-oil heat exchanger.”

Dr Enrique Garcia, Chief Technology Officer at the NCC, added: “A large part of the NCC’s role within the composites industry is to enable the transition of technologies from academic research to being ready for industry to use and benefit from. This project is an excellent example of this, with it being developed in our Technology Pull-Through programme, and now being utilised by Meggitt.”