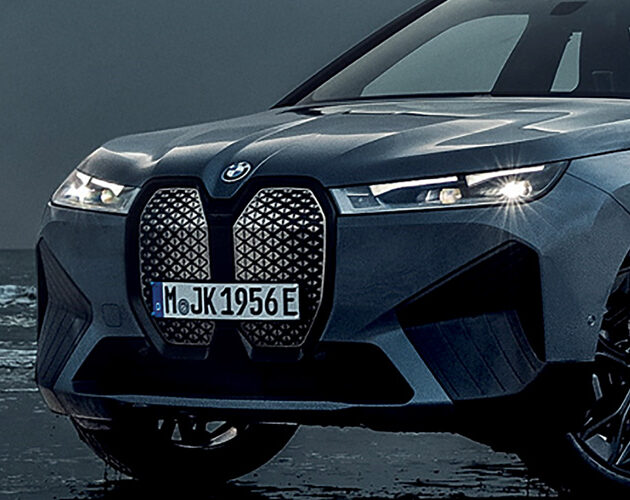 ln 2013, as a major milestone in the start of the BMW i3 series production, a carbon fibre-reinforced plastic (CFRP) body structure was manufactured in quantities customary for automotive series production. Although the component costs had already been signifi cantly reduced compared to the aerospace sector, the body structure was still not competitive with the usual sheet metal shell construction. A cycle time of well under three minutes and a drastic reduction in material costs had to be achieved for a component capable of large scale production. In addition to reducing the manufacturing cost of carbon fibres, the focus was on avoiding process-related waste. The demand for improved sustainability and recyclability led to a preference for thermoplastics as a matrix material for CFRP components.

For improved market penetration, the integration of the component into well-known vehicle production processes, including the paint run, was required. As a result, a signifi cantly higher temperature resistance of 180°C was required due to its passage in a furnace aft er Cathodic Dip Painting (CDP), without any disadvantages for the performance of the CFRP component.

The idea of skeleton construction

Taking into account the various requirements and the possible lightweight construction approaches (Figure 1), a skeleton construction concept was created for carbon fibre-reinforced thermoplastics (CFRTP). The core idea is to convert a multifunctional injection-moulded component into a structural component. At the same time, the use of continuous carbon fibres has to be limited to the main load paths. These are unidirectional carbon fibres contained in the rectangular profiles, which are impregnated with a thermoplastic matrix (black rods in the middle of the image).

The comparatively low cost for an injection mould as well as the simple adaptation of the materials, e.g. by varying the fibre content in the injection moulding compound, open an additional weight and cost reduction potential.

The idea was tested within the framework of the MAI Skelett joint project, which is part of the MAI Carbon leading-edge cluster. A variant for the skeleton construction was derived from the BMW i3’s front roof bow (Figure 2), with the goal to clarify many fundamental questions including the development of the forming technology for the rods and the boundary conditions for the adhesion between the rod and the injection-moulded material. Another focus was the use of fibres from the preform trimmings of the BMW i3 production as reinforcements in the injection-moulded compound.

The first component tests were decisive, showing a good agreement between the prognosis of the simulation calculations and the bending impact tests (Figure 2). Thus, the MAI Skelett project also technically confirmed the product geometry developed for the frame and the design calculation method. Furthermore, the economic potential of the skeleton construction method was substantiated and the remaining risk for a series application could be estimated in a qualified manner.

The specification of the unidirectional continuous carbon fibre-reinforced PA6 base as the core of the skeleton construction, which has to endure the most diverse load profiles, was significantly influenced by production considerations.

For reasons of lightweight construction, a high fibre volume content and a consistent, good impregnation of the individual filaments were desired. Among many possibilities, a CFRTP rod with a PA6 matrix and a fibre volume fraction of almost 50% was chosen, whereby a constant rod quality was achieved compared to the concept phase by optimizing the impregnation of the fibres and the profile formation.

After the primary requirements were answered in the concept phase, they had to be examined and confirmed in a 360° view of the product and its functionality in the vehicle. The challenge was on meeting the requirements for its overall integration into the vehicle, without the need for new body construction and paintwork processes. Lateral sheet metal tabs were used for integration into the entire vehicle (Figure 3b). These tabs reach clearly into the skeleton component to ensure force transfer. They can be used for the standard spot-welding process during the bodyshell construction. With these sheet metal tabs on the front roof bow, it was now possible to carry out complete vehicle tests.

As expected, both the paint flow and the following product properties could be evaluated as uncritical. Further developments in the design calculation were incorporated into a reference component, which was successfully tested as a real part (Figure 3d) in a roof pressure test, confirming the relevance of the skeleton component design as a structural component.

As part of series development, another sheet metal tab was required at the front (Figure 3b) in order to use the validated solution for gluing the front roof bow. In addition to the product requirements (e.g. crash requirements), series development also includes proof of stable production in large series with consistent product quality. Sustainability targets also had to be achieved, especially maintaining the weight advantage over the evolving sheet metal shell construction, in particular through minimal material consumption and the use of recycled materials.

Production of the skeleton components and integration into the BMW iX

The basic production concept was confirmed in series production, involving three process steps from the carbon fibre starting materials to the component. In the first step, the continuous fibre is impregnated with the PA6 matrix for the UD inserts, pultruded into a straight rod and cut to the required product length. In the second step, the rod is melted again and picked up by means of grippers. As the end gear is already adjusted by movements of the individual grippers, it can accurately be placed in the forming tool.

The heat stored in the formed rod and the melt-shaped injection moulding compound is sufficient to achieve a cohesive material connection and thus a good surface adhesion through heat equalization processes.

Starting from the straight CFRP rods, the metal inserts and the carbon fibre-reinforced injection moulding granules, all further processing steps are carried out in a production cell (Figure 5) around an injection moulding machine in the BMW Group’s plastics production unit in Landshut. The two skeleton components for the BMW iX, the front roof bow (Figure 3c) and the rear window frame are manufactured as front and rear roof front roof bow. The digitization potential is used directly, so that traceability from the injection moulding and rod production to the vehicle is possible within the framework of quality assurance

The insertion of preformed fibre-reinforced inserts proved to be an advantage as this leads to a stable position of the continuous fibres, which significantly impacts the component’s mechanical properties. In addition, the inserts had already shown during the concept phase that the (already minimal) shrinkage of the carbon fibre-containing injection-moulded material causes almost no distortion of the component, resulting in a very stable process. The third advantage was that a cycle time of less than 85 seconds could be achieved during injection moulding, although several parts are inserted and structural wall thicknesses of over 10 mm are present in the area of the CFRP inserts. Due to the body shop integration, the number of front roof bow parts is reduced from four to one, without the need for new processes. The same applies to the rear window frame, which also uses a skeleton construction. There is no change in the paint shop, as PA6 is non-critical as a matrix material and the difference between the KTL furnace temperature (approximately 180°C) and the melting temperature (220°C) is sufficient. Even at these temperatures, the fibre structure gives the skeleton components sufficient strength to withstand the forces in the body resulting from the thermal differences during heating and cooling.

As early as the concept development stage, software tools were iteratively used to simulate component design and test results (bending and impact tests). Design simulation tool tools were supplemented by process simulations. Good agreement of the component behaviour prognosis with the test results was observed after the first tests, which was further refined in the course of development. In the meantime, further details were implemented to facilitate component design while eliminating sources of error; for example, a routine that automatically generates cross-sectional consistency for the CFRP inserts. The use of wellknown series processes, which allows a clear geometric demarcation in the load or failure prognosis, as well as a good cohesive connection between the CFRP insert and the injection-moulded frame, allows good component dimensioning.

So far, component dimensioning has been purely iterative, in particular by manual adjustment of the short fibre-reinforced injection-moulded component, which, however, entails the risk of quickly losing the lightweight construction advantage in the design. A (semi-)automatic topology optimisation is not yet possible for this hybrid coating system with anisotropic material properties, especially for non-linear crash calculations. Although a two-material system composed of carbon fibres and a thermoplastic PA6 matrix is used, it is structurally necessary to consider a hybrid system consisting of the insert rods and the injection-moulded frame, which differs in terms of fibre length, content and orientation. For the injection-moulded component – with a comparatively low fibre weight of 15% – the use of a quasi-isotropic material can be envisioned.

The BMW iX’s front roof bow is a CFRP lightweight component that offers a 45% weight saving compared to the sheet metal frame. Due to the low input weight, the energetically-optimized carbon fibre production approach and the advantages developed in the component production, the CO2 footprint of the CFRTP skeleton construction is already better compared to the usually multi-part sheet frames made of high-performance WU steels.

In the first place, this good result was made possible by the advantages developed with the skeleton construction method: no production waste, which is a novelty for CFRP structural parts, and secondary use of carbon fibres in the injection-moulded component (Figure 4).

The new BMW iX’s front roof bow and rear window are standard components in the new skeleton design, demonstrating how this design can be implemented in series production with high construction standards (Figure 6).

Within a decade, it has thus been possible to reduce the cost of CFRP components for large-scale automotive production by more than 80% – compared to a predominantly manual production in the reference year 2010. Important milestones on this path were the BMW i3 and BMW i8 vehicles, which laid the foundations for this approach, and the community of the MAI Carbon leading-edge cluster, which formulated this cost target in 2011 combined with a 30-50% weight saving objective compared to metal materials. The structural CFRP components manufactured using the skeleton construction represent an unprecedented…..

Want to read the end of the article?
Register now and access to the entire article published in the JEC Composites Magazine N°147 !