SolidSail : the know-how of 5 companies from the Bretagne Sailing Valley condensed into a 66m mast

Recently, Chantiers de l’Atlantique lifted the veil on the first giant mast of their SolidSail project, intended for wind propulsion of cruise ships and merchant ships. This 66m long structure, assembled and revealed in Lanester, is the result of the work and expertise in composite materials of 5 companies from the Bretagne Sailing Valley®: CDK Technologies, Lorima, Multiplast, SMM (Société morbihannaise de modelage) and Avel Robotics. 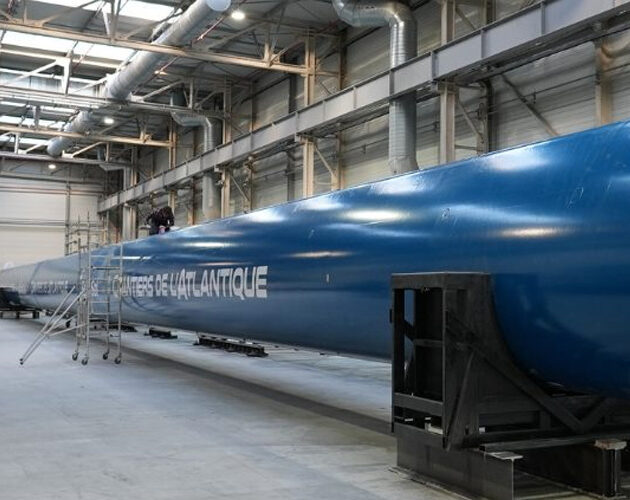 Staggering figures for a technological feat

The horizon is becoming increasingly clear for wind-powered ships. On Friday 9 December 2022, a new milestone was reached with the presentation of the first very tall mast ordered by Chantiers de l’Atlantique. The figures for this full-scale prototype, assembled and unveiled in Lanester, speak for themselves and bear witness to the technical and technological feat achieved:

The 20,000 hours of work required for this technological feat were carried out by a consortium of five companies from the Bretagne Sailing Valley®. Four are based in Lorient and one in Vannes. Signed in 2020, it brings together the expertise of companies in the Breton high performance composites sector:

“This project is unusual and out of the ordinary. We needed a variety of skills and production capacities to produce this part, says Luc Talbourdet, president of Avel Robotics. None of the five people involved could make the mast on their own. So the idea was to join forces for this project rather than not being able to do it individually and having the mast made abroad. You have to realise that this is an exceptional project. The size of the mast is double that of the Ultim class (35-38m).” Vincent Marsaudon, director of the Wichard group, of which Lorima is a part, and president of SMM, continues : “The ability to manage projects that CDK, Lorima and Multiplast don’t usually have has enabled each of them to contribute to the project and to respond fully to it.”

Also equipping ocean racing vessels, these five companies have synergised and leveraged their expertise in competitive sailing and ocean racing. “The ships are the Formula 1 of the seas, insists Luc Talbourdet. We are therefore used to a high level of demand from the teams in terms of prototypes.”

The breakdown of the SolidSail project

During this project, Lorima supplied the autoclaved prepreg mast sections and articulated the assembly and fitting of the fittings.

Multiplast has, alongside Chantiers de l’Atlantique, participated in the development of the sails and rigging of the future liners within the framework of research projects financed by the Brittany Region and Golfe-du-Morbihan-Vannes-Agglo. Multiplast produced the prototype sails that validated the concept of these large sailing ships.

Avel Robotics designed and manufactured the two handles that connect the three tubes of the mast.

CDK Technologies, which specialises in the processing of prepreg carbon composites, took charge of the manufacture of a 24-metre section. The company also carries out the high-pressure curing of the main elements of the mast, thanks to its oven.

Finally, SMM produced all the tooling required for the project: tube and sleeve moulds, assembly frames and draping tools. Its 100m long factory was used to assemble the mast.

A sail for cruise ships and freighters to reduce CO2 emissions

This mast of the future will house the SolidSail. A 100% composite, high-performance and foldable sail. Eventually, it should equip and propel the Silenseas cruise ship, currently under development in the warehouses of Chantiers de l’Atlantique, as well as sailing cargo ships. This sail and mast make up the fully automated Aeoldrive rig. Its 360° rotatable balestron and 70° tiltable masts should allow it to pass under bridges.

The aim of the Aeoldrive is to enable future ships to reduce their CO2 emissions. From 1 January 2023, merchant ships will have to calculate two indicators: the EEXI, the energy efficiency index for existing ships, and the CII, the annual operational carbon intensity index. The International Maritime Organisation (IMO) aims to reduce the carbon intensity of all ships by at least 40% by 2030. In order to achieve this objective, the IMO includes the use of diesel propulsion among the solutions considered.

According to Chantiers de l’Atlantique, SolidSail will reduce C02 emissions by 25% to 40%.

Towards industrialisation of production

This collective enthusiasm should continue in the future. “The objective is to make a pair of masts for a transport boat and to sign other orders, says Luc Talbourdet. The advantage is that we are the first to produce, on a scale of 1, a usable sail solution. This is an incentive to place orders. Our goal will be to meet the demand.”

How ? By going through the industrialization of the production of this type of mast. “A legal entity must be created between the five companies in the consortium and Chantiers de l’Atlantique, says Vincent Marsaudon. The challenge is to be able to count on a dedicated and robotised site to respond to the manual problems that we are experiencing, with difficult recruitment in our trades.”