Teijin Limited announced that the modern wing of the Stedelijk Museum Amsterdam featuring the world’s largest composite facade, made with Teijin Group’s Twaron® para-aramid fiber and Tenax™ carbon fiber, is celebrating its 10th anniversary this year. Teijin, which operates group companies in Europe under a regional headquarters located in Amsterdam, has been sponsoring the museum since 2007 as a cultural initiative inspired by the company’s philosophy of growing and evolving in harmony with society. 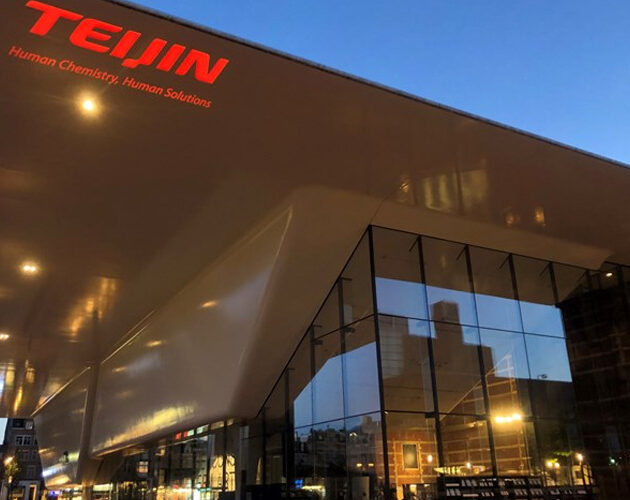 The design by Benthem Crouwel Architects was soon widely known as the “bathtub” due to its distinctive shape, features a smooth, seamless and shiny white facade and canopy incorporating 185 composite panels made with the Teijin Group’s Twaron® and Tenax™ advanced fiber materials. Measuring 100 meters by 25 meters and seemingly floating in the air, this world’s largest composite facade is a striking contrast to the museum’s original neo-renaissance building. Thanks to the design that keeps out rain and dirt and the use of Twaron® and Tenax™, this building proves to be practically maintenance-free, making it a sustainable construction that can reduce maintenance costs since opening in 2012 to the present. In addition, the smooth and pristine surface of the “bathtub” lends itself perfectly to projections of, among other things, video art, which amazes citizens and visitors from all over the world.

It was known that very large building components would be required to produce the facade, but this presented potential problems due to the thermal expansion and distortion of the components over time. Conventional building materials were rejected, but after a number of verifications were performed the builders selected resin-coated sheets made with a combination of Twaron® and Tenax™, which minimize the effects of thermal expansion thanks to the fibers’ strength and low coefficients of thermal expansion.

Twaron® para-aramid fiber produced by Netherlands-based Teijin Aramid B.V. and Tenax™ carbon fiber produced by Teijin Carbon Europe GmbH in Germany were combined with vinylester resin in composite laminates, forming the outer skins of a composite sandwich construction with a core of PIR foam. Whereas resin expands as the temperature rises, both Twaron® and Tenax™ fibers actually contract, therefore ensuring minimal expansion of the panels to realize a seamless look while creating significant structural stability. Unlike structures made with glass, metal or glass fiber composites, the ingenious design of the “bathtub” become a reality through the unique properties of Teijin’s high-performance fibers, creating a high-profile architecture in the center of Amsterdam.

Going forward, Teijin will continue to grow together with local communities and provide products and services that contribute to a more sustainable world.