The phenomenon of “tags“ vandalism has taken on increasingly aggressive connotations in recent years. The proliferation of “writers” and their “tags” also reflects negatively on the level of urban decorum, regardless of area or city. This is a problem that has nothing to do with Street Art, whose graffities are a cultural expression to be protected and enhanced. 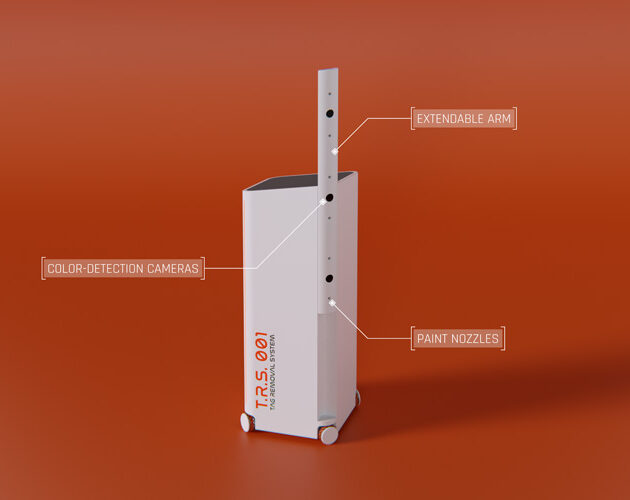 The spread of these kinds of tags, which are devoid of any value, inevitably impacts the perception of cleanliness of the environment in which citizens live and move, and this has an impact on the way citizens themselves treat these environments. The dirtier and messier they are, the greater the indifference and inattention to their state will be.

It is therefore important to be able to find a solution that will make tag removal faster and more effective, in order to not only counteract the phenomenon in the short term, but also and especially in the long term, deterring the writers from reiterating the act of vandalism by going to make their efforts appear futile in their own eyes.

These needs have been condensed into a project called T.R.S.001, an acronym for “Tag Removal System”. It is a robot that is responsible for geometrically and chromatically analyzing the wall on which it is intended to operate to remove the “tags” made on painted walls by covering them with one or more layers of paint.

The surface analysis phase is delegated to a set of cameras positioned on the front of the robot, in between the paint nozzles. These cameras accurately detect the geometry of the facade, recording the size and position of doors, windows, and gutters, as well as detecting the color of the paint already on the wall. Then, thanks to the presence of several canisters of paint of different colors in the body of the robot itself, the machine takes care of mixing them independently to obtain the right shade to be applied.

Thanks to a stem, made of light composite material, that lifts itself in height with a range of 1 meter, the robot can cover the entire ground floor, reaching a maximum working height of 3 meters. RGB LED strips are placed on the three struts to serve as indicators of the robot’s operating status, as well as proximity sensors that detect obstacles and pedestrians. Movement is made possible thanks to omnidirectional wheels: this type of wheel allows for accurate movement in both rotation and translation and for the possibility of achieving both movements smoothly and with maximum precision and stability. The body of the T.R.S.001 is made of biocomposite material in order to reduce weight and therefore energy consumption whilst improving the overall mobility of the robot.

The great automation of T.R.S.001 allows frequent action against this unpleasant phenomenon, restoring cleanliness and decorum, which in turn promotes attention and care for the public thing in all citizens.