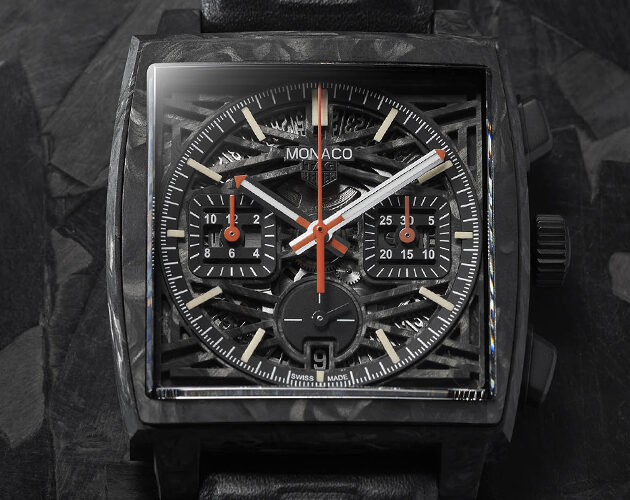 First held in 2005, Only Watch invites the world’s most prestigious watchmaking companies to donate exceptional one-off watches for auction, the proceeds of which will fund research into Duchenne muscular distrophy.

Since the first event in 2005, some mesmerising watches have been produced. At the last edition in 2019, a unique Patek Philippe sold for a world record sum of CHF31m. Over eight editions, Only Watch has brought in more than 70 million euros – 99 per cent of which, it says, has gone directly into research. It’s a wonderful story.

TAG Heuer has played its part. The 1/100th of a second Monaco Mikrograph of 2011 and the TAG Heuer Luxury Kit ‘Only Watch’ Special Edition of 2017 come to mind – both were highly complicated, one-of-one watches that helped define the company’s vision.

But this year’s TAG Heuer entrant is an entirely different proposition. The TAG Heuer Only Watch Carbon Monaco is one of the most ambitious watches the venerable watchmaker has ever imagined.

Its story starts with its noirish look – the case, dial and bracelet are all in some way black, creating a gloriously ominous profile that harks back to the watch collectors know simply as the ‘Dark Lord’, a black-coated version of the Monaco produced briefly and in apparently very small quantities in the mid-1970s.

But to the present and to the Only Watch Carbon Monaco’s case. It’s forged in carbon, which, as TAG Heuer aficionados will recognise, is not a first. That prize fell to the Monaco Bamford of 2018. But this case is subtly different, designed to hold the largest sapphire case back ever fitted to a Monaco and to showcase a special movement – of which more in a moment.

The bespoke dial is carbon too, and skeletonised by TAG Heuer’s partner ArteCad. Its evolved, sinewy aesthetic brings to mind the steel architectural forms of the industrial age into which TAG Heuer was born, as well as the struts of an open-wheeled racing car – symbols of a world TAG Heuer knows better than any other timekeeper. Each facet has been hand-finished using the traditional watchmaking technique anglage, adding further depth to the dial’s multi-dimensional appearance.

The story continues with the watch’s movement. Where a calibre might normally be obscured by a dial, here it’s partially visible, so has been hand-finished to perpetuate the bespoke narrative and to maintain the high detailing standards. But that’s only the tip of the iceberg.

At base, the movement is Heuer 02, TAG Heuer’s 80-hour in-house automatic chronograph. But again, this is no ordinary Heuer 02. Technically, it’s been upgraded with TAG Heuer’s carbon hairspring, making this the first and to date only Heuer 02, and therefore Monaco, to benefit from the innovative component. Developed by the company’s Institute, it’s said to improve chronometry, while also delivering superior resistance to shocks, magnetism and temperature changes, all of which can otherwise disrupt a mechanical watch’s performance.

As much the story is that the movement has been hand-finished in an entirely novel way, and in partnership with Artime SA, a company specialising in decorative techniques. In fact, there are 10 different finishes on the movement, including the so-called gratté technique that creates the dominant chequered flag motif. Alongside it are anglage, black polishing, circular graining, straight graining, perlage, snailing, sandblasting, chevron engraving and sunburst finishing. This, perhaps more than any TAG Heuer watch that precedes it, is a watch worthy of the fine-watchmaking label.

The unique elements continue in the strap. At first, it looks like it is made of metal, but in fact it is leather that’s been injected with silicon and moulded into the form of a bracelet. TAG Heuer says it’s never used this technique before – avant-garde strap-making indeed.

And then there’s the colour detailing. This year’s Only Watch palette is a gradient sunburned orange to yellow, which the watch picks up on in its hands and lume, and also on its rotor, which has a thin orange to yellow line that has been hand-painted by the celebrated micro-painter André Martinez. I’ve not seen this in the flesh, but I can only image it creates a dizzying Catherine wheel-effect as it spins.

All said, it’s a hugely memorable watch that somehow marries TAG Heuer’s avant-garde approach to watch design and movement creation with the traditions of fine watchmaking – savoir-faire and the spirit of innovation in a single package. A one-off, bespoke package that is.

The Only Watch 2021 auctions takes place on November 6 in Geneva under the patronage of HSH Prince Albert II of Monaco.

A portable solar panel made with supercar waste material