TaylorMade Golf Company builds on its history of groundbreaking innovation with the introduction of the Stealth™ Plus, Stealth and Stealth HD Carbonwood™ Drivers. 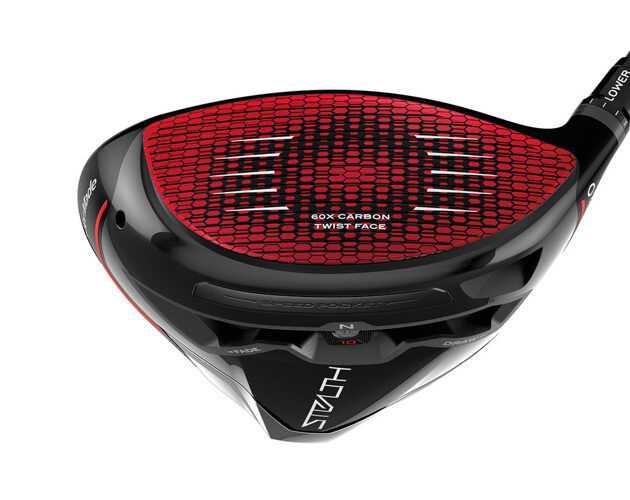 Titanium has been the cornerstone of driver technology for the last 20 years, but even at the beginning of the Titanium driver era, TaylorMade engineers knew that every material had its limit. The future of driver performance begins with the one-of-one 60X Carbon Twist Face – comprised of 60 layers of carbon sheets strategically arranged to optimize energy transfer.

Over two decades of research and development, TaylorMade pushed the boundaries and now created a new era of driver technology with 60X Carbon Twist Face drivers. Welcome to the Carbonwood age.

Brian Bazzel, Vice President Product Creation said: “In the mid-2000’s, our Research team developed an understanding that the weight of the face can affect impact efficiency, more specifically, the lighter the face, the more efficient the impact and the better the ball speed. We realized Titanium faces could only take us so far and carbon would be the face material of the future. This breakthrough design of a lightweight carbon face in Stealth, has created a whole new starting line, a new era of drivers, a new threshold of performance and a new platform for more innovation.”

The goal of any new technology is to create a measurable performance improvement for TaylorMade customers. The 60 layers of carbon fiber in Stealth help do exactly that by providing more speed. The red carbon face – yes, the face is red – delivers a higher COR and more precise face geometry through a lighter, but larger face.

TaylorMade engineers took advantage of the lightweight carbon material by creating a 26g face, which is 40 percent lighter than a titanium face of equivalent size. Because of that weight savings, the face size of Stealth is 11 percent larger than SIM2 and SIM2 Max drivers and nearly 20 percent larger than the 2020 SIM driver.

The weight savings and larger face size made possible by the 60X Carbon Twist Face delivered a stunning ball speed increase during player testing when comparing Stealth Plus and Stealth to the 2021 SIM2 and SIM2 Max drivers at better player swing speeds, unlocking a whole new level of driver performance.

TaylorMade’s 20-year journey to change the face of golf was made possible by an innovative nanotexture cover that sits on top of the 60 layers of carbon. The nanotexture cover is made from a thin polyurethane layer that creates a strong and flexible striking surface which serves to optimize distance based on improving launch conditions in both dry and wet conditions.

This revolutionary technology creates the face texture needed to produce the ideal amount of friction between the face and the ball at impact to reduce spin at impact in dry conditions. The nanotexture face also features full-face scorelines designed to provide improved spin performance in wet conditions.

Tomo Bystedt, Senior Director Product Creation, Carbonwood Drivers said: “The technological innovation of our nanotexture technology brings the entire face together and was a key to making this driver a reality. Without this revolutionary cover design, we could not have achieved the launch and spin performance required to extract the optimal performance in dry as well as wet conditions. Once we added the nanotexture technology to the grooves, we were able to unlock the full performance of a carbon face.”

The combination of the nanotexture cover, Twist Face® and TaylorMade’s ultra-flexible Thru-Slot Speed Pocket™ was engineered to produce forgiveness on strikes across the face.

Despite a larger face, clubhead speed does not decline with Stealth. The asymmetric Inertia Generator creates advanced aerodynamics at the most critical phase of the swing – from the downswing to the moment right before impact.

This breakthrough design optimizes clubhead speed, while also allowing additional weight to be placed at the rear of the club to encourage higher MOI, high launch and improved forgiveness.

How does it sound?

Based on experience with older carbon headed clubs in the marketplace, it might expect the Stealth family of drivers to suffer from a muted and low-energy sound profile. However, through fine-tuned acoustic precision, engineers have been able to create a bright and powerful sound and feel profile that is true to the high standards of TaylorMade drivers through recent years.

The sound and feel of Stealth has had an even better average sentiment rating in player testing compared to SIM2 and Tour player feedback has been overwhelmingly positive.