Tecniplas is a precursor in Brazil of oblating Fiberglass Reinforced Plastic (FRP) tanks. Exactly ten years ago, the company introduced this system in the country, a technology that opened up a new market for FRP: that of the mega-tanks. 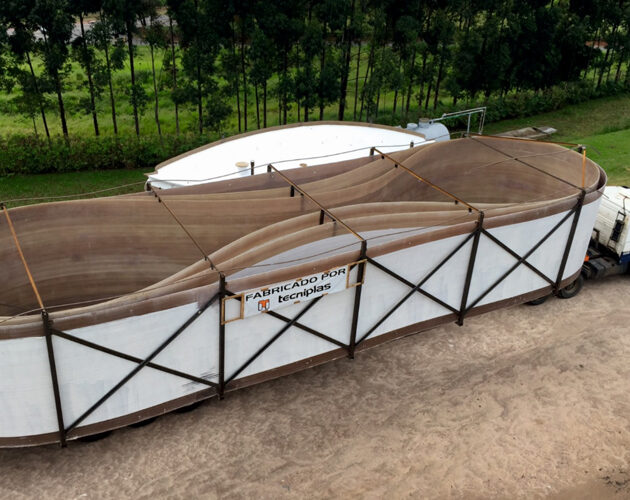 In general, the oblation allows the sections of the tanks to be ovalized and belted, assuming the shape similar to the number eight. In this way, a reservoir of 15 meters in diameter, after oblation, is 5 meters in size, adequate to Brazilian road transport standards. At the installation site, the sections are resized and manually laminated on top of each other.

“In the past, one of the barriers to the evolution of FRP mega-tanks was transportation. Until we brought the oblating technology from the USA,” recalls Luís Gustavo Rossi, director of Tecniplas.

Oblating can reduce transport time from 90 to 10 days. It also allows to transport, depending on the diameter of the tank, two or three rings in the same truck. “In other words, it means a considerable logistical gain”.

Over the past few years, Tecniplas has manufactured dozens of oblated reservoirs, most of which are dedicated to the storage of corrosive chemicals. “The history of applications in aggressive environments fully enables the use of our mega-tanks in the sanitation sector”, observes Rossi

With a capacity of 3 million liters and 15 meters in diameter, the largest FRP tank produced to date by Tecniplas – and the largest known in Brazil – was supplied in 2016 to a mining company.