The Class30 One Design, a new challenge for Multiplast

At the beginning of September, VPLP Design and Multiplast won the architectural competition which was launched by UNCL, RORC and the Storm Trysail Club for the design and build of le futur Class 30 One Design, an entry level one-design intended to make offshore racing accessible to a much greatest number of sailors. And so it is a great challenge in mass production for the Vannes yard. 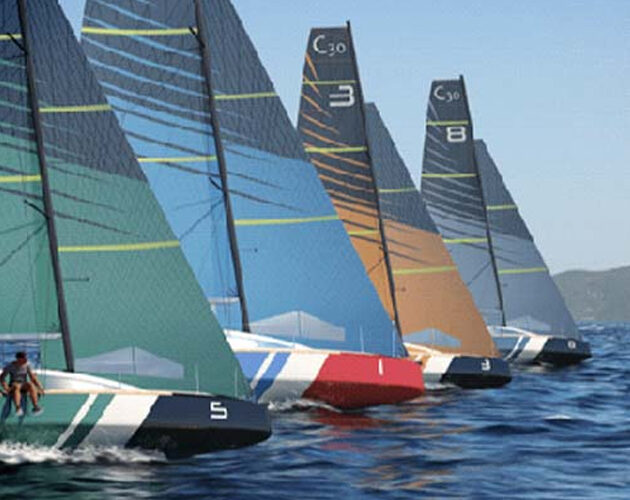 This Class 30 One Design project was born for l’UNCL, at the beginning of the year, as Yves Ginoux, the vice-president, explains: “When A.S.O. announced that there would be no Tour Voile in 2021 we contacted them to offer a different solution closer to the original spirit. In the end they chose to work with Normandie Evénement, but we continued to think about the ideal boat for getting into offshore racing. Talking with our friends from Rorc, we realized that at the very same time they were thinking about exactly the same subject, so we worked together to launch a call for projects in April.”

The initiative had resonance elsewhere as these two yacht clubs were immediately contacted by the Storm Trysail Club (STC) from across the Atlantic. They have twelve training stations in the United States and could also see great synergies with their needs and ideas and so wanted to join the project. The duo became a trio, the jury to select the best project consisting of four members of the UNCL, three of the RORC and the commodore of the STC.

An affordable one design boat
The specifications for the Class30 One Design are simple: a 30-foot one-design monohull, capable of accommodating 5 to 6 crew members. It is to be affordable, advertised for less than €100,000 with a regatta version, equipped with a carbon mast, a galley and a chart table, as well as ballasts.

Following the call for projects the three clubs received 25 applications, eight were shortlisted before being cut down to three. Finally the partnership of VPLP-Multiplast emerged victorious after extended conversations. What made the difference?

Ginoux reveals “First of all there is a real basic architectural strength. But there is a level of detail in, for example VPLP were the only one to take into account post-Covid elements, in particular by incorporating a moulding in the cockpit for six water-bottles of the crew, so as not to mix them up. Secondly because there was very clearly a real reflection on the industrial dimension with Multiplast.”

After a pre-production run of 3 to 5 boats which should be launched at the beginning of 2023 the objective is to move quickly to the production of one boat per week.

For Multiplast, the challenge immedialtely appealed
Yves Ginoux predicts: “Hundreds of boats around the world”, adding: “There is interest also from sailors who are going to do the Mini Transat and believe that the Class30 OD can to be a very good intermediate step before moving on to the Figaro or the Class40. It is a target that I had not identified and given the dynamism of the Mini class, it is very interesting.” And there is the promise of attractive financing solutions there already being “advanced discussions” with potential partners to finance the class and / or the racing circuit to the set up.

As for Multiplast, the challenge immediately appealed and the yard quickly accepted VPLP Design’s proposal. “It’s something different from what we usually do, we are generally more developing and building prototypes,” explains Yann Penfornis, the managing director. “But we still have experience in series production – we have manufactured 95 pairs of Figaro Beneteau 3 foils – and we know how to manage ambitious projects. All this, in addition to the mutual respect which we share with our friend and neighbours at VPLP who encouraged us to embark on this adventure together.”

The imminent schedule promises to be busy: “We still have to move forward in defining and specification of the boat with VPLP, then we will have to select the yard with which we will work with because though the construction will be supervised by Multiplast, the Class30 OD will not be manufactured only by us, we will outsource to meet the requirements for mass production and the economies of scale” continues Yann Penfornis, adding: “We have found the person who will be in charge of the project; it requires a lot of follow-up work with many trips to ensure that the project runs smoothly.”